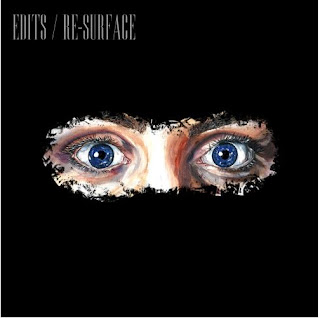 Re-Surface is the third EP from Manchester duo Edits featuring lead track Don't Speak which we featured late last year and four other tracks. It's an EP full of the dramatic electronic and vocal swooping and soaring that characterised their first two releases, but with a more direct sense of purpose. It's an impressive statement of intent from a band seeking to break out of the Manchester underground scene.

Opening track Tongue-Tied introduces itself with chiming keyboard and ethereal vocals from Liv declaring "I'm calling out, but I don't want to break the silence." What's immediately clear is how Edits use the dramatic intent of these songs to heighten their impact. Liv's voice is powerful, evocative and she does more than sing the words, she's living out the song, declaring that she won't be silenced.

Don't Speak continues in the same vein, a shimmering electronic wave underpinning the song and giving Liv's voice space to breathe in the verses or to have some subtle layered harmonies behind them and then taking control whilst she pauses in the lead in to the chorus and the middle section.

Let Me In is for us the highlight of the five songs in our opinion, Liv standing on the doorstep of a lover asking to be allowed in, pondering a thousand questions about what's happening to the song's subject. As the chorus kicks in, there's a half-spoken background voice dueling with Liv's uplifting soaring lead. The song moves through a number of sections that are very different without feeling disjointed, which is no mean trick to pull off and it feels like as a listener you're being carried with the song and the story.

Satellite slows things down a bit, a beautifully poignant ballad that starts with a solitary electronic piano that allows the real expressive nature of Liv's voice to shine through as she picks at the bones of a relationship, declaring "we're stronger together with thorns in our side" before Poison concludes the EP, starting with a repetitive electronic beat that allows Liv the space to paint the song's story before the chorus kicks in gloriously exclaiming "if you're the poison I'm the remedy", exploding out of nowhere, and then not letting the pace drop which means that the vocals lift to battle against the music to stunning effect.

Re-Surface is the sort of EP that an established band would be lauded for. Its production values are unfussy, uncluttered and despite there being a lot going on in parts, none of it clashes so it feels like a very together, easily accessible set of songs that the listener can either immerse themselves in and become part of the story or sit back and observe and let them wrap around you. For an unsigned band it's an impressive statement.