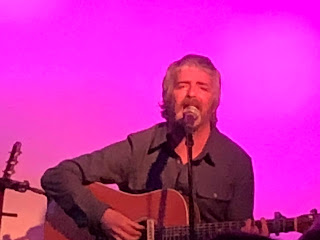 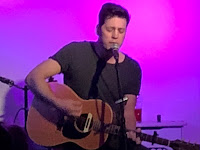 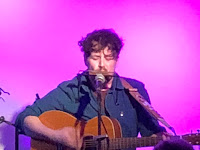 John Bramwell's first gig of 2018 was an intimate affair in the relaxed surroundings of Biddulph Arms. With support from Dave Fidler and Merrym'n, the respectful and attentive audience survived the furnace like conditions of the room and were treated to three very different but talented songwriters displaying their craft.

Merrym'n opens up proceedings and we knew nothing about him other than a description as the "cultural attache for Stoke-on-Trent" playing songs about growing up and living in the city that recently lost out to Coventry in the race for City Of Culture in 2021. Bear with us here because that prospect raised the same quizzical glance that you've probably just given as it sounds like it could be a terrible concept, and we've witnessed many open-mic singers who do this sort of thing atrociously, but actually isn't at all in this case.

In fact, Merrym'n's acutely observed stories about the infamous A500 Stoke ring road that often resembles a car park once the M6 endures its inevitable thrice-a-week closure or Cable Cars In Festival Park, about childhood memories of a garden festival held in Stoke in 1986 or even He Built A Cinema which tells the tale he read in the Stoke Sentinel of a guy who built a cinema in his backyard, steer well clear of the danger of quirky and throwaway as his songwriting possesses a real depth and he delivers the songs with a sense of purpose that you'd associate with the very best urban poets. The crowd love him of course because he's talking about the city that most of them have grown up and lived in forever, but we're mightily impressed at just how well he pulls this off. 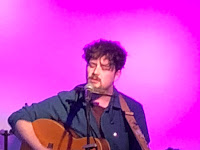 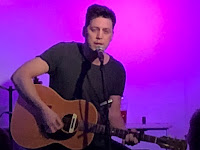 Dave Fidler's up next and he's given a warm reception by the crowd and it's clear that tonight's audience are a knowledgeable and appreciative bunch and they totally get the dexterity and talent required to play the guitar the way Dave does. His voice has got much richer and expressive in the few years since we first saw him and it makes new songs like Love And Electricity, the sort of beautiful yearning and wistful song that would have hearts breaking if released by a commercial name artist, and Can't Stand It make an even greater connection with the crowd. The instrumental Tommy gets heads nodding and possibly the best reception of his set as Dave's finger-style tribute to Tommy Emanuel allows him to show off a little.

By this time he's opened with Silver Spoon and Easy Gone Easy Come from his debut album I'm Not Here, two songs with a timeless feel to them even three years or so after their release. There's a warmth and genuine feel to the lyrics that accompany the guitar playing that this audience responds to in kind. He finishes with a cover of Simon And Garfunkel's Last Night I Had The Strangest Dream and leaves to a rapturous response from the Biddulph crowd.

It's just after nine that John makes his arrival on stage and the room is now at boiling point given it's standing room only at the back and the provision of heating has been generous to a fault, something that John alludes to laughingly later as being the warmest place he's ever played a gig before. Where John distinguishes himself from other musicians, and why people keep coming back to see him, is that a lot of what he does is impromptu, although he does laugh about him telling the same jokes at shows and amusing himself in the process, so there's no handwritten setlist. He pretends to use the two live CDs he's released as his setlist, but there's a feeling of spontaneity that adds to the magic of the evening, as does the beautiful crystal clear sound that would put much bigger and expensively furnished venues to shame.

That sound and the proximity of John to the crowd and crowd to each other make this feel even more powerful as every little worn world-weary lilt on John's voice can be heard through the now stifling heat. Whether it be songs from his extensive catalogue with I Am Kloot or songs from his new debut solo album Leave Alone The Empty Spaces, these songs feel so raw and vulnerable in this tiny room compared to some of the theatres John played before Christmas. Stripped down with eye contact from back of the room to the front unavoidable, they set the hairs on the back of the neck on edge, accentuated by the undivided attention of the audience which means there's none of the unnecessary chatter that can blight acoustic shows. 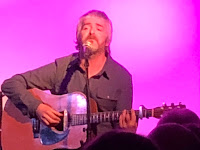 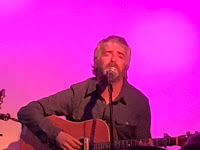 There's four songs from Leave Alone The Empty Spaces, two of which, his new single Who Is Anybody Anyway and the title track, are performed with Dave Fidler accompanying on guitar and harmonies. The former in particular feels particularly powerful with the sound of two voices coming together in the chorus. This is a new approach from the stark darkness of some of I Am Kloot's work, but these songs stand tall against the big hitters around them. Sat Beneath The Lightning Tree and Time's Arrow are yearning, wistful and questioning and they garner the same response as the more familiar material, again something that you don't ordinarily associate with singers going out on their own with new songs away from the band setting where they made their name. Although it's unlikely to make the same mark commercially as the last two Kloot albums, which are healthily represented here, it's destined, along with the songs already written for a second solo album, are likely to hold a similar affection in the hearts and record collections of his hardcore fan base and those that stumble across the record.

As ever John's between song chat is off-the-cuff, often unintentionally but more often intentionally hilarious, wondering how a guy in the front row managed to drop his pint without spilling it, ripping into his awkwardness at guitar tuning, laughing at his own jokes admitting they're the same stories he always tells and tonight regularly referring to the heat in the room melting his guitar.

His story about being a teenager writing Black And Blue when he was 16 and feeling that he had achieved everything he wanted to in life and regaling about the time he ended up being wine and spirits manager at a Tesco help him to seal the connection with the audience. Then when he finishes with the duo of Northern Skies and Proof and they politely join in with the singalong sections of them rather than the lusty beer-fuelled shouts of other shows. It brings to the end a beautiful evening of music in a location you wouldn't expect to see a top-ten album, Mercury-nominated artist play and to an audience that's completely atuned to the show and are hear to listen, appreciate and take in rather than for simple entertainment. It was a pleasure to be part of the crowd.

John Bramwell played Mouth On Me, To The Brink, No Fear Of Falling, Bigger Wheels, Time's Arrow, Bullets, 86 TVs, Over My Shoulder, Morning Rain, Sat Beneath The Lightning Tree, Masquerade, Black And Blue, I Still Do, The Moon Is A Blind Eye, I Believe, Who Is Anybody Anyway?, Leave Alone The Empty Spaces, The Same Deep Water As Me, Fingerprints, Northern Skies and Proof.