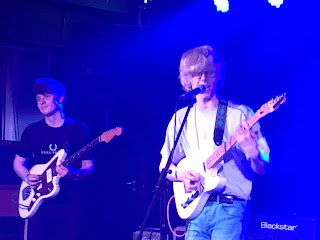 Kula Bay's first show of 2018 took place in the basement Manchester Club Academy on Friday night on a bill of bands with very mixed styles and fan bases. Their set though confirmed them as one of the acts set to make their mark this year as their developing confidence, innate sense of melody and the immediate hooklines in their songs didn't feel at all out of place in the biggest room they've played so far.

Opening up proceedings with your new single is a brave move, especially when it's only your second and theoretically should therefore be towards the end where a band puts their big songs so you remember them. Lost With You is one of those innocuous on first listen pop songs that you won't be able to shake though in the way that some of Blossoms' early tracks were. It also feels like a staging post to more already even before it's seen the light of day. The song that follows it, Make Up Your Mind, already screams single at those that are listening and some of the kids even start bouncing around to it, stopping their conversations and turning round, drawn in by the song's catchy rhythm and the seemingly effortless energy that pours out from the song.

They can slow things down too when needs be rather than just churn out different variations on a theme and there's an almost waltz like quality to Falling Behind, a song that allows Matt's lead guitar to take control and us to hear the interaction between David and drummer Oli's vocals. It's followed by One Thing That I Want, another song that helps convince us that we're watching a band with a real chance of making a significant breakthrough. The best bands, even in the early days of their life, make this thing look easy and Kula Bay do just that. Even in the couple of months since we first saw them upstairs here, it's noticeable just how much more assured they are. Gone are most of the nervous pauses and awkward silences between songs and (thankfully) the inflatables. 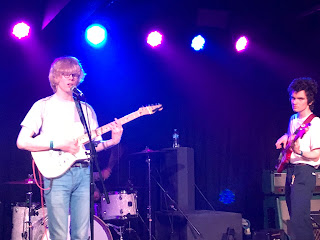 Fool is another song that has single written all over it, the sort of track that was made for being blasted out on radio, something that Kula Bay seem to have developed a knack of. Their penultimate song, 7 Hours, is the one that's already done that, being a staple on BBC Introducing Manchester and Liverpool and, live, it's beefed up a little without losing any of that punch that will remind you where you first heard it. It even manages to start a few people dancing from the big crowd of teenagers the band on before had brought with them. They finish with Beach At Midnight, slated to be their next single, and it's the perfect set-ender, combining so much of what's gone before style-wise and distilling it into a three-minute blast.

Like all bands on the learning curve that make it through there will always be evenings where it feels like no one is listening, when no one knows you. This will be one of those that Kula Bay will look back on and laugh about, but for those that had the attention to listen, they'd have witnessed a band that is developing into one that people will proudly claim to have seen tonight. Their upcoming gigs will be a different matter altogether.