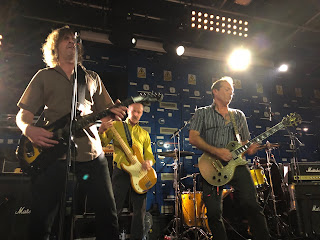 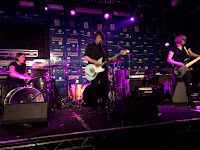 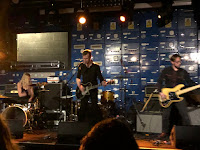 Ahead of the release of a new album Jericho Sirens in March and in support of the Sub Pop reissue of their three albums from 2000-2004, Hot Snakes rolled into Manchester with their furious barricade of unrelenting punishing three minute aural assaults that sent the crowd into a frenzied meltdown, pogoing and moshing. Support came from two Manchester bands - one of our favourites LIINES and Hopper Propelled Electric.

It's three-piece Hopper Propelled Electric that open up proceedings as the room starts to fill up. Stuck at the front of the stage, they dispense half an hour of what they describe as "pre-punk, post-blues anti-music" that gets a great response from the gathering crowd despite there being not a great deal of interaction between band and crowd, who possibly would have mostly not have heard them before. That aside though by the end they've won people over as there's clearly a connection between Robert on guitar and vocals, Debby on drums and Andy on bass that comes across and means that they don't look or sound out of place in here. The anti-music claim ends up being a bit of a red herring as they produce a set of songs that propel themselves along under their own steam, gathering momentum both within the songs and the set as a whole. They don't introduce any of the songs, but we recognise some of them from their album Be The Beast that we were impressed enough to pick up afterwards. They're definitely a band we'd recommend catching again and the response at the end of the set tells us that we're not the only ones with that opinion. 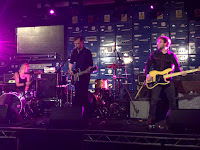 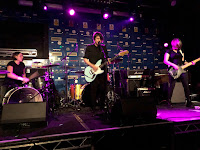 This is LIINES' biggest hometown gig and you can sense the excitement they've got in performing these songs, which save for two brand new ones, will make up most of their debut album that's coming out soon. In an ideal world they'd be headlining here, like Ist Ist did a few months back, as it's the size of room that their sound deserves. It's raw, whether it be the tribal drums of Leila that drive the songs along, Zoe's half-sung half-screamed words that leave her seemingly permanently on the brink of exhaustion and Tamsin's effortless cool on bass that can spin a song on its head and change direction. With such sparse ingredients at their disposal they create a sound that fills the room, as we knew they would, and they go down a storm with an audience that's been around the block and know how great rock and roll music should sound.

Never There concludes their set and is still one of the most genuinely enthralling and immediate singles of the past few years and the one that got them their first wave of attention from a wider audience, yet they've built a set of songs now that gel together so that it's no longer the main course, but part of a much more inclusive and expansive experience. They start with a new song On And On almost as a statement of intent and the second one Look For You has an equally powerful impact. Their last single, the one-two punch of Disappear and Be Here, still sets the pulses racing and by the reaction they get tonight you sense that they've won themselves a whole new raft of admirers by the end of the night.

Opening with a new song is a brave move for any band in the position Hot Snakes are in, reforming with three albums that you can see mean everything to some of those that spend most of the eighty or so minutes they're on stage in a permanent state of motion, bouncing, happily slamming into the willing party next to them, lost in the music the way bands that matter to people make you get lost. Death Camp Fantasy though, like the other three new songs they play, doesn't veer away from the formula that has served them so well, and to be honest, as someone not too familiar with their work, they don't really need to. The impact they have is in the ferocious energy they generate, the intensity of their performance and the sheer joy that they seem to be having in playing together again that transmits itself to the crowd. They interchange drummers so that both drummers that have been part of the band in its various guises can both participate and feel part of the experience and you sense from the feedback from the other bands and the Gorilla staff, that this is part of the way these guys like to operate. 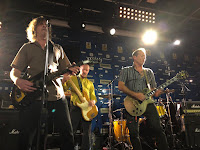 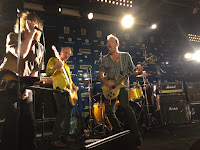 The energy in the crowd is more than matched by that on stage. John's drenched in sweat by the end of the first song, never stopping moving, mouthing every word as much as if he's a fan rather than one of the band whilst Rick's lead vocals transmit the power of these songs. Whilst many reunions seem to be a case of taking the money and running, this is far from it, you can see how much fun they're having. They joke after Gar Forgets His Insulin about him losing it at Crazy Pedro's the night before and they feed off each other throughout. They do play plenty of the old favourites too, the crowd singing back every word to the likes of LAX, Suicide Invoice, Hi-Lites and Retrofit as they work through each of the three albums that Sub Pop have just reissued. Like the other five hundred or so, we leave ears ringing because of the volume and drained by the non-stop intensity of the performance.

Hot Snakes' official site can be found here and they are on Facebook.