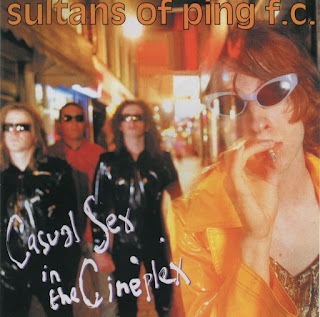 Casual Sex In The Cineplex was the debut album from Sultans Of Ping FC, a mysterious odd bunch from Cork who traded in magnificently bonkers songs for three albums back in the 1990s. Best known for the indie disco hit Where's Me Jumper? that still sets dance floors alight when it's played to a room of forty somethings reminiscing about their university days, the time has come to reissue that album more than twenty five years on, enhanced by the inclusion of a raft of b-sides and the first CD release of tracks from their debut What About Those Sultans? EP.

It'd be easy to dismiss the Sultans as a gimmick, the love of shades and leather, the embracing of Japanese culture where they were ridiculously popular (the album starts with an introduction in Japanese and then an English translation and there's also a song called Japanese Girls dedicated to Shonen Knife) and lyrics that don't take themselves too seriously. Certainly the press at the time were dismissive to the point of ridicule at points in an era where grunge was king and these deliberately obtuse and wild Irishmen were seen as something as an anomaly to the trend. Yet they found themselves a loyal and devoted set of followers who've stuck by their sporadic returns, usually on a bill with some of the indie heavyweights of their time, to whom this reissue will be a timely reminder of more hedonistic fun-filled times.

Like most bands of that time they was an acquiescence that the perfect pop song should last three minutes or so and Casual Sex is full to the brim of these. You Talk Too Much (or 2 Much depending on which release you look at) is two minutes and eight seconds of pure dismissive sneering about a never ending conversation with the kiss off line of "you never shut up you talk too much" in a voice laced with vitriol whilst Give Him A Ball And A Yard Of Grass is full of clever and funny football references such as "a man can have no greater love than ninety minutes with his friends" that leave a grin on your face.

It's that sardonic and sarcastic wit that makes this album such an intriguing listen so many years later - Veronica manages to rhyme root vegetable with incredible and recyclable with likable to the sound of an off-key mouth organ then declares "you think you're not good enough for me, and it's true but I like you anyway" before a ridiculously out of place string section kicks in. Casual Sex could be absolutely terrible, even more so with the passage of time, but it retains its unique charm that made it stand out even back then.

The bonus tracks are, like most b-sides of the time, a chance for the band to let their hair down. Riot At The Sheepdog Trials ponders the age old question why "no one talks about Bulgaria on the news any more" whilst Eamonn Andrews This Is Your Life is a bizarre attempt at recreating the TV programme with a dead uncle and a piano teacher who molested him at school whilst the mouth organ they seem to love so much is very much present and correct.

Turnip Fish is a weird one, a slowed down track with a story of a fish who declares "the Sultans Of Ping are my favourite band" whilst Armitage Shanks is a eulogy of thanks to the urinal manufacturer "often did we use you, never did we thank you." There's a lot of humour too as there is on the album itself with He Thought I Was Your Best Friend recalls a conversation where "he thought the German sweeper system was a military manoeuvre." The three live tracks are a short reminder of the energy that the Sultans could, and still do, generate from an audience where both sides can let their hair down and go wild.

The reissue of Casual Sex In The Cineplex is unlikely to cause a critical reassessment of the legacy of The Sultans Of Ping or change anyone's mind, but it'll remind those that fell for their off-kilter charm that they were a band guaranteed to put a smile on your face. The extension of the set to cover the plethora of b-sides completes the circle. Whilst they were to go on to make two more records - Teenage Drug and Good Year For Trouble - this is the record that defines their little bit of history.

Email ThisBlogThis!Share to TwitterShare to FacebookShare to Pinterest
Labels: Sultans Of Ping FC