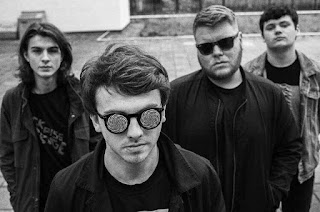 Proletariat are one of a new wave of bands from the Manchester area making their mark currently. The four-piece haven't been around too long, but already they're selling out headline shows of their own, capturing prized support slots and getting their message heard both in the city and beyond. This weekend they headline This Feeling's Big In 2018 night at Jimmy's in Manchester before their big show at Deaf Institute in March which is already close to a sell-out. We caught up with front man James to find out a bit more about them and what they're about.

Could you introduce the band and tell us a little bit about how you got together?

Proletariat consists of myself (James Cummins) on vocals and rhythm guitar, Connor Dolan on lead guitar, Aaron Hall on bass, and Luke O’Reilly on the kit. I’ve known Connor for over a decade now, and I always knew how talented he was on guitar, so when I decided to go forward and try and form a band, I knew he had to be in it. Soon after we drafted Aaron in and then started messing around with covers in our garage like most bands do at the start. The line-up you see today was actually completed after we’d played our first ever gig, when we drafted in Luke on drums, who played for the band we supported that night. We got our brains ticking, started discovering our agenda, and gradually got to where we are today.

The name Proletariat is an interesting one, particularly in these times of austerity and Tory rule, was it chosen to make a statement?

It’s been a word that’s stuck with me since my college days, I always loved studying sociology and Marxism and just society in general. It’s a term that I think defines us quite well, being from Mossley in Greater Manchester which used to be a very industrial town back in the day – its blue collar roots are what makes it just a beautiful and creative place. It simply means the working class – to me it means more to that, it means a group of people with something to say, something to stand for, a voice to be heard. I think more and more with our recent songs such as Kiss Of Death and Ignorance we’ve been consciously trying to make a statement. There’s plenty of people out there doing the same thing, it’s a great movement to be around.

You've recently been on tour with fellow Mossley band Cabbage. How was that experience playing out of Manchester for the first time and what did you learn from playing with a band that's made a breakthrough?

The tour was fucking great. I think it was absolutely vital for us to get something like that under our belts, and to do it with a great band who we consider to be our friends made it all that bit sweeter. We learnt an incredible amount during those dates, mostly about each other I’d say, but we also learnt about the lesser known (for us) side of being in a band, the constant travelling, waiting around, picking yourself and each other up, and staying healthy and ready to go. The Cabbage boys are phenomenal, the energy they conjure up every night is inspirational, and the support they showed us, both on and off stage during the tour was humbling, we can’t thank them enough for the experience.

You've also had a lot of support already, having been played on Radio 1 and BBC Introducing, John Kennedy premiering Kiss Of Death as well as quite a bit of written word about you. Has it taken you by surprise just how quickly things have happened since you released Mr Brown last year?

Without a doubt, we never anticipated this to take off the way it has. Being played on Radio 1 was astounding, I tend to keep a level-head about most things but when I found out we were being played by Huw Stephens I was running round the living room like a madman. Hearing our tunes played on Radio X is also surreal as someone who spent his teenage years growing up with the Boon-army on XFM. I think a special mention has to go to Natalie and Michelle at BBC Introducing Manchester, they’ve really got being us over recent months and it definitely helps.

What have been the other highlights of the band so far?

I’d still say our last headline show at the Soup Kitchen has been the best show we’ve played, the energy in that room was unbelievable. Although saying that, meeting John Squire of the Stone Roses at a show was mental.

This Saturday you're headlining the sold-out This Feeling show at Jimmy's in Manchester and you've got a big headline show at the Deaf Institute in March. Is this the last time we're going to see you eyeball to eyeball in such a small venue?

I wouldn’t like to think so. Even if things continued to go extremely well throughout 2018 and beyond, it’s the grass-roots venues that make history to begin with. Even if we end up headlining Reading & Leeds, I’d be eager to return to the sweaty underground basements just to get in people’s faces again – that’s the magic of live music for me.

What are your plans for the rest of the year, do you have new material coming out and what can we expect tour-wise?

The plan is to keep growing and to keep writing, we want to connect with more and more people and verify ourselves in this great movement of bands I mentioned. We have a strong number of songs hidden away because we’re teases like that, with some even already recorded. I think the key is to not rush anything, we’re not going to release anything just because we can, we need to make sure every offering is as strong as the last, if not stronger. So we’ll be constantly writing over the next few months, and who knows what we’ll create, but I can promise it will be stellar. Gig wise, we’ll have to wait and see… the shows are getting better and better every time, and we’ll always go out of our way to make sure it stays like that.

If you had to sum the band up to someone who'd never heard you before, how would you describe yourselves?

Energetic, frantic, passionate… a raw commentary of the state of the nation fuelled by filthy riffs, raw vocals, and the love of live music.

They play a sold out show at Manchester Jimmy's for This Feeling (January 20) and they're close to selling out Manchester Deaf Institute (March 23 - tickets here).