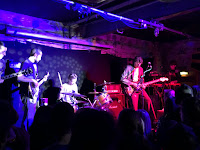 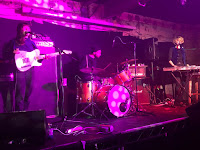 A packed Friday crowd crammed their way into Soup Kitchen to witness California's Wand come to town to plug their fourth album Plum with Switzerland's East Sister in support. They were rewarded with a set that was eclectic, eccentric and interspersed with moments of brilliant outsider angular pop tones from a band that sought to engage its audience at times and at others lose themselves in the moment.

It takes us a couple of songs to get East Sister then it all slots into place. Perhaps it's the sometimes variable sound of the venue or the chinless wonders who we move away from to avoid their inane conversation, but there's something that strikes a chord about three songs in. There's a dreamy ethereal quality to the delicate combination of Laura and Lorraine's voices that lift songs like Pale Sundays, Bluest and Highway into the stratosphere and shut people up whilst Amadeus on drums seems to be playing a completely different song freeform that somehow works perfectly. They don't say much, we only get their name from buying the CD after the show, but we, like most of the now packed out venue, were extremely impressed. 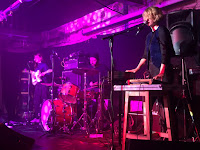 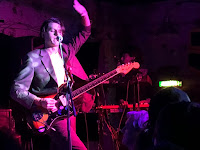 It'd be easy to focus on Wand's frontman Cory as he's quite the showman, not just in the way he uses his voice, but how he looks like he's living out every moment of each song like it's his last, whilst his band mates look on unperturbed, whether it be Sophia, the icy cool recent addition on synths and backing vocals that add light and shade the older tracks, or the way Robert's guitars, Lee's bass and Evan's drums craft the framework for Cory to transfix us.

The likes of Bee Karma and the title track from last year's Plum album are prime examples of a band that's found fluid grooves and rhythms that they can slip into and separate themselves from the psyche and garage rock comparisons they've endured over the course of four albums and find a little world of their own. It's ambitious in its scope, songs seem like they're about to stop and then, almost as one, they start up and take us on a detour to the end or, more often than not, seamlessly into the next song.

One minute you want to throw yourself headlong into the song with them, but then that twist on the song stops you and it's that which keeps the audience hooked and hanging on their next move. There's something genuinely unique in what Wand are up to, as if they're wandering musical minstrels trying to stumble on something that works for them whilst dodging easy comparisons, taking us on interesting journeys on the way.

Wand's official site can be found here and they are on Facebook.

East Sister's official site can be found here and they are on Facebook.