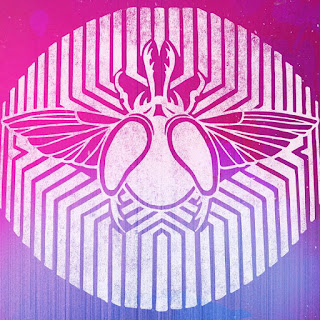 Afghan Sand Gang are another of the emerging new bands coming out of Manchester. Rather than adopting the full-on guitar approach of many of their contemporaries, they instead focus on the machine music that has given this debut EP their name. It's a record that doesn't seek to blow you away with volume or power, but instead adopts a more seductive mysterious manner in order to draw you in and win you over.

There's a continuity of purpose across the four tracks presented here. Electronic beats rather than guitar solos dictate the pace and direction of the songs, and the vocals never attempt to steal the show, but neither do they take a back seat. When they declare "holding your throat as I watch you choke" on  Mantra, it's delivered with undeniable intent that looks you straight in the eye with a steely purpose rather than an idle threat, and that style of vocal delivery is their modus operandi across the rest of this impressive debut. It works because it sits perfectly on top of the shimmering haze of the music, the two intertwined and inseparable, knowing what they're aiming to achieve and delivering it with an unwavering sense of purpose.

There's a tonne of influences at work here - soundtracks of obscure black and white otherwise silent movies, tripped out elements of the shoegaze and Portishead sounds that ruled the roost in the mid nineties and decades of the calmest psyche tones - but somehow, like so much of the best music around, the dishes they serve from their aural cauldron have a taste and texture all of their own, one that sits as easy on the palate of those who love rock music as those who tend towards the dance elements.

It's only on the final track, Descension, that they up the tempo a little, but it's then the turn of vocals to rein them back in, layered as the song progresses on top of the beats to ensure things don't get out of hand. The result is, like the other three tracks, a song that holds your attention, taking you along on its journey of discovery. Toxic Foreplay, track three, takes its sense of forebodance from its intro and spreads it over a haunting electronic keyboard line that's just on the edge of veering out of key before being coated in hypnotic vocals.

Machine Music is an intriguing debut, flirting dangerously out of sync with what's going on around it, but with the charisma and charm to draw you into it.

They support LA Witch at Manchester Soup Kitchen (June 27), The Rhythm Method at Manchester Jimmy's (July 28) and headline The Golden Lion in Todmorden on August 10.