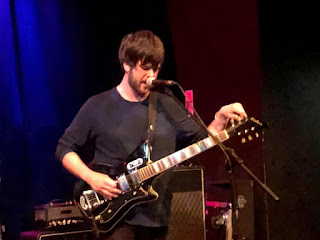 Déjà Vega brought their unique brand of noise to Band On The Wall on Thursday night as part of Shell Zenner's Amazing Radio Free Vibes night. A seven-song set confirmed their status as one of the most exhilarating live bands in town with their growing band of admirers joining in with the "DEJA""VEGA" call and response chant and them winning over a new set of curious onlookers with their at times vicious onslaught.

Blessed with one of, if not the best, sound set up in town, Band On The Wall is perfect for Déjà Vega's blistering noise, raw and visceral in the extreme. Whether it be Jack's ferocious guitar, shredding as he delivers Mr Powder, Mike's crucial but often-overlooked bass or Tom's tribal punishing drums that create the foundations and then build the walls of the towering aural canvas that  Déjà Vega construct every time they take to the stage. There's such an instinctive relationship between the three that they can take these songs to different places each time they play them.

They blast through the first three songs - Telephone Voice, new single Eyes Of Steel and Mr Powder - without pausing for breath. And if we're being straight here, there's not much they can say between songs that they've not said through what they've just played, the only reason to stop is to take breath before ratcheting up again. They're not solely noise merchants though, here to blow your ears off with volume. Another untitled new song, written in the last two weeks, shows that the instinctive relationship so clearly definable on stage transfers to their creative process that shows no sign of abating or resting on their laurels rather than exploring new sonic avenues.

They finish their set with a dynamic Pentagrams, a song that feels ever increasingly potent every time they play it, always seemingly on the edge of a catastrophic breakdown, but ever stronger for that tension. It's topped off by The Test, a ten-minute orgy of boundary breaking noise that has more ideas in it than most bands cram into a career. Those who know them lost themselves in the thrill of bouncing around, those that didn't stood agog at the sheer audacity of the song as it careered just in control from section to section. The chant rose again at the end like an involuntary response to what we'd just witnessed.

Déjà Vega are a one-off phenomenon, a magnificently imperious sound that's not for the weak-willed, but if your constitution can stand them, they'll blow your mind.

The 7" single of Eyes Of Steel, limited to 250 copies, can be ordered from their Bigcartel shop.