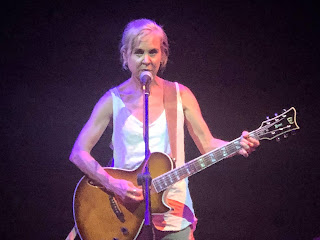 Kristin Hersh is on a short UK tour ahead of the release of a new solo album as well as an in-progress Throwing Muses record. Without a North West date we made the short trip across to Halifax’s impressive Square Chapel Arts Centre for an intimate one hour set of both solo and band tracks performed with just an acoustic guitar on a solitary stage.

There’s something about stripped down shows like this that bring the raw emotions of songs out into the open. Skinned of the studio and band accompaniments everything is laid bare, every little intonation of the voice, every subtlety in the plucking of the strings amplified and each painful sinew of memory revealed. The likes of Your Ghost, without strings and Stipe, and Cuckoo, with a bristling acoustic in place of the Muses’ off-kilter shuffle, feel even more revelatory as if everything is being laid bare. Kristin’s voice might be less angry these days than when she started out in this game, but its potency is deeper, richer and more world weary than ever before and she has the seated audience absolutely under her spell.

That’s not to say she doesn’t inject humour into proceedings. She introduces Sno Cat with a tale of a domestic disagreement that sees her dramatically storming out with car keys in her night dress like in the movies before realising the next scene is never in the film and ending up watching a guy drive a snow mobile around a garden because “he picked up the wrong keys.” Your Dirty Answer and the evening’s adieu Cottonmouth are preceded by the tales of where the songs’ inspirations came from whilst the two Muses songs from their last album Purgatoty / Paradise - Sunray Venus and Static - are both accompanied by comments on people hating new songs although the audience’s reaction sort of negates her argument.

The setlist cleverly hits most touchpoints on Kristin’s career without taking the most obvious routes via her best-known songs. So we get the likes of Gazebo Tree off Strange Angels, a cathartic Mississippi Kite off Crooked and the aforementioned Your Dirty Answer off Sunny Border Blue and Sno Cat off The Grotto.

The Throwing Muses selections delve into the deeper corners of the catalogue with Cottonmouth, You Cage and City Of The Dead being EP tracks. It’s testament to the depth of quality of Kristin’s whole arsenal of songs and the appreciation of the audience of it that this never even remotely is an issue.

In fact the only minor quibble would be the length of the set, although the sweltering heat wasn’t just impacting the crowd but Kristin’s guitar strings. That aside, with new albums on the way Kristin Hersh shows no signs of letting up her ravenous work ethic or letting the intensity of her performance even threaten to waver and neither do her reverential audience seem to want to move away from the table either.

Kristin Hersh's official website can be found here and she is also on Facebook and Twitter. Details of her Strange Angels subscription program can be found on this link.