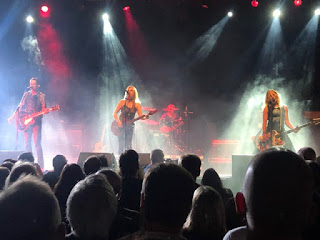 Belly made a triumphant return to Manchester after their comeback show in 2016 armed with their new album Dove and a set of old favourites from their two 1990s albums Star and King. A two-hour set split over two sections mixed old and new together with a real continuity of sound between songs written nearly twenty five years apart.

"We're a professional outfit really" Gail jokes as the band enter the stage and Tanya forgets her new in-ear monitors in the dressing room, continuing "we're going to put down a trail of wine glasses to guide her back to the stage." Throughout the night the camaraderie of the band shines through, Gail is a real jack-in-a-box, claiming her own stage to side of the speakers, engaging with the audience, but it's the chemistry between the four of them - Tanya, Gail, Tom and Chris - that is striking throughout the show. 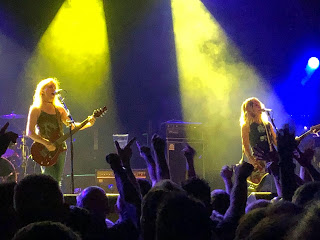 This impact is most noticeable with the new material, of which there's plenty to take in. Nine of the twelve tracks, if you include the beautiful bonus track Starryeyed that opens the encore with Tanya and Gail singing and just Tom on guitar and harmonica and Chris on drums accompanying them to awe-struck silence from the crowd, come from Dove. It's an album that translates perfectly from the studio to the live environment, the songs pack as powerful a punch as the better-known songs from the first two albums.

Singles Shiny One and Stars Align (with Chris for some reason wearing a seagull mask) stand tall against the likes of Feed The Tree, Gepetto, Slow Dog, Dusted, Seal My Fate and Superconnected whilst it's the melodic nature of songs like Faceless and Army Of Clay and the slight country hues of Artifact that make them such a powerful proposition. Best of the lot though is the night's final song Human Child where Tanya sings "I'm not here to save you, I'm just trying to get you outside" like butter wouldn't melt but with a wicked smile beaming from her face as she surveys the Manchester crowd that's fallen back head over heels in love with them again. 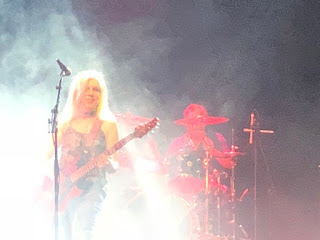 That professionalism Gail alludes to is clear to see, but not in the sense that they're simply running through a preordained setlist, they're clearly mixing things up as they see fit, Thief being brought forward into the main set, and the audience's attention is once more rapt in these quieter moments, before the next single comes in and sets everyone bouncing again. It's impossible to not to grin at Gail's exaggerated stage movements and her wickedly humourous lines in between song chat, whether she's encouraging people to party like it's 1993 or think she's one of the most amazing people on the planet rock when she's making light of her personal battles over the last two years.

There's some real crowd pleasers pulled from the back catalogue in addition to those singles mentioned earlier. White Belly, Red and Low Red Moon are greeted like homecoming heroes, whilst The Bees once again shows their mastery of the quieter moments that often gets overlooked in the clamour for the addictive hooks and melodies of the less restrained songs. 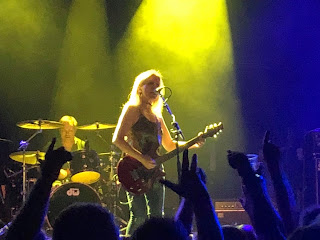 As they leave the stage at the end, the audience's reaction tells its own story - the love of those who'd stood by them has deepened and those rediscovering them feel that knot in the stomach of amour being rekindled. Belly are back and this time they're together as a unit and mean business, but they're also here to ensure that all of us have the best time, whether it be the interaction between band and audience or the way these songs just grab you and draw you into them involuntarily.