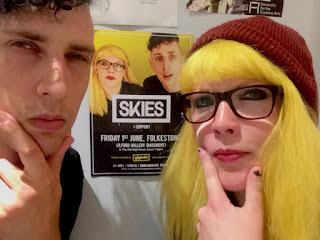 SKIES recently released their third EP X following their support slots with The Slow Readers Club. We met up with Alie and Jericho before the Nottingham date of the tour to discuss the songs on the EP.

Hi SKIES, you’ve got a new EP coming out called X. Why’s it called that?

Alie : It’s called X because the title track is called X and that’s called X because it’s a song about existence. I didn’t want to call it Unknown or something cosmos-y or weird like that. I was scrolling through the thesaurus looking for words that meant unknown and X appeared. And I thought that was quite cool and Jez didn’t think it was a stupid idea.

Jericho : Well, it took some coming round to it (laughs)

What else is on the EP?

Jericho : Pills is on it. There’s another single called Dusk with a music video and X obviously and then there’s a fourth track called Save Me.

The video for Pills was quite an interesting concept. How did you get the idea for those hundreds and thousands of pills?

Alie : When we were thinking about a music video, we thought it would be a travesty if it didn’t have pills in it so I thought wouldn’t it be weird if we have a room with thousands of pills in it so we came up with that idea and went for it.  We bought five thousand bright yellow pills.

How did you get them?

Jericho : The people who filmed the video got them off amazon, they were ridiculously cheap, £40 for 5,000 capsules.

Did anyone try one?

Jericho : They were empty. As you can see in the video, we had to put them in our mouths, which there is a clip in slo-mo, which I’ve got but isn’t in the video, where Alie has a mouthful of them and she gags and they all fall out.

Alie : It is in the video, but not with the slo-mo.  It’s the stupidest video, but it’s so funny.

So do you still find them around the house?

Alie : There’s still some around the house.

Jericho : We filmed it at my parents’ house and they keep finding them behind the house. They call it an infestation.

Alie : They’re moving out because of it. I’m sure the new people moving in will think what the hell happened in this house.

Alie : Can’t You Save Me, that’s a take on religion and the limits to that or on exploring that. It’s a short song, but it’s got one of my favourite instrumental bits that Jez has written. We knew it was a perfect track to end the EP. It felt right in the gut.

Jericho : We always like to have a good ending and outro and this felt like the perfect one.

Alie : We’re planning some more dates and we’re going to release more music videos from the EP so it’s like a year-long campaign for it. We’ll see when the dates are before we decide when to release the next video. November is always a good time for touring, and we want to jump on some support slots too and we don’t want the headline dates to get in the way if we can.

Do you find it a struggle being based in Folkestone to do that as not many bands come through that part of the world on tour?

Alie : We did do the scene a lot, we did Kent.  We’re trying to branch out so I don’t think it makes a lot of difference where we are.

You’ve done three Eps already, are there plans for a SKIES album?

Jericho : Yes and no. We are planning to do our album, we’ve got quite a lot of songs to go for it, but we’re waiting for the right time to start pulling it together really.

Alie : It’s probably a good time to consider it. We’re thinking next year, but when we’ve got songs together we also want to pitch them out or do whatever we feel is right with them.

It’s hard to tell when you’re going to get a break.

Alie : I think it’s important to have songs ready to go if we get a break, plan for the best and we’re trying to do that too.

The X EP is out on now. Our review can be found here.