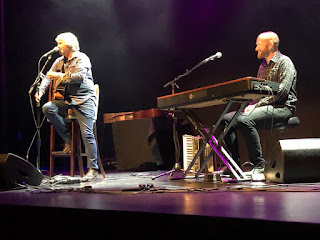 John Bramwell continued his never-ending touring cycle with a return to the splendid setting of Bury Met's newly-refurbished Derby Hall to play to an attentive respectful audience with a set of songs that spanned his career from early I Am Kloot records to his debut solo album Leave Alone The Empty Spaces and an as yet unreleased new song, accompanied by Alan Lowles on keyboards, accordion and bass.

It's a warm expectant atmosphere by the time John enters the stage just after nine o'clock. As regular attendees at John's shows will attest, these shows aren't the polished note-perfect dull as fuck acoustic performances you often get when singers in bands go solo. A John Bramwell show takes you on a journey, the setlist is often unscripted from a list of songs, the next one picked based on his mood at the end of the one before. He has tales he will tell every night, but there's always a slight twist on them that means you never get tired of them, but he'll often get distracted between songs and tell a story that's suddenly jumped to the front of his mind. Tonight his stories involve Nanette Newman's intense stare, losing his gig shirt before a posh Kloot show and having to play in a t-shirt looking like he'd made no effort, hitting a guitar tech in the face when he was trying to help change guitar and how his dog Henry beamed him a new song whilst they were stood at Crewe station. It's this randomness, this spontaneity that makes these shows never the same over two nights and therefore so entertaining.

Of course though, it's the music that keeps people coming back. Criminally undervalued by the industry because of his refusal to play the game that some of his contemporaries did and therefore achieved commercial success as a result, this set of songs, and the huge list that didn't make it, do their own bidding. Whether it be the songs from Kloot's debut Natural History - Bigger Wheels, No Fear Of Falling and 86 TVs - or those from his solo debut Leave Alone The Empty Spaces - including the title track, Meet Me At The Station, Sat Beneath The Lightning Tree, Times Arrow or the unreleased Days Go By - each song plays testament to John's songwriting craft, the ability to distil his own experiences and observations into songs that talk to his audience. It's why people are mouthing the words to everything and keep coming back to watch him. 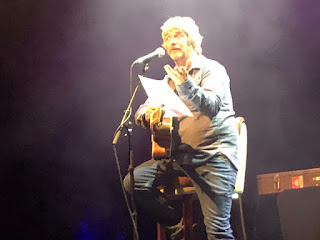 In between the songs that John performs solo are stripped right back to their bare bones, the way they were created at home with an acoustic guitar. The likes of Mouth One Me, From Your Favourite Sky and I Believe might have been added to in the studio, but here they possess a starkness that gives them even more gravitas. Even with Alan's contributions in the set, the inherent quality of the songs are what shines through, delivered with John's world-weary sage tones which allow them to feel like they're the result of having lived through the stories, experiences and emotions that exist in the songs.  Until the points on To The Brink, Northern Skies and Proof where John bids us to sing along, the room is full of people mouthing along to every word, because these are not mere songs, their words have defined important moments in people's lives.

John Bramwell played Bigger Wheels, Mouth On Me, I Believe, Meet Me At The Station, To The Brink, Gods And Monsters, Sat Beneath The Lightning Tree, Time's Arrow, Bullets, From Your Favourite Sky, No Fear Of Falling, Fingerprints, Days Go By, The Same Deep Water As Me, 86 TVs, Leave Along The Empty Spaces, A Strange Arrangement Of Colour, I Still Do, Northern Skies and Proof.

The album, alongside a companion Live in 2016 CD recorded at his shows in Manchester and London can be purchased from his official store.