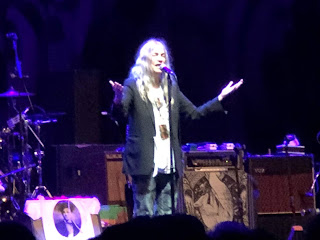 Patti Smith returned to Manchester Apollo as part of a short UK and Ireland tour to coincide with festival slots. In front of a reverential Manchester crowd, who chose this legend over the Stones down the road at Old Trafford, she held them spellbound in her oft outstretched arms as she mixed most of her best known work with an intriguing selection of covers and a series of natural witty and humorous between song anecdotes.

Opening with Redondo Beach, from her seminal Horses album, Patti set her stall out from the beginning. She might now be at the ripe old age of seventy-one, but there's not many performers out there who couldn't learn from the intensity of her performance, the energy that she summons internally or expels visually as she prowls the stage, challenges her band to push the envelope further or encourages the audience to delve deeper into the songs and let themselves be consumed by the music in the way she is. It's an intensity that's at odds with her playfulness between songs, informing us that we've eaten into The Rolling Stones audience down the road at Old Trafford and that they shouldn't charge so much for tickets before covering one of their standards Paint It Black with the aid of a lyric sheet which is dispensed into the audience once she's missed part of the song anyway.

In between songs taken from her two best known albums Horses and Easter, there's a mix of songs from her more recent past and a selection of covers including Midnight Oil's Beds Are Burning as well as two - The Strangeloves' Night Time (dedicated to Mark E Smith and The Jim Carroll Band's People Who Died - that are sung by Lenny and Tony with Patti taking a mid-set breather and topped off by a simple but gloriously emotionally charged I Can't Help Falling In Love With You dedicated to Tony ahead of his birthday on Thursday. 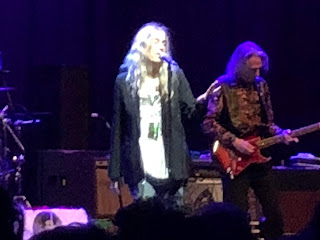 Moving through the catalogue, Summer Cannibals and Beneath The Southern Cross, dedicated to Sam Sheppard, come from 1996's Gone Again, whilst she fast-forwards to 2004's Trampin' for a poignant My Blakean Year. As the crowd is made up of devotees generally wise to the depth of her work over forty four years, the response is only slightly muted compared to the roar that welcomes in the opening bars of Because The Night, one of her generation's standard-bearing songs, and the soaring Gloria that concludes the main set, with Patti stood tall on one of the monitors spelling out first GLORIA and then MANCHESTER APOLLO, before jesting that we can now go and complete a college degree because we can spell. The encore concludes with a rousing People Have The Power where Patti compels us all to raise our hands skyward in a sense of protest that feels even more appropriate today in the extraordinary times in which we live than it's ever done. 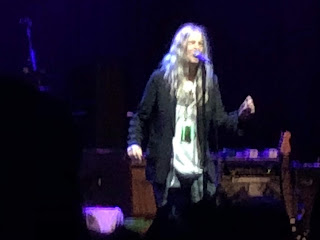 The rapport she strikes up with the audience is a joy to behold, whether it be telling us she was late because of losing her toothbrush, watching old detective shows on ITV3 on her day off, her phone losing charge as she was about to Instagram pictures of her coat hangars with some deep meaning or the way she seems so reluctant to leave the stage at the end, taking photos, encouraging us to ad-lib part of the Stones' Brown Sugar. There's a reminiscence that when she recorded Horses, she was hoping to live till she was thirty seeing that as an achievement and now playing these songs forty plus years later feels strange in that context. All this personalises the spell she seems to cast on her crowd; watching her perform you see how she's influenced the likes of Tim Booth of James and others in the way they lose themselves in the song but still connect with those in front of them.

Like many of those we've lost in the past few years, Patti Smith is a one-off, an artist in the truest sense of the word, creating something that makes a connection with an audience of all ages through both their music and the personality she conveys. It's impossible not to fall a little bit in love with her, even when she's making her message up on the spot, displaying a vulnerability that contrasts with the powerful message of empowerment and self-enlightenment of the music.


Patti Smith played Redondo Beach, Paint It Black, My Blakean Year, Ghost Dance, Beds Are Burning, Ain't It Strange, Beneath The Southern Cross, Night Time, People Who Died, Summer Cannibals, Because The Night, Pissing In A River, Gloria, I Can't Help Falling In Love With You and People Have The Power.