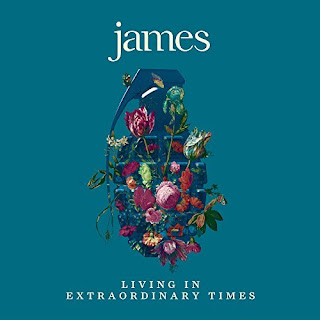 James have revealed the video for Coming Home Pt 2, the latest single to be taken from their forthcoming 15th studio album Living In Extraordinary Times, due for release on August 3rd. The video was filmed “on zero budget” in California by Tim’s long-time friend, director Leif Tilden.

The song deals with the issue of separation from children, in Tim’s case his son whilst on the road with the band, but like Upside from Hey Ma, could equally be applied to the plight of immigrant children and families separated by distance and politics. In interviews he’s spoken of it as a sequel to Come Home, hence the Pt 2 in the title.

Coming Home Pt 2 was originally written in the sessions for Girl At The End Of The World, but was completed for this album, it being the track Tim talked about in interviews that they couldn’t finish but wanted to return to. It features Brian Eno on keyboards.

It’s the first appearance of any of the band, other than live shots, in a James video since 1999’s We’re Going To Miss You (although Tim did appear in videos from his 2011 solo album Love Life.

Living In Extraordinary Times’ tracklisting is as follows :

with four bonus tracks on the deluxe CD

It is available in the following formats and a variety of bundles from the James store :

Everything other than the indies magenta vinyl is available from the band's official store.