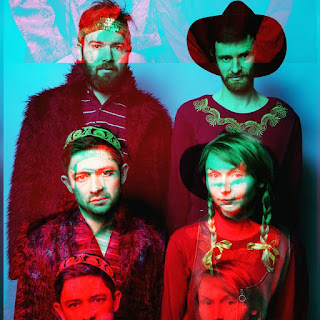 Manchester four-piece The Happy Soul recently released their second album Big Wow and launch it with a headline show at Salford's Kings Arms on Saturday. We caught up with them for a chat about the making of the album, their use of a string quartet and vocal harmonies and their plans for the rest of the year.

Can you introduce The Happy Soul please?

The Happy Soul are Mark Simpson on vocals and guitar, Mick Pauline on drums and vocals, Sally Mason on bass, keyboards and vocals and Jon Donohue on bass, guitar and vocals.

Mark usually writes the songs and then the rest of the band will work on them to make them sound like The Happy Soul.

You recorded the album at The Star And Garter? I didn't realise there was a studio there.

We had access to the whole of the pub for three days. Each instrument had its own room in the pub, and because of its open plan, we could see each other whilst achieving the required separation.

Where does the name of the album Big Wow come from?

Big Wow was something that was said at school that meant ‘So what?’ when someone was showing off.

Your songs make heavy use of vocal harmonies, for us a much under-utilised weapon these days. Does this come from the bands you listen to and have any particularly inspired you?

We are all big Beatles fans and from the start we wanted to not have an obvious front person. Also a lot of the songs are based on Gospel changes, and so the harmonies follow that structure.

You're playing the Kings Arms Theatre in Salford this Saturday with a string quartet. How did the idea of introducing strings to the live show come about?

There are six songs on the album that have a string quartet arrangement, so we wanted to recreate that live, and The Kings Arms Theatre has great acoustics. We also like putting gigs on with different mixed-media elements, so there will be some short films made by Garth Simmons, who was in charge of the art direction of the album.

Could you tell us a little about the video for I Heard It Said and the ideas behind it?

One of the songs on the album, Like Newly Born Stars, was inspired by a dream Mark had where he met himself as a child.

We wanted to recreate that theme but felt a more upbeat song would be a better balance for the tone. We also saw a documentary about these fat men in a town in Italy who are worshipped for the amount of food they can eat. They are weighed at the end of a competition and whoever has gained the most weight wins. The women of the village find these men the most attractive. So we wanted to put a bit of greed in the video.

What are your plans after this show? I noticed you're on the bill for Head For The Hills in Ramsbottom in September.

We are looking for more gigs around the UK . We would like to find some good support slots and are currently working on finding the right bands to work with. We also will start work on a new set of songs in the Autumn.

You released the album via Pledge Music. How was that experience?

Having never done it before, it was interesting to get an insight into how that part of the industry works. We were quite nervy when we were on 97% for a while!

How would you describe The Happy Soul to someone who hadn't heard you before?

A melodious vocals power-pop group in the tradition of The Beach Boys, Reuben & The Jets and The Impressions.

The album is available via their Bandcamp page.

Their track-by-track walk through the album can be found here.

Tickets for the launch show can be purchased here.

Email ThisBlogThis!Share to TwitterShare to FacebookShare to Pinterest
Labels: The Happy Soul