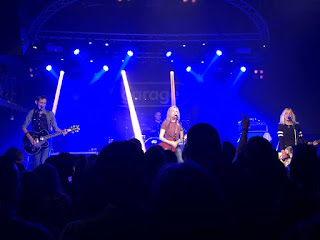 The devastating fire that destroyed the Glasgow School Of Art and the O2 ABC on Friday night had put this show in doubt. But the never-say-die spirit of the Glasgow music community saw The Garage step up and offer the use of their venue for Belly's show on Saturday night where they took the crowd's mind off the devastation a few hundred metres away with a two-set joyous combination of songs from their two 1990s albums Star and King and a heavy lean towards their wonderful comeback album Dove.

There's a real sense of the community coming together and a "the show must go on" spirit tonight , helped by Gail wearing her Saltire flag across her amp in deference to her grandmother who was born here and the relationship that the band had built with the city across the best part of twenty-five years.  It's a love between band and audience that's also reflected up on stage, whether it be gentle teasing from one to another of their touring habits, encouragement from Gail and Tanya to Tom for the solo in Shiny One or the way they catch each other's eye through the set and move closer and connect. 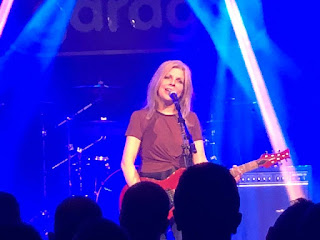 That connection on this tour is at its most evident on the new material, where the four of them have the excitement of playing songs from their new album Dove. It'd be easy to just drop a couple of new ones in and live on the nostalgia trip of the room full of forty-somethings that make up most of the audience. It's something Gail comments on, amongst other things as she charms the crowd with her between song conversations with the front rows and talking to us further back.

Eight of the eighteen tracks played come from their recent Dove album, and if you weren't familiar with Belly's work, you might struggle to determine which are which. That said, the energy that they create with the new songs - Army Of Clay, the "hoedown" Artifact, Shiny One and Stars Align - is at least as vibrant and vital as it is when the moshpit starts with seconds of Feed The Tree and Gepetto striking up. And that reflects itself in the audience response as well. With a few exceptions, this is an audience here to not just relive their youth, but to appreciate the wonderful new album that Belly have graced us with. These songs are diverse in their approach, but not in their impact.

The old favourites of course still have their place, King is well represented in the second half as they turn up the guitars for the likes of Red and Superconnected which saw them develop a harder edge to their sound for the second album, partly because of Gail's arrival in the band superceding the recording of most of Star. Slow Dog and Dusted get a familiar euphoric reception and seem to have had to up their game to compete with the young pretenders in the setlist. 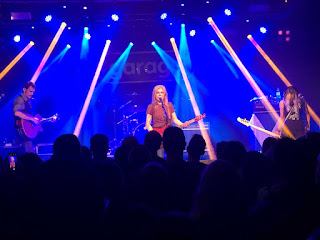 There's no time for a quintessential encore as there is what the Americans call "a hard disco turnover" at the end of the set, so Belly don't leave the stage. Their encore tells us though that everything about this Belly reunion. Rather than save the big hits for the end, the two songs are a beautifully tender, and impeccably observed, Starryeyed, a bonus track on Dove and the fan-favourite b-side Spaceman. As they've demonstrated all night, and more so given this setlist is different to the one in Manchester earlier in the week, this is about the music. Dove is the sound of a band that's rekindled the thrill of those moments where a band first get together and start making music together.

Our review of their Manchester show can be found here.