King Of The Slums - Artgod Dogs 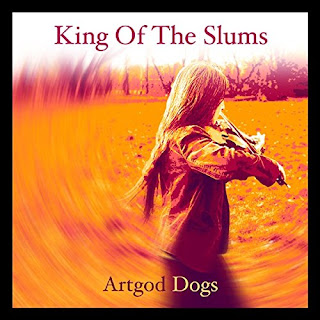 Hailing from mid 80s Hulme in Manchester, King of the Slums have a long and chequered history.  New album Artdog Gods is their sixth studio album. Stuart Ralston has a listen.

They never considered themselves a Manchester band, but then again, who in Manchester did?  King of the Slums  viewed themselves as a band with an arty background, a little self-indulgent with story-type songs. A distorted electric violin was used all the time in early recordings, along with guitar, bass and drums. They continued developing this sound throughout their initial singles and albums. In the early 90s, like so many of their contemporaries, they fell out with record companies, management and each other. However, in 2009 the band embarked on a new album, but everyone fell out again and only developed a handful of new songs. Fast forward to 2016 and the band got back together, releasing a full album Manco Diablo in 2017 which received widespread critical acclaim. Last year saw the inclusion of their track Fanciable Headcase on the newly expanded (legendary) Manchester North Of England compilation box set.

Their sixth studio album Artdog Gods, is regarded by the band as their finest piece of work to date. Notably the new album features the reintroduction of violin and viola. Clocking in at fifty-four minutes, and featuring fourteen tracks, Artdog Gods is a marathon, not a sprint.

Opening track The Broken English is a no hold barred rocker, and features the aforementioned strings from new member Clarissa Trees  to formidable effect. Songs like Cut Throat Living and Che Fatigue have a hard edge – imagine a cross between Dub Sex and The New Fads and you get the idea whilst others like Goya, Pinter, Honey, Bed have a groove. Goya, Pinter, Honey, Bed sounds like Pulp when they were at their best (circa '92/'93). Real, gritty and augmented with some spoken word. Singer Charley Keigher sings in his own distinct northern style, again adding a real gritty feel to the track, which for me is the stand out piece on the album.

Dirty Little Artdog slows the pace down and is much lighter than its predecessors whilst retaining a haunting feel. Pigeon Land also has a slower pace and sounds like a slice of a lost Factory band classic from the 1980s. Crow Syndrome is much more dance orientated with Keigher almost rapping. Summer Scribbler has a real infectious quality to it – driven along by a pounding rhythm section and a simple, repetitive chorus.  Closing with Diamante Swansong, Artdog Gods is an epic record. There's a lot in there to command your attention and it takes several listens to fully immerse yourself in the music.

The band's first live outing since 1991 is scheduled for Manchester’s Night and Day on the 23rd June, in which the band will feature songs encompassing their full recorded history.  It will also feature support from Mark Hoyle's (Dub Sex) SPIRIT:level performance project, nearly 30 years since both King of the Slums and Dub Sex shared billing at The Boardwalk in Manchester for a gig captured and broadcast by the BBC's  (best ever in my opinion) alternative music show SNUB TV. It is anticipated that the live performance will be recorded and visualised resulting in the band's 7th album.

The album can be purchased from their store.