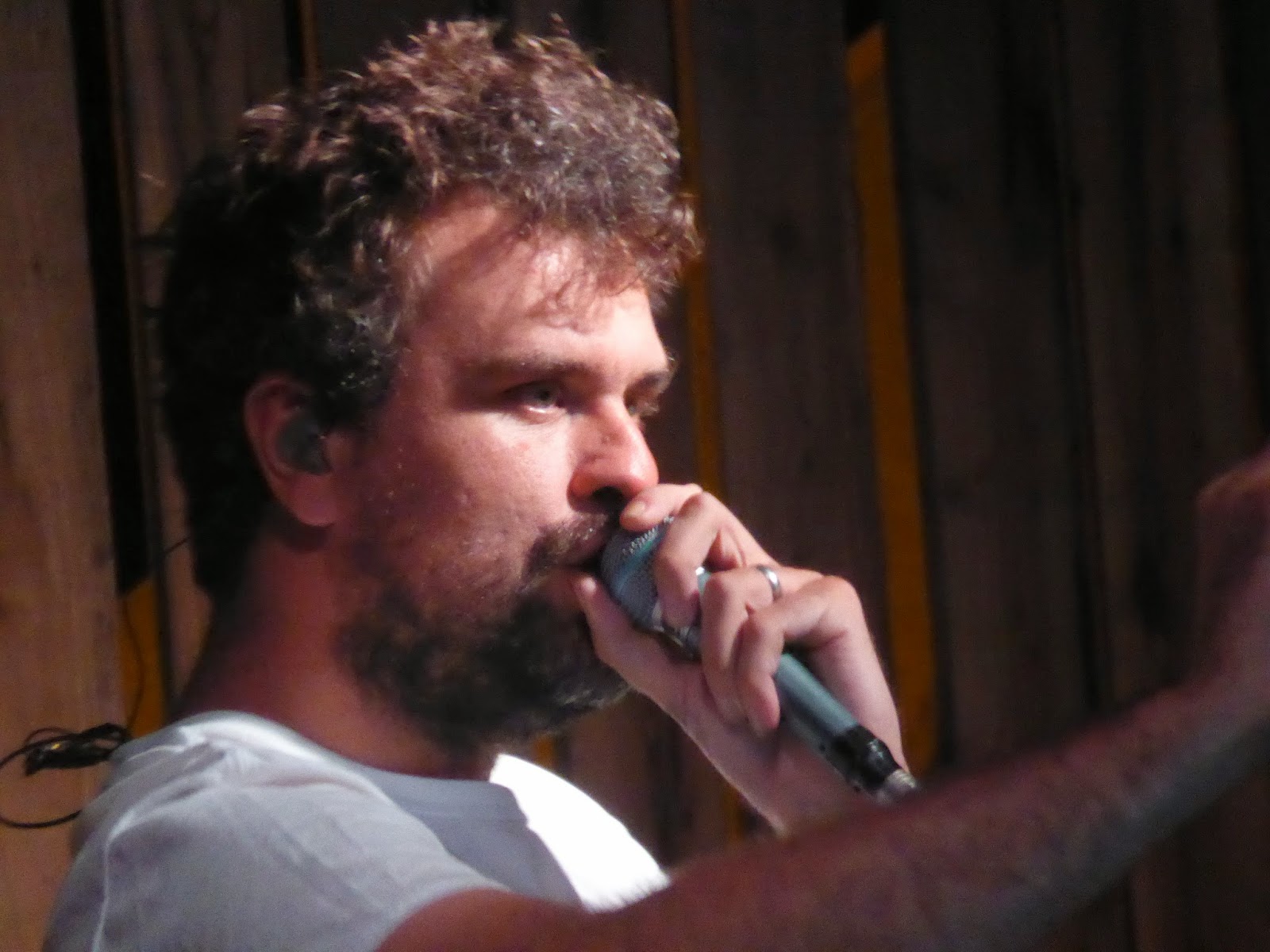 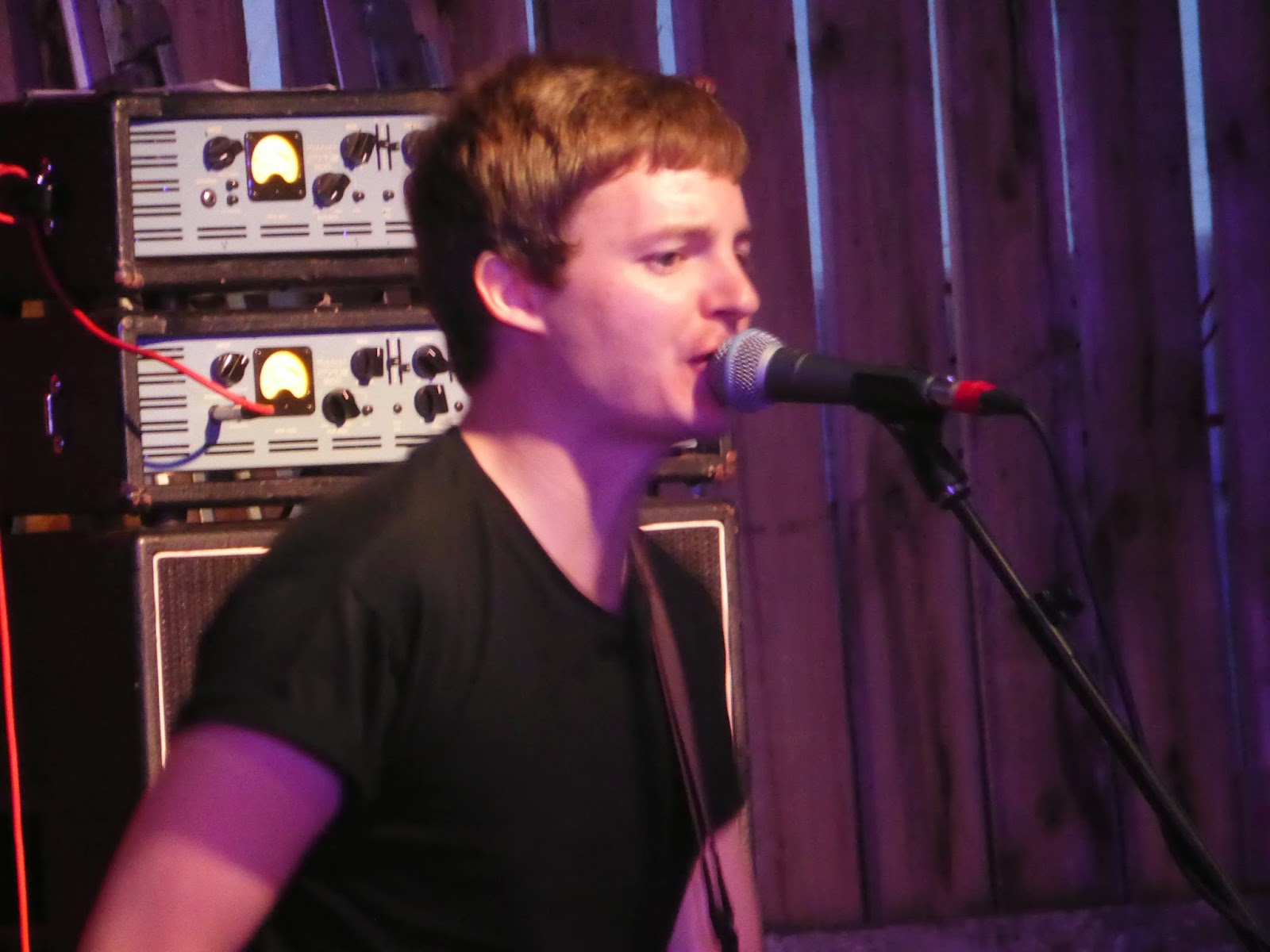 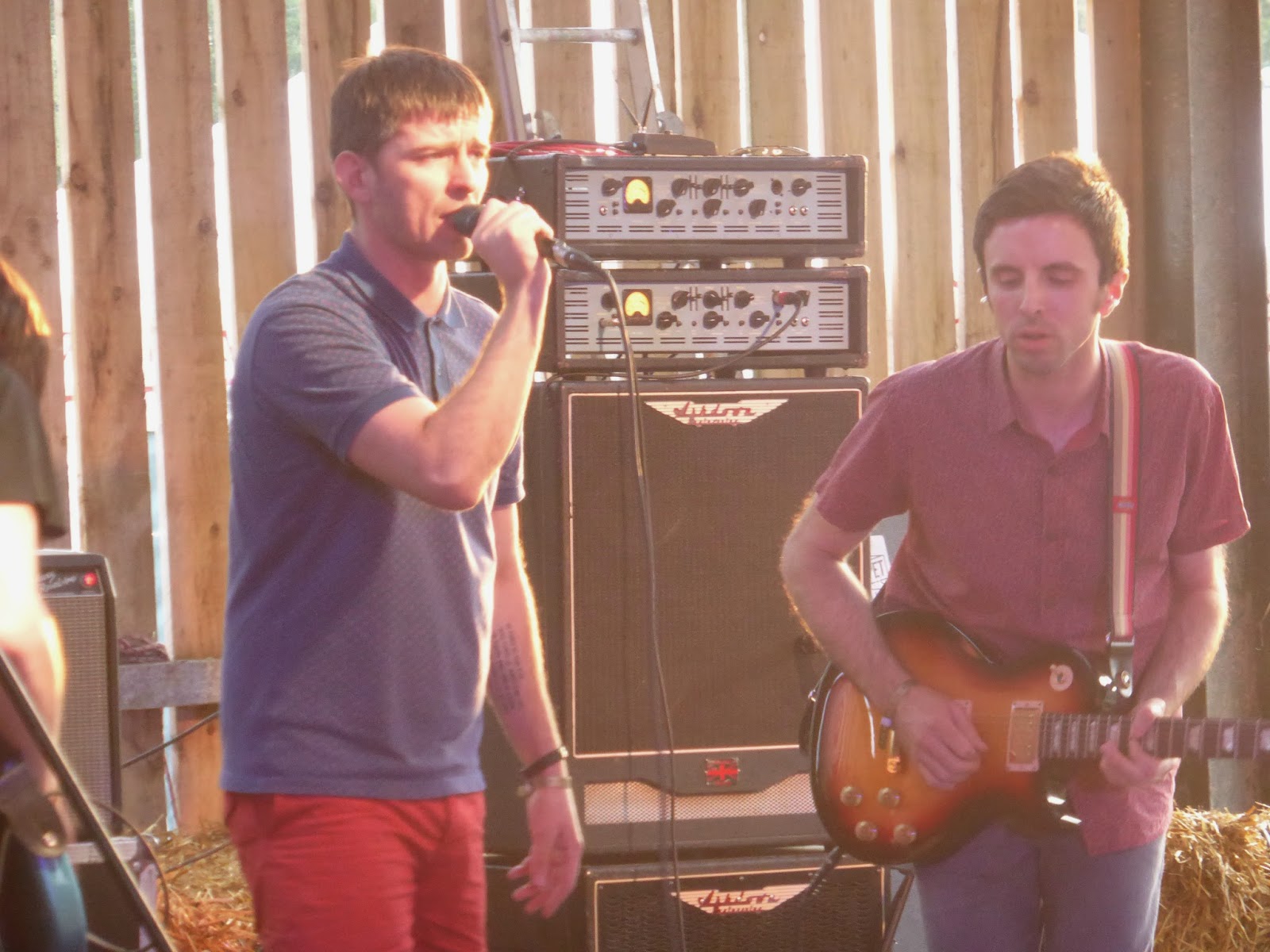 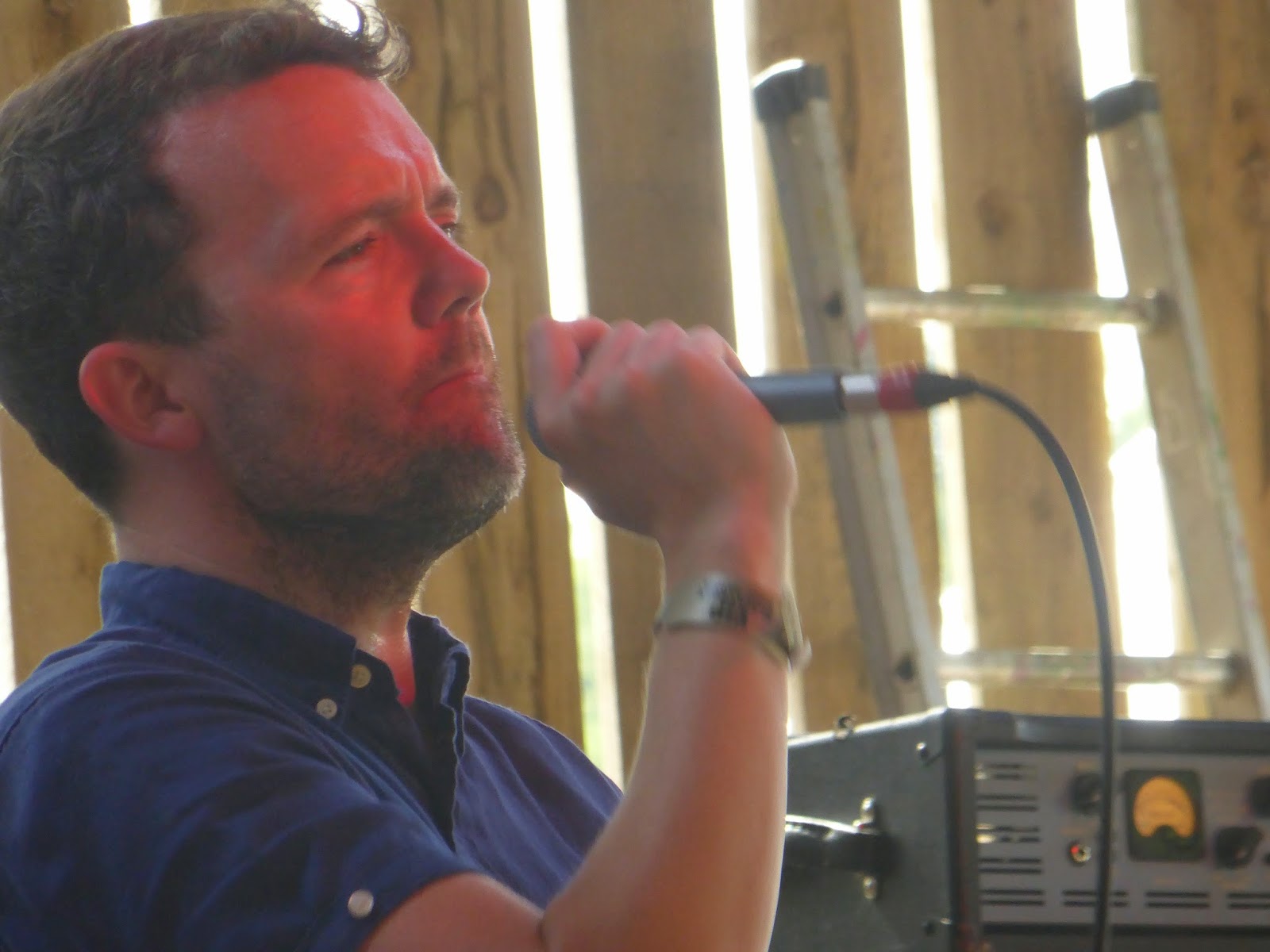 Even The Stars made the short trip from Manchester to the suburbs of Stockport for Blackthorn Festival.  Headlined by Reverend And The Makers, the Saturday night also featured a selection of our favourite local bands in a great setting and a contrast to the big rip-off corporate festivals.

First up for us are The Slow Readers Club.  Quite why they're on at 3.45 is a mystery to us. What's even more mysterious is that set times have been pulled forward from those advertised around the site so we almost miss the start.  We immediately notice they've got a different bassist, but Aaron tells us later that Chris is just a stand-in for the weekend's show so there's no line-up change going forward. 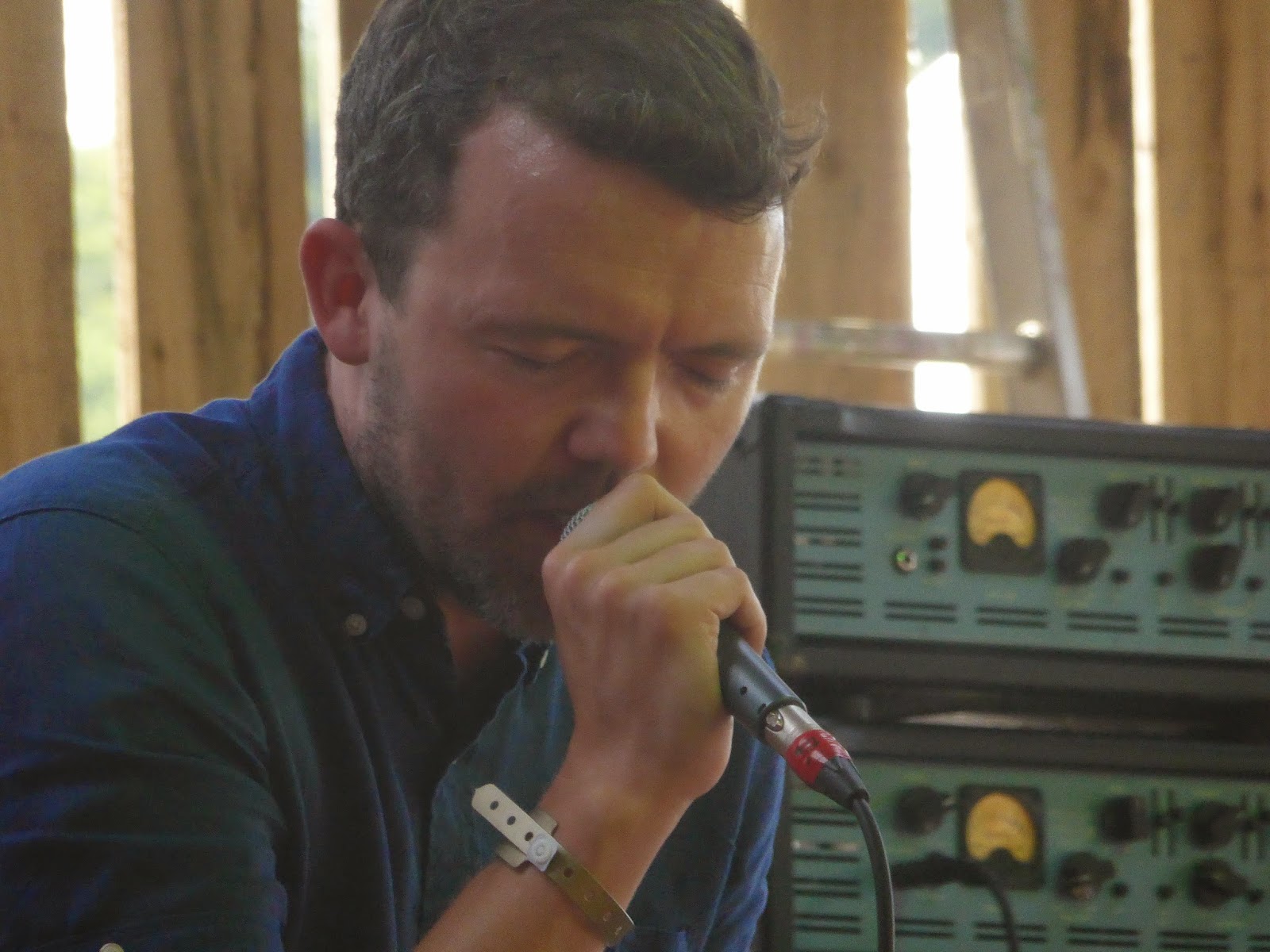 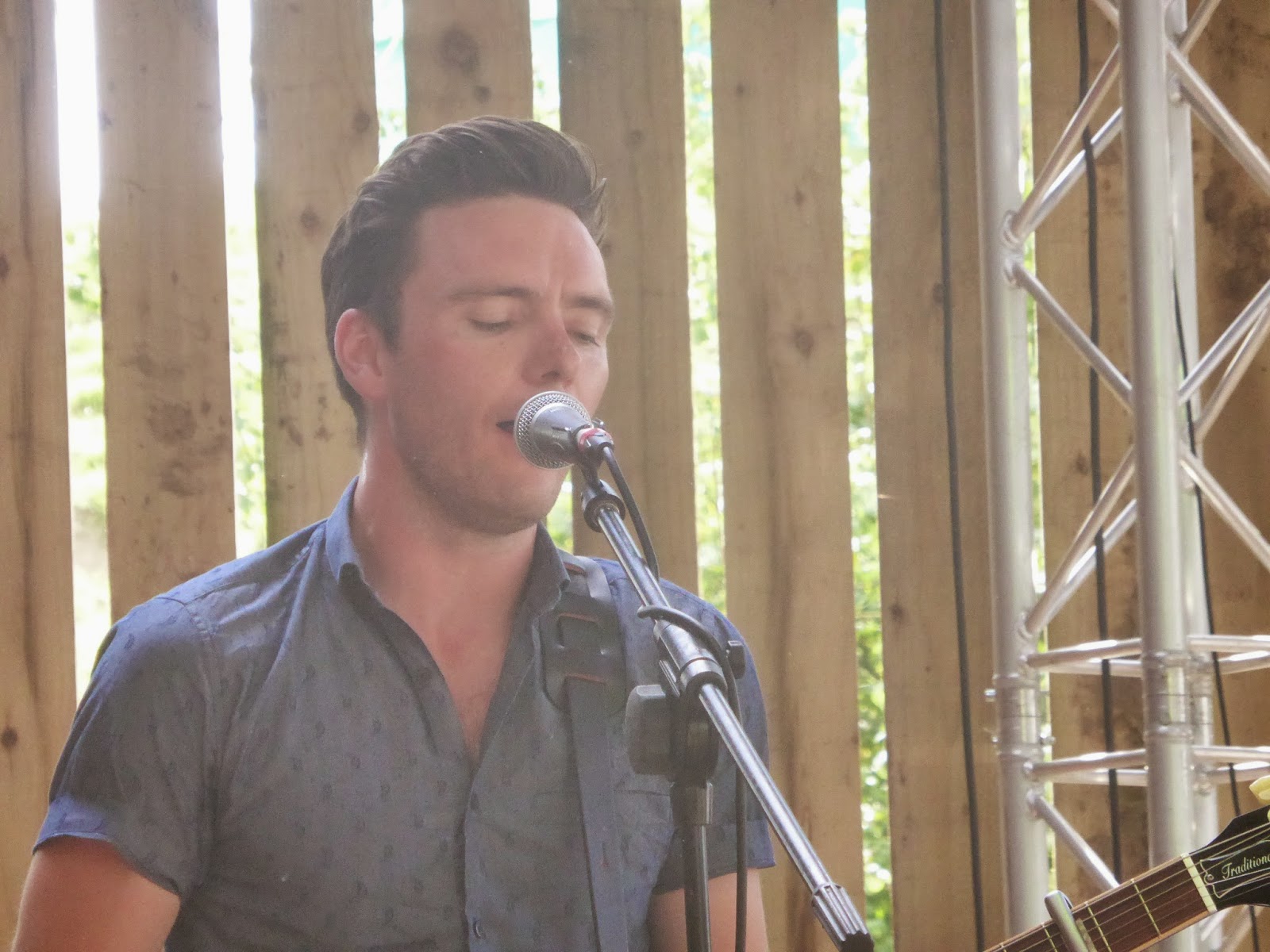 It's great to see them on this bigger stage as their sound fills the barn that's doubling as a main stage for the weekend.  Their sound is perfect for a much wider audience than they're currently attracting and you'd hope it would be just a matter of time before they're picked up.  Whilst they tread that Joy Division / Editors path of gloomy introspective rock, they have enough of their own personality to fend off any copycat accusations.  And when you have songs as strong as Feet On Fire, Sirens and set closer One More Minute from their eponymous debut and six newer songs that should form the basis of album two, including surefire future single Fool For Your Philosophy and their highlight to date Forever In Your Debt, it should really be no contest.

The Slow Readers Club played Sirens, Fool For Your Philosophy, Grace Of God, Days Like This Will Break Your Heart, Don't Mind, Feet On Fire, Forever In Your Debt, Block Out The Sun, Start Again and One More Minute.


The main stage then gets taken up by a number of bands playing a mix of covers and originals that no one seems to have ever have heard of and the tent is pretty much deserted and those still there aren't paying a great deal of attention, which is a shame for the bands as well as the paying punters.  We wander off across the site to the very bijou acoustic tent where we're treated to alcoholic slush puppies and a ten-piece ukulele covers band, apparently called Levenshulme Uke Up, with some interesting takes on Born To Be Wild, Eye Of The Tiger and Teenage Kicks.

Fed and watered, we make our way back into the barn for Puppet Rebellion.   After their sold-out show at the Deaf Institute last month there's a growing buzz about them, but tonight they're beset by sound problems.  Vocalist Simon, not allowed to wear his in-ears, can't hear himself singing and guitarist Craig's monitors aren't working properly.   They make the best of a bad lot though as people scurry around trying to fix things, although it means a number of alterations to their setlist as well as not being able to play certain songs because of time and the need to be able to hear themselves. 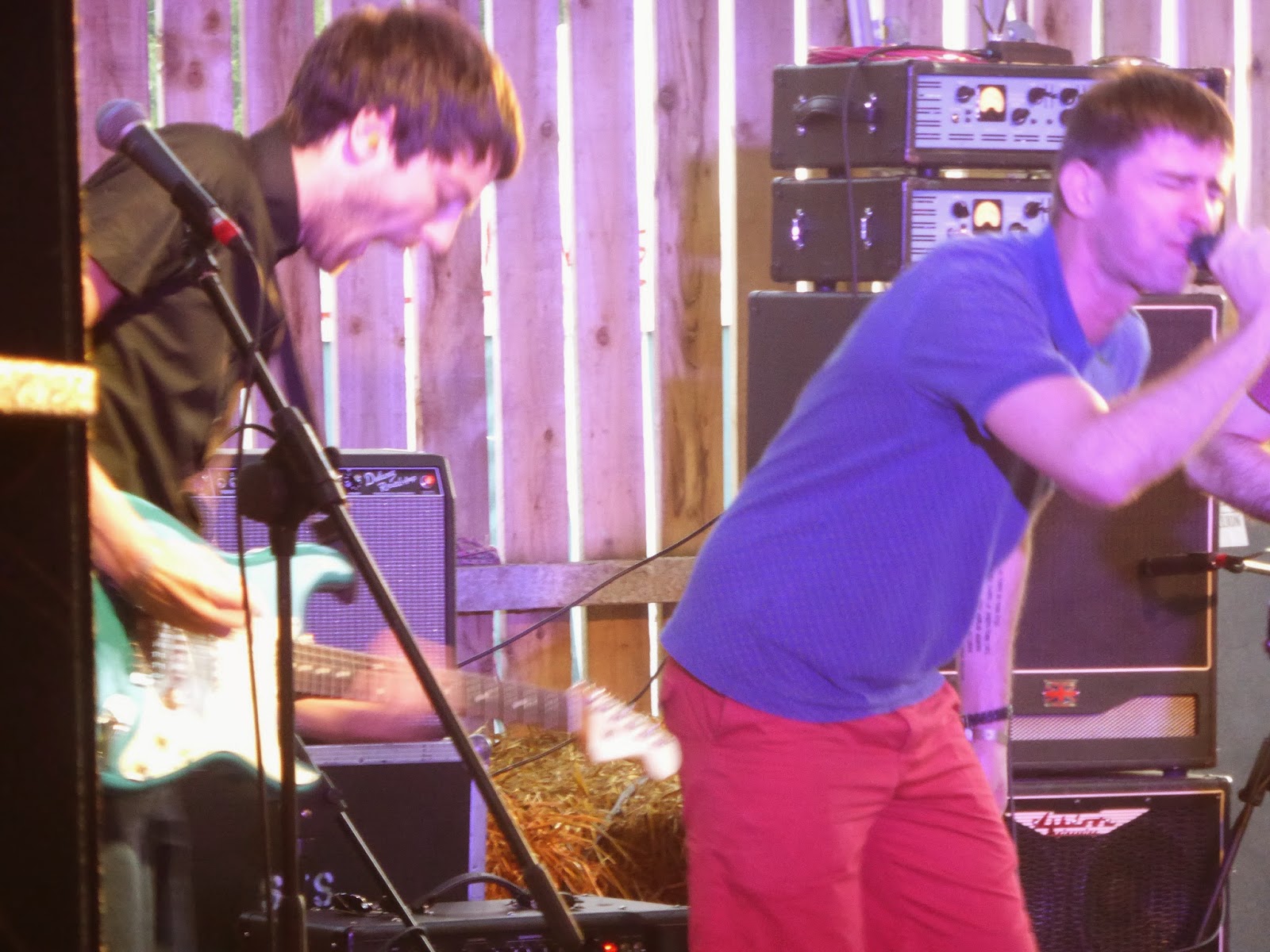 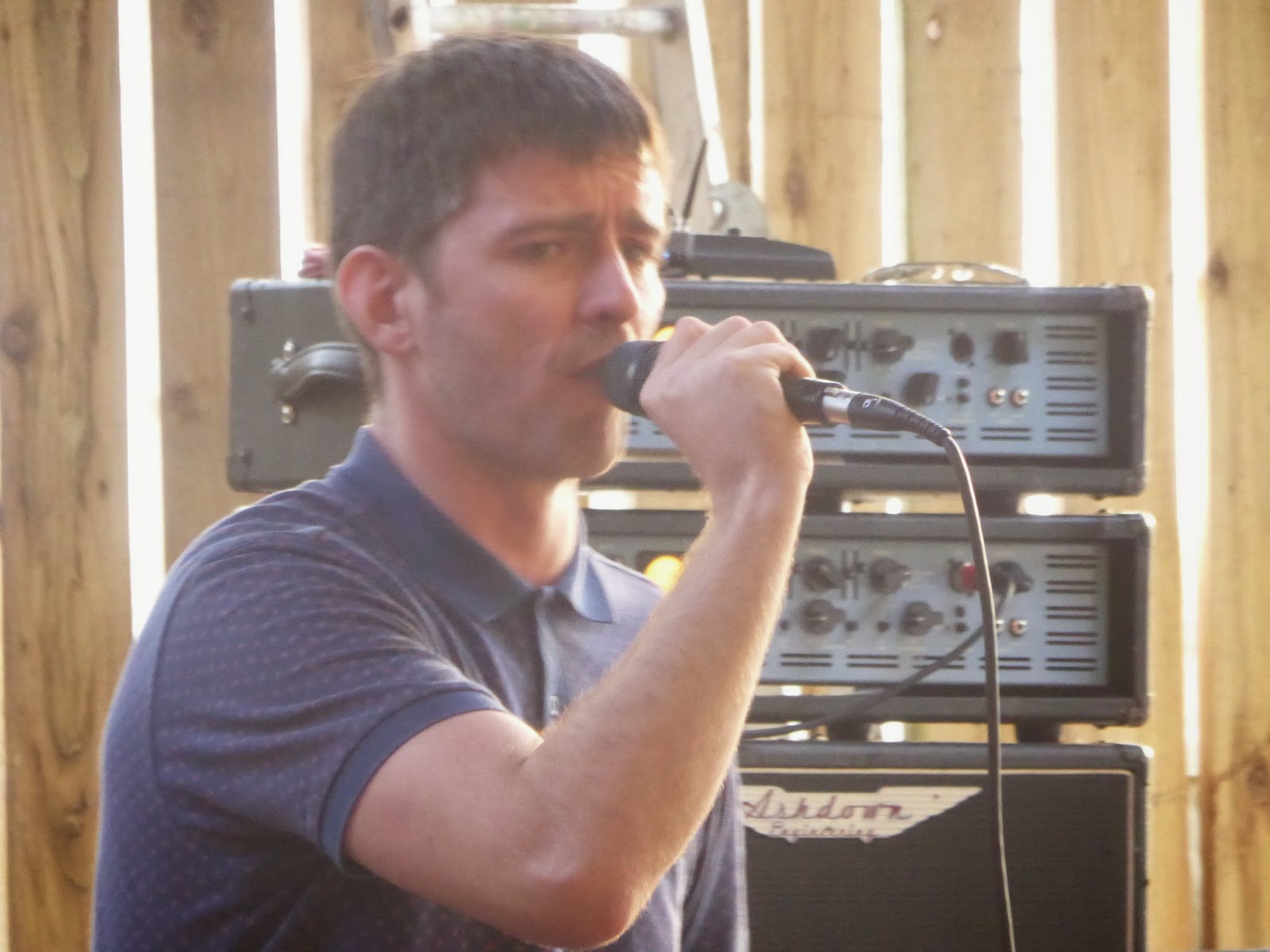 Simon ends up with the crowd for most of the set as it's the only place he can hear his vocals and whilst we (and they) know it wasn't their most successful performance because of the technical problems, our friends who haven't seen them before are still impressed, which is telling to how good a band they are.  Whilst Simon prowls the hay-strewn pit, the rest of the band are as animated as ever, guitarists Paul and Craig making full use of the extra space on stage and jack-in-a-box bassist James joins Danny on the improvised drum riser stuck in the corner of the barn.

They still sound like a band on a mission with something to say.  We get songs from their two EPs to date Chemical Friends and No Means Yes as well as a splattering of new songs they've been putting down in the studio this year.  There's an intensity to Simon's lyrics, a venom directed at ex-girlfriends, ex-bandmates and X-Factor contestants that marks them out, but it's matched by the intensity of the band, close-knit with an almost intuitive chemistry that pulls them through a potentially difficult situation.  They'll have made a bunch of new fans tonight despite everything.

It seems ages since we last saw The Tapestry, but immediately it's like being reacquainted with an old friend.  They've got a new logo resplendent on a banner at the back of the stage and they're being watched by their new youngest fan, guitarist Dyna's daughter and they've pulled a very decent crowd into the barn for their set. 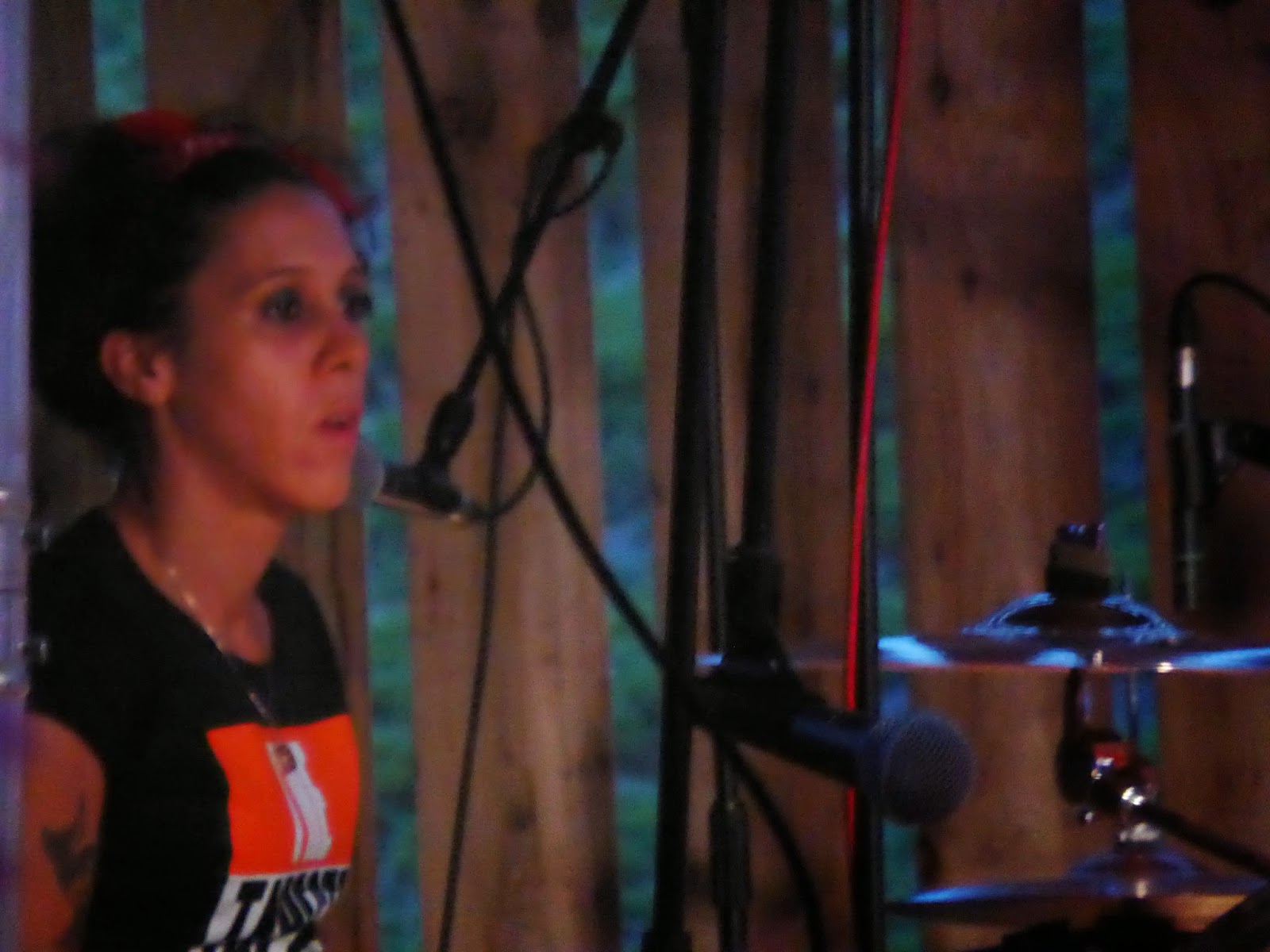 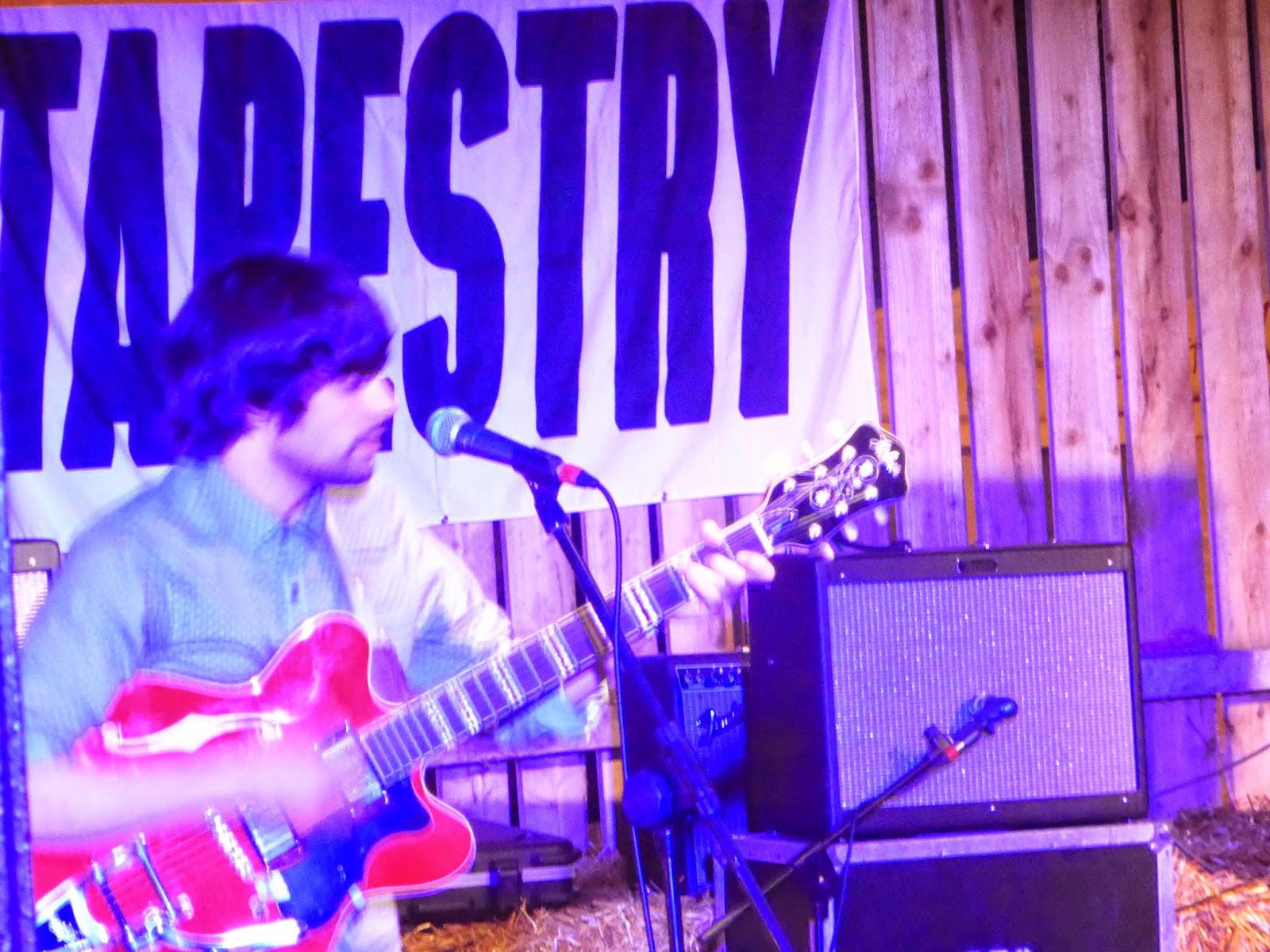 They sound like a band moving forward as well.  We know and love their classics, early singles Take Turns and Rode Your Luck, old favourite My Phoney War as well as Right As Rain from earlier this year but they've introduced a number of new songs into the set in recent times as they build a group of songs ready for their debut album.  Look Out has a catchy chorus where Liam spells out the title and a refrain that sounds like the bastard brother of Duran Duran's Planet Earth. Another new one Infatuation has that Tapestry trademark guitar sprawl but sounds absolutely huge as it builds, ready for their assault on the ears of the nation.

They have the perfect on-stage chemistry for a band.  Liam is a strong confident frontman, Katy is a jack in the box on bass and provides backing vocals that perfectly compliment Liam's lead.  Dyna is the band's maverick, waffling randomly between songs about the next one being by Steps and visually enthralling as he performs gymnastic movements with his guitar and drummer Zara, hidden up in the corner of the barn, being the driving force and the missing link that transformed them from one of a number of might be bands to one of the real genuine contenders coming out of Manchester at the present.

The Tapestry played Beating Heart, Look Out, We Talk, Take Turns, My Phoney War, Infatuation, Right As Rain and Rode Your Luck.

Reverend And The Makers are the perfect headliner for this type of festival.   Whilst the audience might not know many (or any) of the songs, the one thing they're guaranteed to do is get everyone dancing and singing, or, as Jon regularly implores us to do, bouncing.  They fuse the sound of a proper five piece band with guitars, bass, drums and keys to a infectious danceable riffs and beats to create an energy and atmosphere that's it's impossible not to get caught up in the moment they create, and have been creating at festivals of this size all over the summer.  Jon uses tried and tested tricks of getting people to shout where they come from, and as a Yorkshire band, they're outnumbered this side of the Pennines, but he draws it back stating we're all Northern.  He tells us that this is more real than paying six pounds for a pint of piss at Leeds and he's right. In that one line, he underlines why they are the people's band. 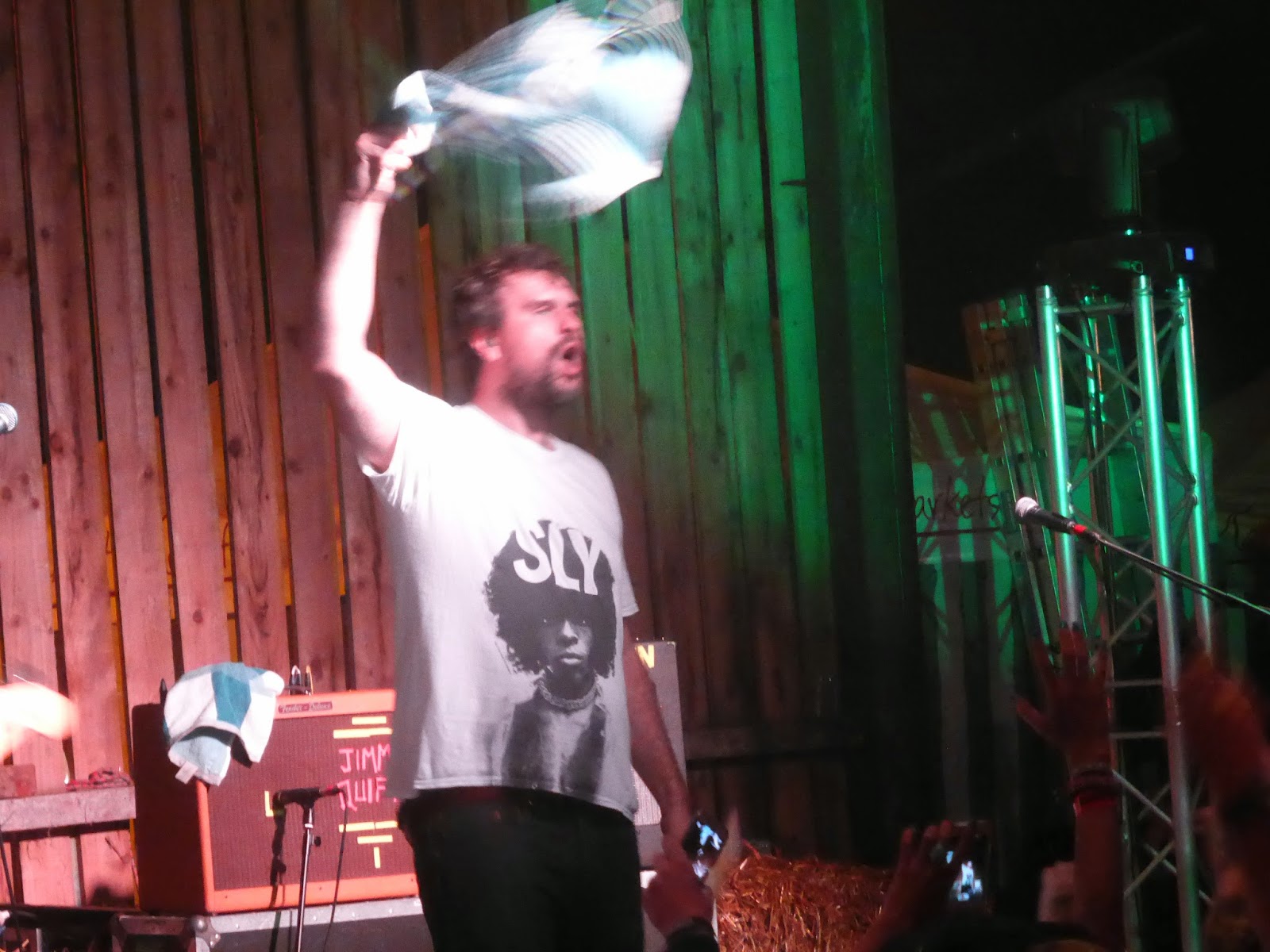 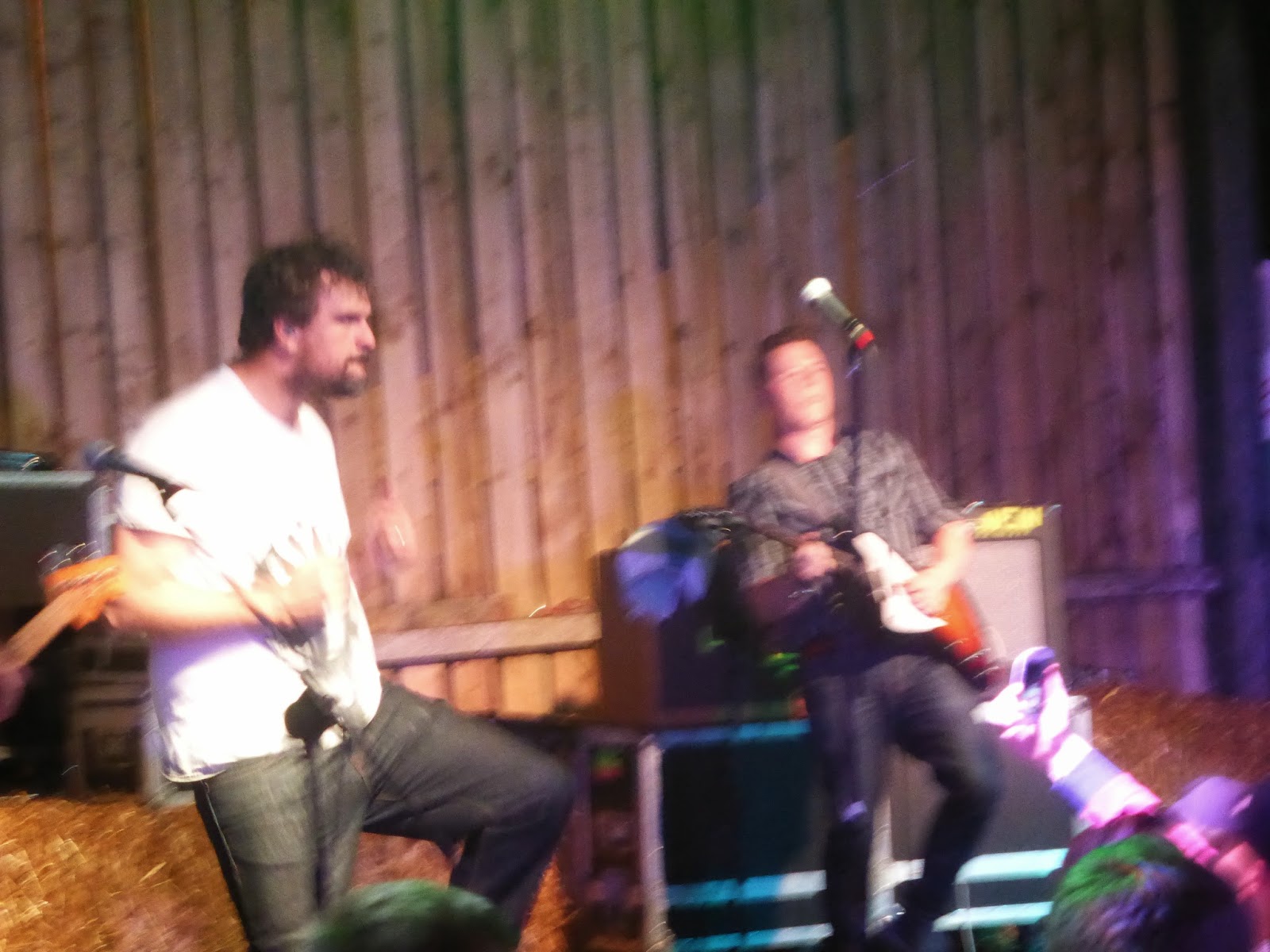 Their set is primarily based around their best two known albums to date, debut The State Of Things and @Reverend_Makers, but the pace doesn't drop off when they play new single Devil's Radio off their Thirty Two album or closing song Silence Is Talking which leaves the crowd heading off into the rain singing along to Laura's trumpet line.  They shake off some sound issues early in the set and the only disappointment is we're restricted to just three quarters of an hour because of a late start.

Reverend And The Makers played Bassline, The State Of Things, Shine A Light, Devil's Radio, Open Your Window, Heavyweight Champion Of The World, I Spy, Out Of The Shadows, He Said He Loved Me and Silence Is Talking

So did we love Blackthorn?  It's a well-run festival in a beautiful setting just outside Manchester with reasonably priced and a good selection of food and drink.  There's little of the idiot element you get at festivals although there's one incident that gets blown up as security let it get past the point of resolution.  We'd have liked a more coherent line-up in the late afternoon and early evening on the main stage despite loving the bands we've reviewed and they need to ensure they work on the sound as it was a problem for a number of bands.  But, all in all, a great little festival, an antidote to the big corporate money making schemes. It supports local talent and the local community and we'd definitely go back next year.

Blackthorn Festival can be found on the festival website.

Email ThisBlogThis!Share to TwitterShare to FacebookShare to Pinterest
Labels: Puppet Rebellion, Reverend And The Makers, The Slow Readers Club, The Tapestry