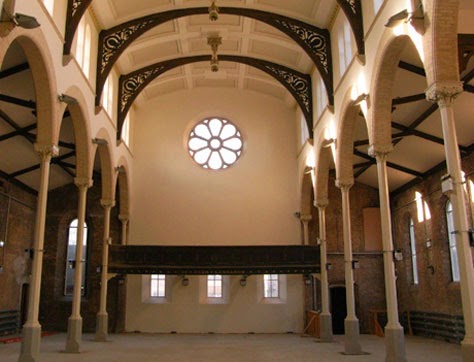 We're a little excited by the announcement from Hey Manchester of a two-day festival at Halle St Peters and St Michael's Church in Ancoats, Manchester as we'll have time to nip home between bands.  The line-up for the event on 16-17 August features The Travelling Band headlining on the Saturday and Jesca Hoop on the Sunday as well as a number of favourites we've written about previously.


Confirmed for the Saturday along with The Travelling Band are Liz Green, Bird to Beast, Seventh House, Olympian, Jake Mattison, Elle Mary and Elizabeth Preston, whilst on the Sunday Josephine, Jo Rose, Race to the Sea, Cavan Moran, Matthew Whitaker and Stefan Melbourne have been announced.

This is the first concert at St Michael's since a recent refurbishment and one of the first at Halle St Peter's since its restoration, it having played host to Cherry Ghost and Peter Hook last winter.   The latter is a stunning building, now used by the Halle for rehearsals and intimate performances.

Tickets for the festival go on sale tomorrow at 10am from Biletto, early bird weekend tickets are a very reasonable £20 plus fees.