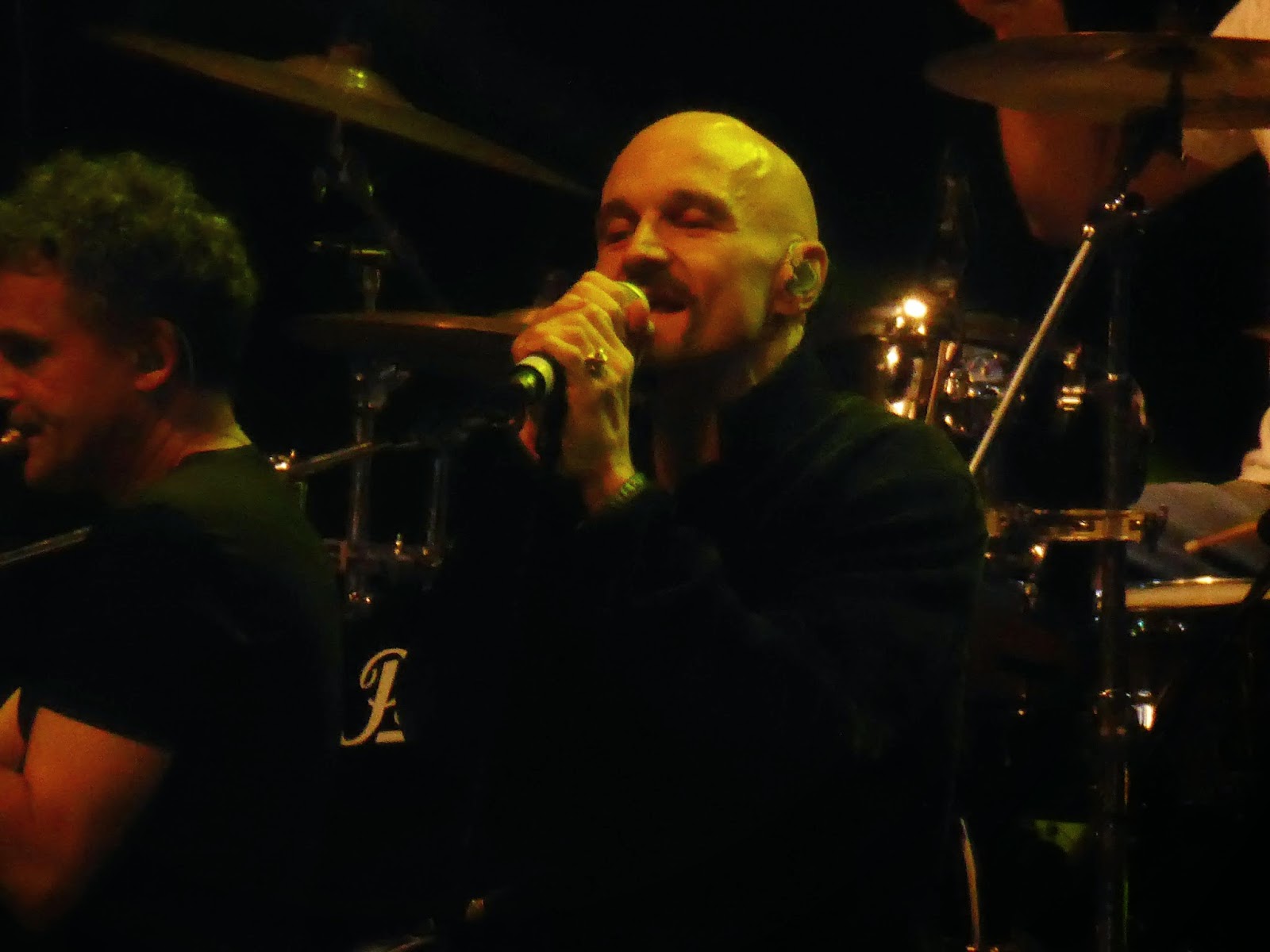 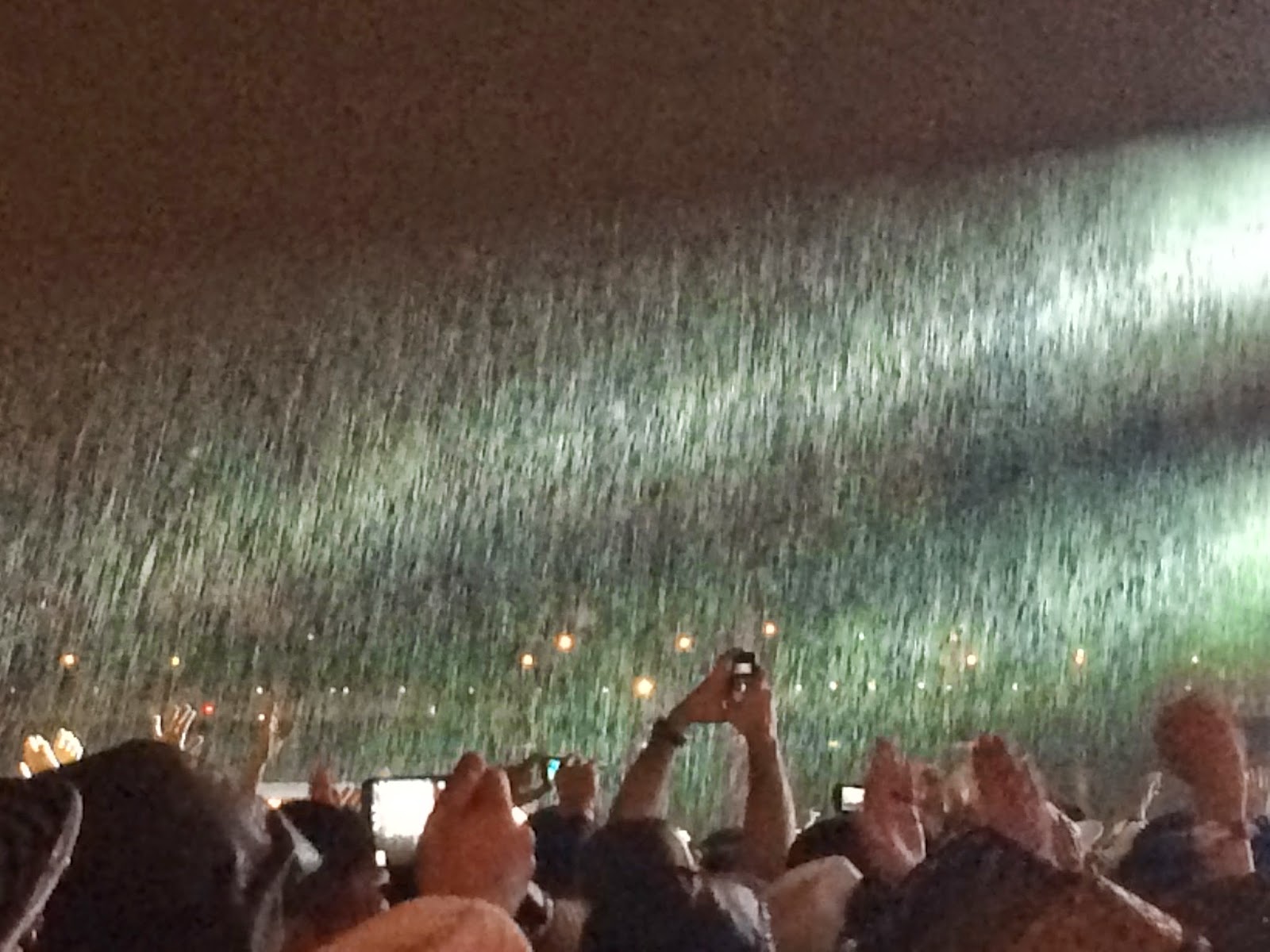 There's a line in Sometimes, James' most famous song in Portugal, that finishes "endless rain, endless rain" and despite that throughout their two hour set, 25,000 James fans sang and danced their way through an exhilarating, if slightly wet, night.

A gig experience in Continental Europe is always an eye-opener.  Mares Vivas is a 25,000 capacity festival and you can imagine the carnage that would bring in the UK - comparing this to last week's hometown outdoor show in Manchester, there's no throwing of bottles of piss, no audience talking loudly over the new (or very old) songs they don't know just listening and none of that underlying threat of violence inside and outside the venue from idiots who can't hold their booze.  It's about the music, pure and simple.

So onto James, despite Tim's throat issues a couple of weeks ago, they now seem to running on full cylinders.  This gig is part of a hectic schedule that sees Manchester, T In The Park, Greece, Benicassim and Latitude in eight days, but it's the sort of thing they thrive on.  They get on a roll and rather than just play on auto-pilot as most bands do when they get tight, they become playful, changing the set around, improvising mid-song and taking them off on previously unexplored tangents in songs, meaning the live experience is never the same twice. 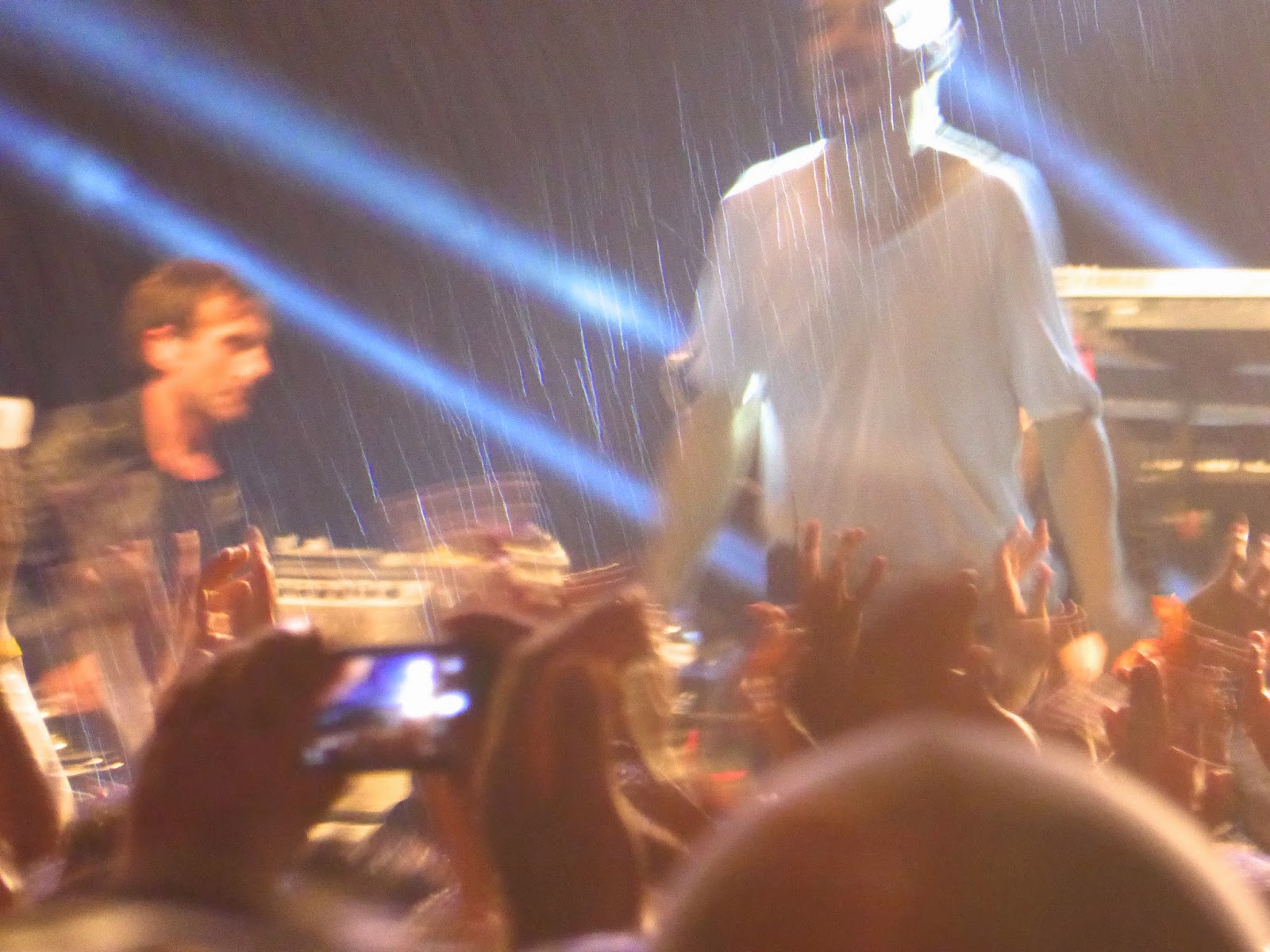 They start the gig with Tim, guitarist Larry and trumpeter Andy walking through the crowd playing an extended (by necessity of the distance) version of Lose Control.   Tonight's set is a perfect mix of the new album La Petite Mort, from which we get five songs, the big hits and a couple of less well-known songs (1985's Hymn From A Village which is now all grown up and as fresh and vital as it's ever been and 1994's Jam J, from their best-kept-secret improvisational album Wah Wah where the strobes light up the rain which is hammering down on the crowd).

The whole show is one huge celebration, a communion of spirits that get the essence of this band. Songs of unity such as Sit Down and Getting Away With It, which during the latter Tim channels his inner dolphin and comes to swim across the front of the drowning crowd.  Moving On and All I'm Saying, about the death of Tim's mum and one of his closest friends, become a celebration rather than a wake, as people clap and sing along. He's almost drowned out by the crowd on Say Something, another song that had a huge impact here.   Sometimes is the biggie though, from the front to the back, arms are raised and everyone, and I mean everyone, is singing along and we take the song back from the band for five minutes at the end.

Despite the delicate nature of some of their songs, you feel James are made for stages like this and, almost more importantly, audiences like this. None of the new material feels out of place either, such is the water level that La Petite Mort has set.

New single, Curse Curse, is having its video filmed here tonight and it's played twice.  The second is a little bit of a luxury that no one minds, even though they're already half an hour over schedule and the rain is hitting biblical ferocity.  Tim ventures out into the crowd in scenes that would go down as legendary if certain artists so beloved of the UK media cabal had done something similar.

Portugal loves James and James certainly love them back, and our group from the UK feel the same about this crowd by the end of the night.  Part of the set ends up on the news of the main TV station here, such is the impact they have and tonight's crowd is a complete mix of age groups, all joined together by the love of the band.  You sort of feel sorry for Skrillex who's due to follow them as pretty much everyone leaves as James finish to escape the rain.   There was no chance of anyone going while the band were on.

Setlist : Lose Control (acoustic), Seven, Come Home, Frozen Britain, Moving On, Hymn From A Village, All I'm Saying, Getting Away With It (All Messed Up), Jam J, Interrogation, Say Something, Tomorrow, Sit Down, Laid, Curse Curse, Sometimes, Curse Curse, Born Of Frustration

James' official website can be found here, where you can download a free version of Interrogation from the album and find details of summer festival shows and a November arena tour.   They are on Facebook and Twitter.   Some of the band - Tim, Larry, Andy  and Dave - are also on Twitter.