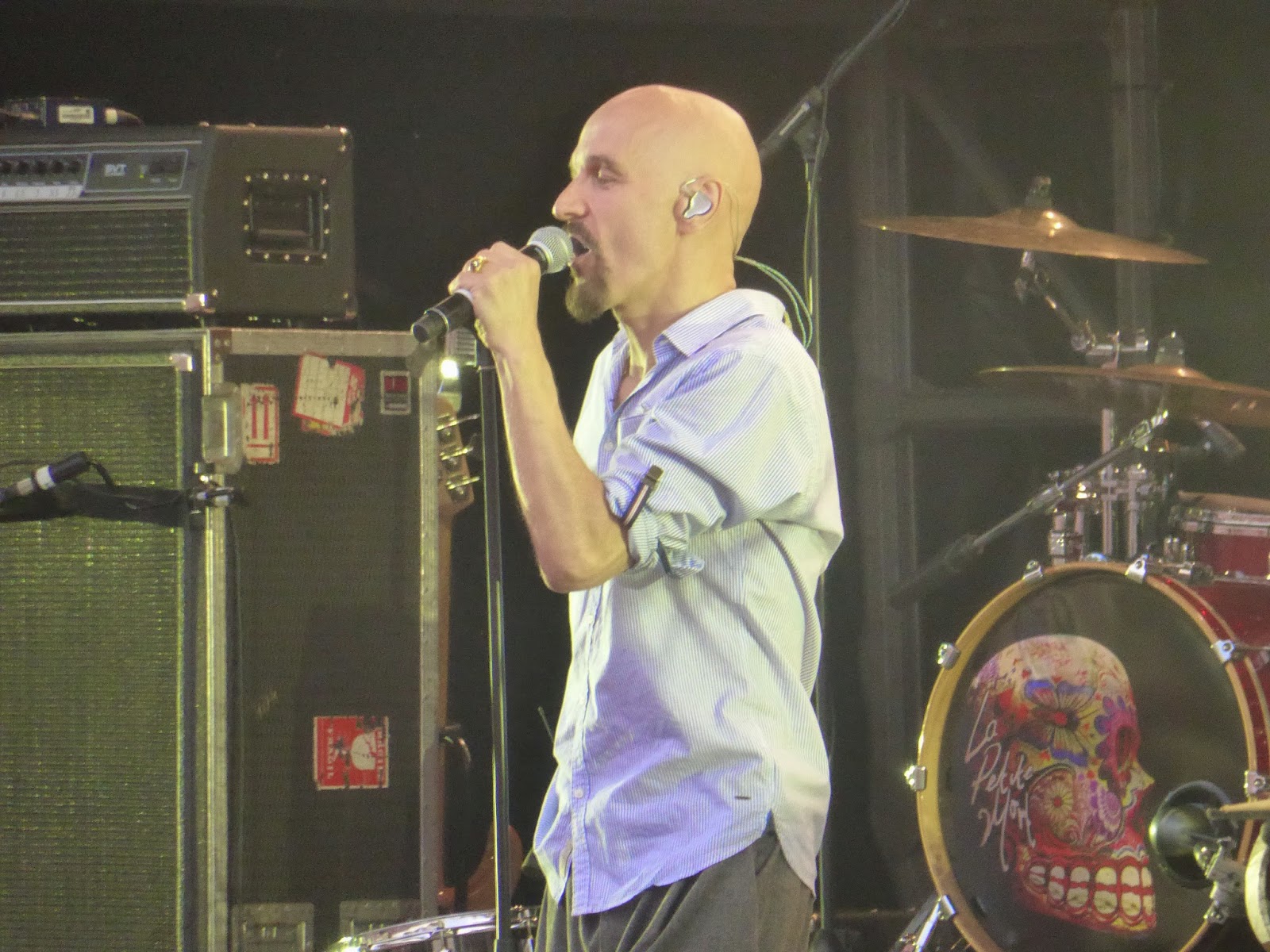 8,000 tickets for this show sold in under half an hour, proof of the pulling power James still have in their hometown.  On a fine summer's evening James delivered a set covering the whole thirty years of their career from early Factory singles to songs from their latest and greatest La Petite Mort.  We were also given a glimpse of Manchester's future with an excellent opening set from Blossoms. 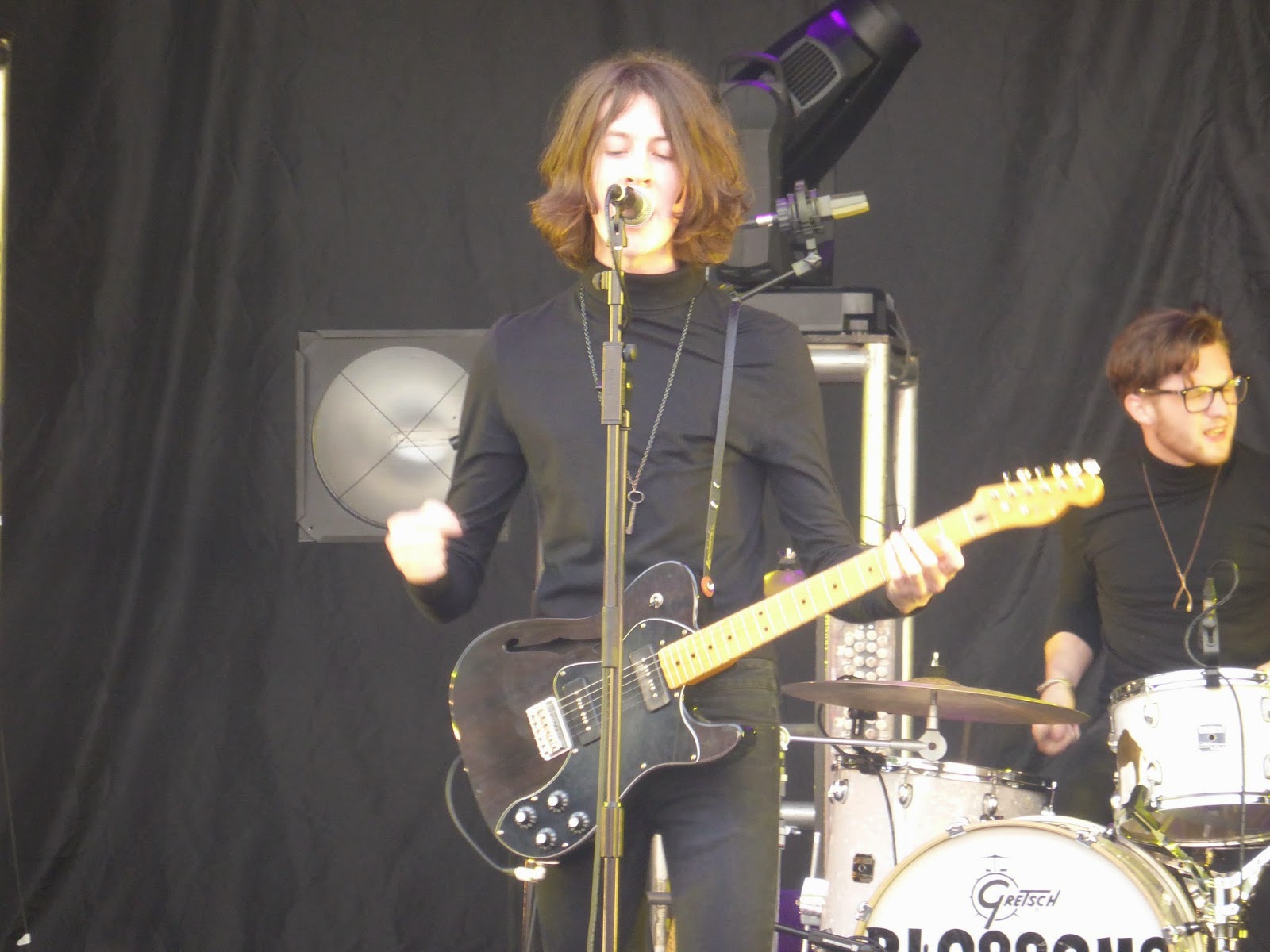 Castlefields is still baking in the unusually warm Manchester early evening sun by the time Blossoms take the stage, all dressed in black and determined to impress their biggest crowd to date.  There's a lot of bands doing the "psyche" scene at the moment, and whilst there's some great bands on the darker fringes of it, there's none doing the lighter shade better than Blossoms.  They deliver a set of songs perfect for the setting and the weather - tracks like Urge and Madeleine as well as You Pulled A Gun On Me - show that they're set for much bigger and better things.  Vocalist Tom Ogden already has the voice and the confidence on stage and they're an incredibly tight outfit for a band so early in their career.  Remember the name. 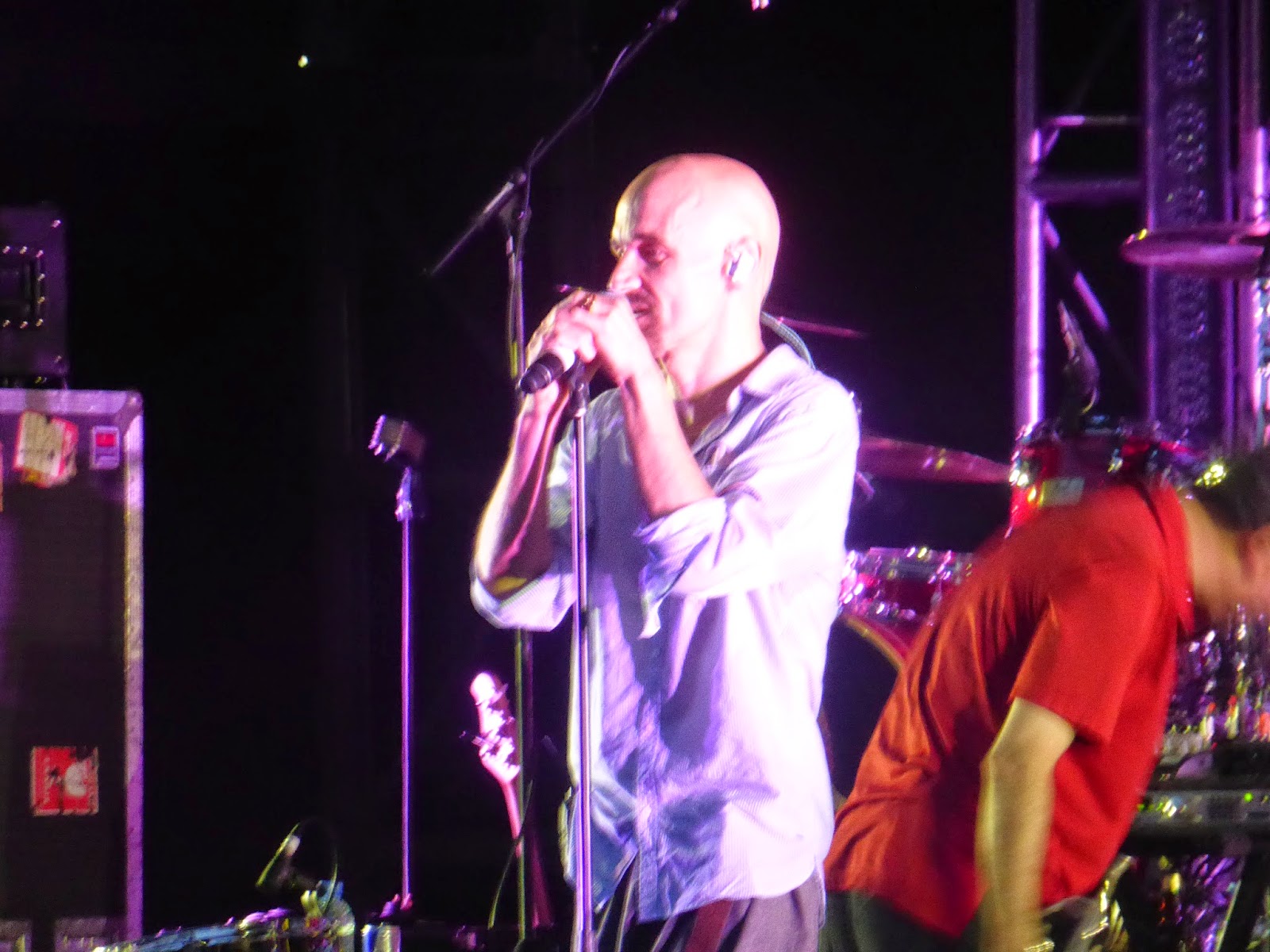 You'd forgive James for coming out and playing a crowd pleasing hits set tonight - an alcohol fuelled crowd (less said the better of the pricks near us in shorts, white plimsolls and shades who decided that not listening to the band and pissing on the floor was a good idea), a celebratory atmosphere and issues with Tim's voice that saw the cancellation of the warm-up gig in Oxford the previous night.

It's James though.  They start off slowly with Out To Get You, current single Moving On and a surprise resurrection of Seven album track Heavens.  Unusually for this type of event, the sound is pretty decent and there's no sign of the issues that caused concerns about whether the show would go ahead.  Tim goes down onto the barrier for Heavens and almost gets dragged into the crowd. 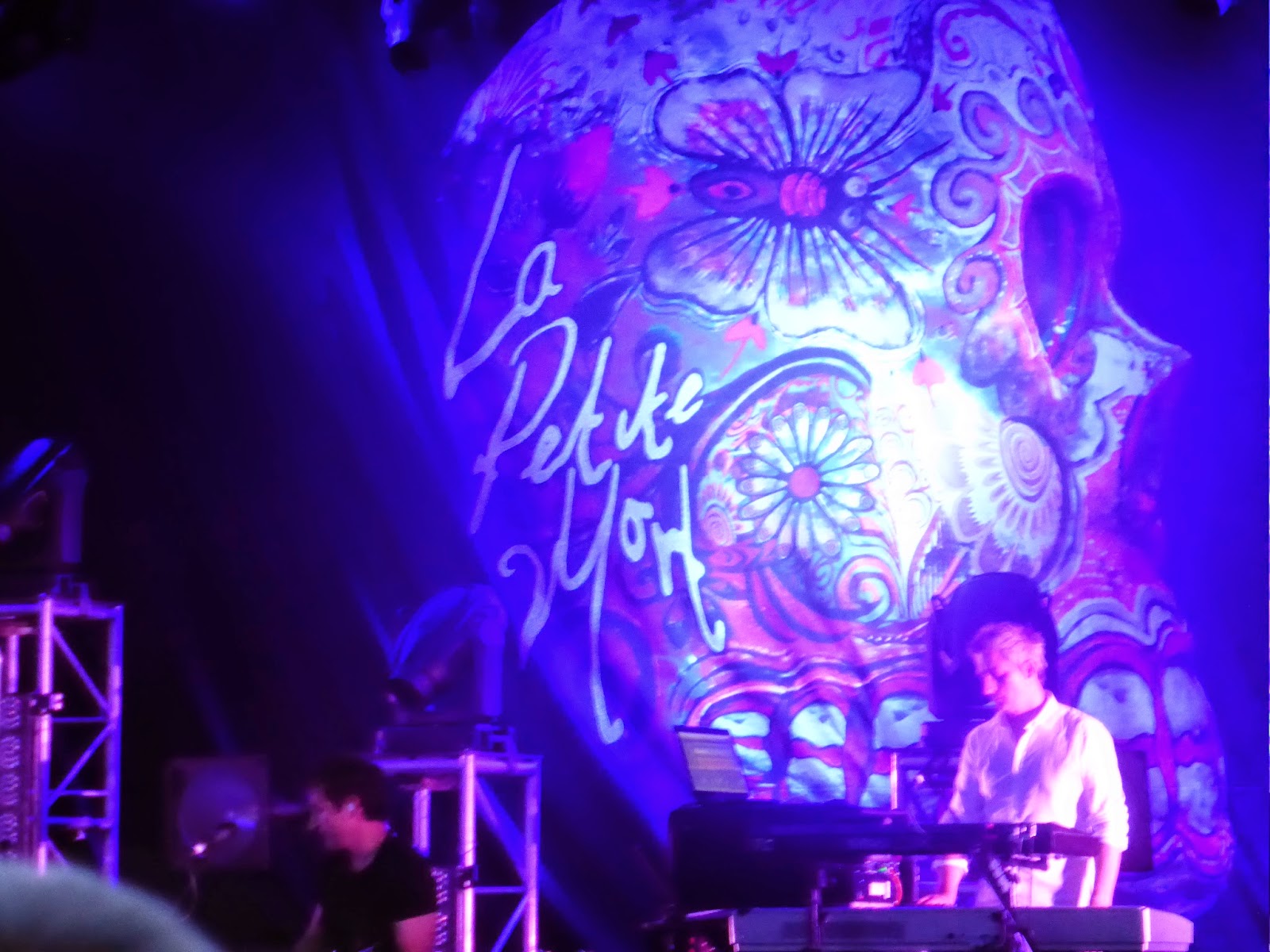 The crowd raise their arms en masse as the intro to Ring The Bells kicks in, singing along every word in one great big Mancunian communion.   Walk Like You ends in a typical Jamesian jam, on the verge of breakdown, chaotic and utterly thrilling, not just repeating the album note for note like so many bands do.

We're then treated to a blast from the past.  Two songs, both Factory singles, older than quite a bit of the crowd and the support band - What's The World and Hymn From A Village - given a new lease of life, as fresh and vital as they were back then and a curveball move in an environment where the crowd are gasping for hits.  Bitter Virtue, the one real curio on La Petite Mort, is another brave, but typical James choice.  Over the chatter, it works surprising well in this environment.

Say Something gets an ecstatic reaction, people shut up and sing along. It's one of those classic James singles, not their strongest song but one that unites a crowd and speaks to everyone.  The backend of the set is choc full of these songs of unity - Sometimes, Getting Away With It, Come Home, Tomorrow, even Sound - that explain the lasting legacy of James and their ability to play this size of venue and sell tickets at a rate that the music press and media ignore because it suits their agendas.

We also get first single of La Petite Mort, Frozen Britain, a magnificently ramshackle romp of a song as well as album closer All I'm Saying (the setlist had Sit Down as an alternative in case Tim's voice couldn't get the higher notes, but there's no such issue).  An incredibly personal song about the death of a close friend, it's transformed into a musical celebration of her life and Tim's relationship with her, but it could apply to each and every one of us.

Sometimes ends in a wonderful communal singalong, when the crowd just pick the song up and run with it.  It's magical when it works like that, generations of fans as one and it's picked up again later between the main set and first encore and to get them back for the second encore. 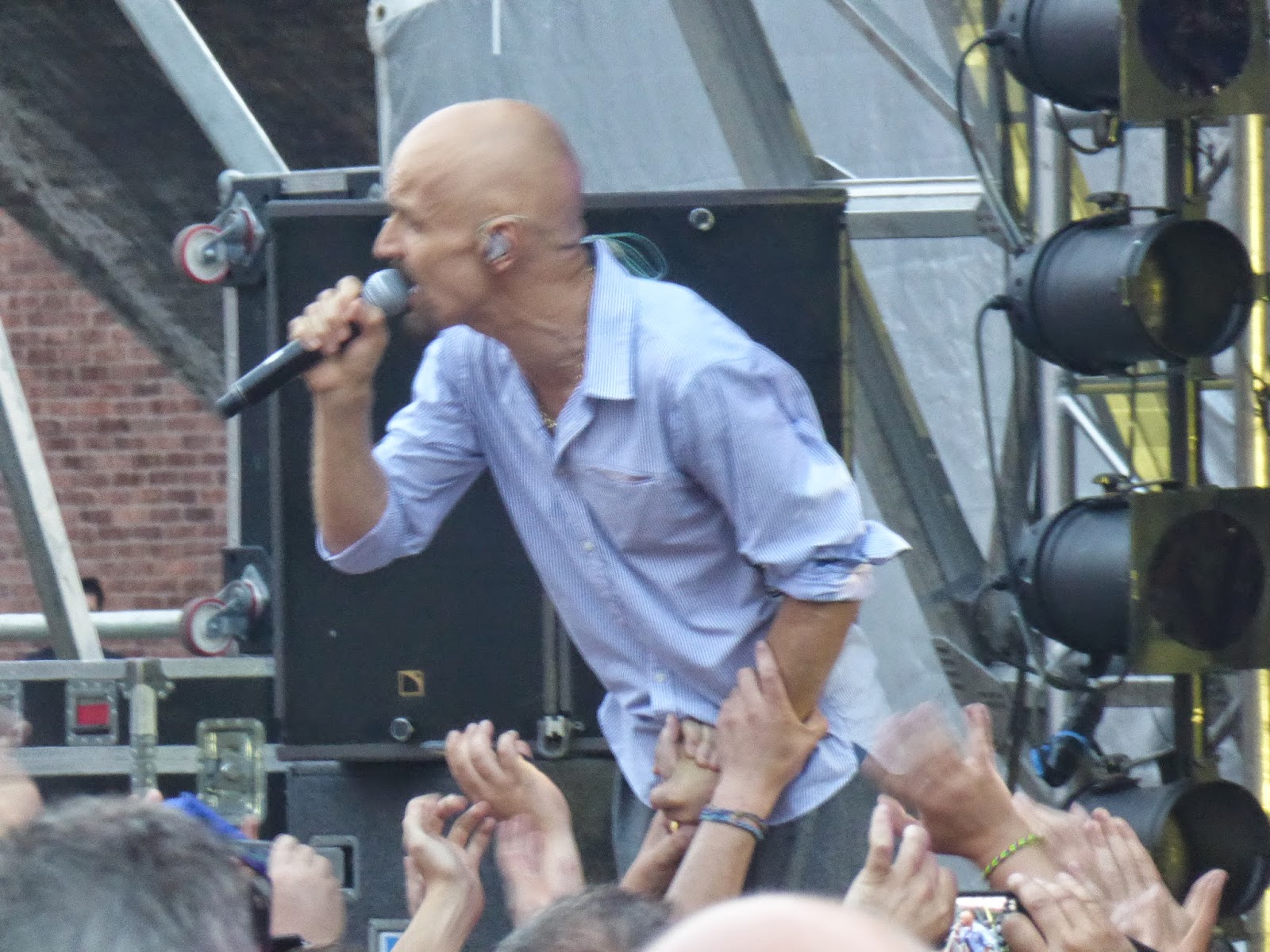 Curse Curse is hopefully the next single and is an absolute monster of a song. Driven along by a rampant dance undercurrent, it references Lionel Messi, voyeuristic sex in the next hotel room and tequila.  Typical James in the sense it's actually quite atypical of them.

After a frantic, bonkers Laid, the crowd refuse to go home, calling the band back one more time.  Instead of the obvious, we get Johnny Yen, first released back in 1986, a lasting James anthem that has survived line up changes and keeps being revamped, reinvented and engrained in the hearts of the faithful.  It's a fittingly awkward close to events.

James played Out To Get You, Moving On, Heavens, Ring The Bells, Walk Like You, What's The World, Hymn From A Village, Jam J, Bitter Virtue, Say Something, Frozen Britain, All I'm Saying, Getting Away With It (All Messed Up), Sometimes and Sound with a first encore of Curse Curse, Come Home, Tomorrow and Laid and a second encore of Johnny Yen.

James' official website can be found here, where you can download a free version of Interrogation from the album and find details of summer festival shows and a November arena tour.   They are on Facebook and Twitter.   Some of the band - Tim, Larry, Andy  and Dave - are also on Twitter.