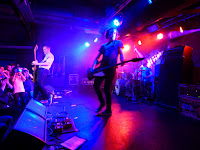 Armed with a new album Kablammo released a couple of weeks ago, Ash came to Manchester to play a sold-out show at the sauna-like Sound Control that mixed tracks from it and classics from their mountain of celebratory punk-driven three minute hit singles.

It's nineteen years to the day since we saw Ash play a similar summer show at the Underground in Cologne shortly after the release of their debut album 1977. Like tonight, you were hit by a blast furnace of heat the minute you entered the room.  Whilst their crowd may not have aged as gracefully in the interim, the core three of Ash - Tim Wheeler, Mark Hamilton and Rick McMurray - show few signs of having lost any of that raw energy that made them such a phenomenal live act back then.

The Kablammo tracks that they play as well might not have quite the radio-friendly edge of the likes of Kung Fu and Burn Baby Burn, but they've not lost any of that spirit that catapulted Ash songs forwards at breakneck speed, whether it be the two-minute instrumental blast Evel Knievel that opens the night or the album opener Cocoon that follows it. Mark loses himself like a man possessed from the start, drummer Rick (on his birthday) creates a whirlwind on drums that propels everything around it, leaving Tim to belt his way through twenty-plus songs in an hour and three quarters. We're amazed they don't melt in the process as the audience is on the verge throughout. 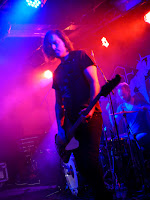 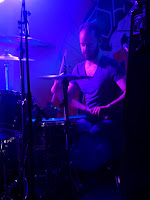 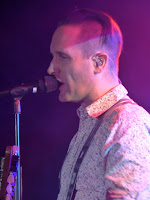 What Ash did so perfectly when they were the darlings of the media in that period around the second half of the 1990s was to create a sound that was unmistakably them, but which also wasn't just an ever-decreasing rehash of their first hit single that sank so many Britpop counterparts. They haven't lost that knack either - tonight's set is as fresh, vibrant and, most importantly, fun as any of the double-digit times we saw them in those heady days. They cleverly mix the set to accentuate that impact too - new generally rubbing shoulders with old and not paling in comparison.

It's the only the audience response to their best-known singles that would allow an unknowing observer to identify the new songs from old, hit singles from new album tracks. Go! Fight! Win! has all those qualities that makes it difficult to not fall for their forthright straight-forward assault on your senses - crashing drums, a riff that'll be ringing round your head for days, a big banging breakdown section and a chorus that everyone can sing / shout along to. They also show with the likes of Free and the anthemic Moondust that they aren't just hit and run merchants, but it feels throughout that the new songs have been written to be performed live, going back to their roots and the principles that stood them in such good stead at the start of the band's life.

By playing an hour and three quarters Ash allows themselves to both promote Kablammo and remind us of just how significant that back catalogue of hits is too. 1977 itself spawned five hit singles that are all present and correct here and the likes of Goldfinger and the dreamy teen romanticism of Oh Yeah prompt singalongs that almost drown Tim as well as showing that behind that hedonistic punk-driven power pop there's also an underpinning sense of melody and a connaissance of the impact of an unexpected chord change. Kung Fu is a perfect reminder why they were such a breath of fresh air when they broke - two and a half minutes of breathless headrush that sounds as vital and dynamic today as it did when it came out. 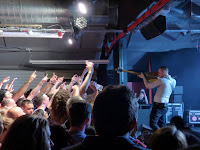 Their other commercial highpoint, Free All Angels, is also well-represented too, the inevitable encore-closer Burn Baby Burn, Walking Barefoot and Shining Light occupying heavyweight spots towards the end of the set, but they also mix in the likes of Arcadia and The Return Of The White Rabbit from their mammoth A-Z series of 7" releases as well as non-album singles Jack Names The Planets and A Life Less Ordinary and a nod to their Northern Ireland roots with a cover of The Undertones' Teenage Kicks. All in all it stacks up to a magnificently impressive back catalogue to which Kablammo is a fine addition.

There's a great camaraderie on stage and between band and audience, a genuine connection, and this is no more evident when one of them is invited on stage mid-set to propose to his girlfriend - who fortunately says yes. Girl From Mars is started with the audience singing the first verse unprompted. The new songs get given the respect they deserve as well, which isn't always the case with a band that has a history like Ash's - rightfully so as it's a record that stands up to its predecessors.

By the time the evening reaches its conclusion, we're on the point of heat exhaustion, but euphoric at the celebration we've just witnessed of a band that isn't just rolling back the years but recording and performing with all the excitement, energy and love that they did almost two decades ago. They're still a force to be reckoned with.

Ash's official website can be found here - they plan to tour again later in the year although dates have not yet been announced.