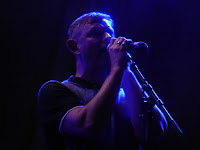 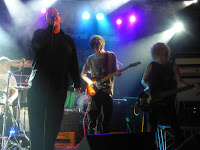 Ahead of their headlining slot at York's Apollo Festival, Inspiral Carpets returned to one of their (and our) favourite venues - the beautiful Holmfirth Picturedrome set up in Last Of The Summer Wine country in the Pennines. They play a set of old and new favourites to a boisterous crowd supported by fellow Mancunians Dub Sex.

Dub Sex are, using what has become a common phrase these days, a Marmite band. Mark Hoyle's third-sung, third-spoken third-shouted vocals layered with reverb and an echo might be too much for some, but they have never been about mass appeal or trying to be cool. Reforming the band could never be about the money, but for a love of music. People don't just like Dub Sex, they love them and it's not hard to see why when you dig further and listen to them closer. 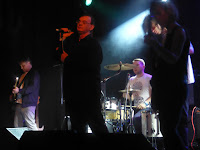 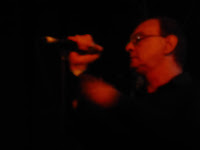 Take opening song Push for example, it's driven along by a repetitive drum pattern that drills its way into your ears and sets up base camp for the duration. Around it dance dark sparse tense metallic rhythms which feel continually on the cusp of breakdown as Cathy Brooks' bass as well as Stefan Hoyle and Chris Bridgett's guitars weave patterns that feel both hooked into the spirit of their home town in the 1980s, but which yet still feel relevant today as they eschew the conventions that so many bands adhere to these days. Penultimate track The Underneath is another case in point - at moments like this they feel unique, a band ploughing its own furrow regardless.

The magnificent epic brooding Swerve, the quick-fire punk staccato waltz of set-closer Tripwire and Man On The Inside show a diversity to their sound as well. Although Mark's vocals remain inimitable throughout, he changes the pace and pitch of his delivery subtly to align with the sonic patterns his bandmates are creating and to keep the listener atuned to them. Dub Sex are an acquired taste and certainly not to everyone's it has to be said, but once you've taken the first bite, they'll keep you coming back for more. 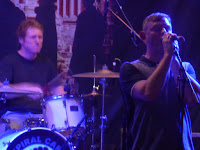 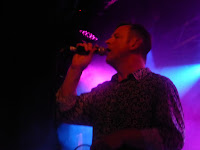 2015 looks to be a quiet year for Inspiral Carpets as they consolidate following last year's self-titled comeback album with only a few festival appearances in the summer before a tour with Shed Seven at the back end of the year. They continue their fine tradition of warming up for festival shows with intimate gigs at places like the magnificent Picturedrome which has filled up and there's an expectant buzz as they come on stage and strike into Joe, an early single prior to their debut album Life, but a staple crowd favourite. It's the Inspirals in a nutshell, fast, addictive garage music that flirts with pop music due to a natural instinct for a melody, a hook, a lyric or a combination of the above that speaks to their crowd which is a mix of the greying who witnessed them first time round as well as an encouraging amount of younger fans who are getting to know and love them. 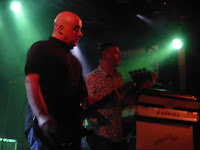 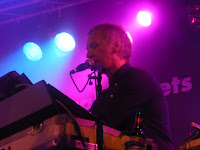 The set likewise mixes the old and new. The five songs from last year's album fit in seamlessly with everything else around it and you'd be hard-picked to call them as being written at least two decades after the rest of the set. As lead single You're So Good For Me moves into their debut Keep The Circle Around, it feels like you've entered into some kind of weird psychedelic timewarp where everything around it has changed but Inspiral Carpets are a constant. It's not just Clint Boon's unmistakable keyboards either. Craig Gill's drum patterns sound so simple that they belie their complexity - the African rhythms at the end of She Comes In The Fall as exhibit A - and how they dictate the pace of so much of their work leaving Martyn Walsh, sweat pouring down his bald palate as he throws himself around, to thrill with dynamic bassline and guitarist Graham Lambert, oft under-appreciated for his contribution to the Inspirals sound to add beef and substance to the songs. Stephen Holt has grown back into the role of front man and now you couldn't imagine that he hadn't been on stage for over twenty years when he got the call to come back.

The big anthems remain just that. This Is How It Feels and She Comes In The Fall are as thrilling, life-confirming as they were back then. Add to that list the likes of I Want You, Two Worlds Collide, Saturn 5, Dragging Me Down and Sackville and you see why the Inspirals were heralded as possibly one of the last great singles bands. But then place last year's A To Z Of My Heart and singles Spitfire and set-closer Let Me Down next to them, the new material stands toe to toe refusing to budge an inch and whilst they might not draw the crowds they did in their heyday, everyone here is singing along to every word.

And that's what makes Inspiral Carpets such a brilliant band. You're not going to get mind-bending improvisation, on-stage theatrics or big statements, but you're guaranteed that you, and everyone else in the building, can dance, sing, jump about to each and every single song they play. They're a close-knit gang and for eighty minutes or so, they let you be part of that and to lose yourself in a communal celebration.

Inspiral Carpets played Joe, You're So Good For Me, Keep The Circle Around, This Is How It Feels, She Comes In The Fall, A To Z Of My Heart, Two Worlds Collide, Spitfire, I Want You, Sackville, Find Out Why, Caravan, Dragging Me Down, Let Me Down, Human Shield, Further Away, Directing Traffic and Saturn 5.