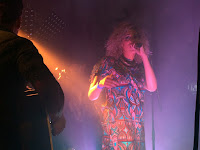 One of the things about writing is a blog is that you get categorised as only liking one type of music. We'd been invited to the launch of Lily-Jo's new EP Need To Know, but we felt it was with a sense of trepidation of what we'd think. What the night showed that is that a great voice and songs can transcend artificially created genres and by the end of the evening we're nodding and tapping our feet along with everyone else to the soulful rhythms filling the room.

Lily-Jo played eight songs, plus an encore of the classic standard Come Together, and what immediately strikes us from the opening track Pressure is the range of her voice and the way she can effortlessly move through the gears as well. Second track Bring Me Back has hints of soul to it that make it feel understated, but you could imagine someone putting a huge beat underneath it and it being a massive dance floor smash. It has the immediacy that implants it in your brain leech-like and we ended up humming it on the short walk home despite never having heard it before. It's our favourite of the evening.

Soul Food sees her mix her vocals with those of her backing vocalist Hannah to great effect until the song descends into a crazy breakdown led by her keyboard player and drummer before slipping back seamlessly into the main section of the song. Before singing the title track of the EP Need To Know she explains the song is about insecurities and encouraging people to go for their dreams which she's doing - it's hard to believe that one of those was whether she was a good enough singer. Armed with an invitation for the audience to sing along, it's a great piece of pop music - and there's nothing wrong with pop music, especially when it comes with a message that "you're worthy, don't let anybody take it away" rather than some of the less inspiring subject matter that frequents the charts these days. 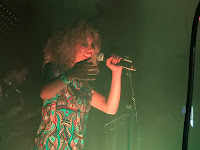 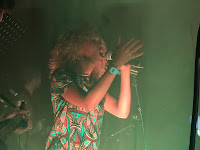 Next up she invites Howard Rose, who was recently on the BBC show The Voice and who played a set earlier in the evening, back on stage for an acoustic cover of Coldplay's A Sky Full Of Stars. It sits oddly with what goes on around it, but shows yet another accomplished side to Lily Jo's voice.

She finishes the main set with the remaining three songs from the EP - Show Me, We Were Young and Fill Up Your Cup. Show Me is a beautiful ballad underpinned by a slightly unnerving keyboard line, the sparsity of the song until it blossoms into a upbeat chorus and the clarity of the sound set-up allowing us to hear every little intonation of her voice and the emotion and intensity contained within it - a theme that runs through most of the evening. We Were Young has a similar impact, the music managing to both capture both the message of the track, but allowing the focus on to the words of the heartfelt love song and Lily-Jo's voice. The EP's opening track Fill Up Your Cup is the most upbeat track of the evening and a fitting set-closer and shows that Lily-Jo's voice is strong enough to break through a more full-on sound.

The encore of Come Together sees the room do exactly that, some dance, some tap their feet, others nod their head, but it's a fitting celebratory way to sign off the evening, allowing the musicians to improvise their way through as well.

The five tracks from the EP - as well as the two originals that aren't - have a diversity in style and a quality inherent in their songwriting which provide the perfect framework for Lily-Jo to showcase the range and depth of her voice.  Add to that her infectious personality and excitement at being up there on stage and a warming humility at the reception she gets from the crowd and you can see her playing to much bigger crowds than this.

Call it a guilty pleasure or whatever, great pop music is great music nonetheless - it's not all about effecting some kind of cool, having some hidden meaning, pretending to not want to be heard by the masses or anything else that  - and anyone who says any different is a liar. Lily-Jo makes pop music that's easily accessible to everyone - one look at the age range around the room tells us that - but with a depth to it that marks out the great from the ordinary.

Email ThisBlogThis!Share to TwitterShare to FacebookShare to Pinterest
Labels: Lily-Jo