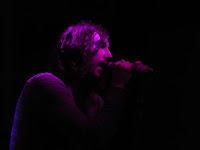 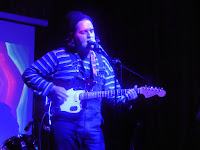 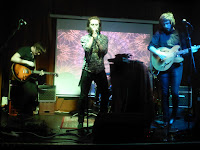 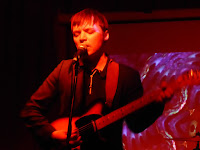 Astral Elevator is a fabulous monthly night at Gullivers in Manchester. The line-up is hand-picked by the promoter from bands from in and out of town that she loves that loosely are attached to the "psyche" monicker. Tonight's line-up sees local returning heroes Purple Heart Parade play their first hometown show in ages, supported by fellow Mancunians The Jungfraus, Dublin's This Other Kingdom and London's Velvet Morning. 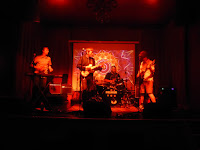 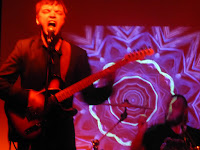 The Jungfraus are first up. It's a sign of the sheer volume of bands in Manchester that they've already released a debut album and have just finished their second and we've never heard of them until now, something that will be rectified. Their songs are full of dramatic twists and turns. The first two songs are new ones - Whiter Shade Of Green and Half Full Of Glass - and they journey through a range of musically contrasting ideas, incapable of standing still in one point for more than a fleeting moment. It could sound awful but it doesn't as they gel without fail. The likes of Wednesday 2.41, which they recently revealed a demo version, and Pride Of The City all bode for their second album.

Front man Mick Kenyon exudes that awkward nervousness that makes you instantly warm to him, but he compensates this with a hyperactive performance that reminds you of early Pulp. His vocal range jumps around with the disparate strands that his band mates draw for him. They close with the brilliantly titled Eleanor On The Back Of My Eyelids from their debut album and by this point they've already charmed the room. 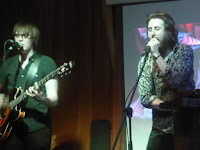 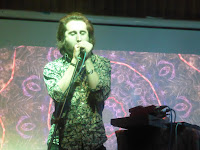 Next up are Dublin's This Other Kingdom who play a selection of tracks from their recent debut album Telescopic. As opener Adelaide strikes up, it's clear that their take on psyche is a darker, more claustrophobic one. They aim big with their songs, creating a huge wall of sound through which front man Del's vocals tunnel through - the effects laden on his voice given it all a menacing, threatening edge that also has us transfixed as it engulfs the room.

Unlike so many "psyche" bands though, they don't draw out the songs, pretty much everything clocks in under four minutes and this helps break them down in manageable chunks and give us all space to breathe and regroup as they continue to pummel our ears with their magnificent onslaught. There are moments, often when the others contribute backing vocals, where the shades they paint become lighter and shards of melody protude out, but it's only brief respite before Plasticine Dream announces itself as we descend back into their spiraling whirlpool of guitars and they end the set with Vacate The Horror with Del amongst us in the audience. 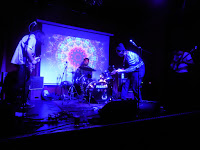 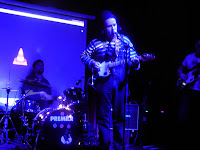 Velvet Morning's set gives us time to catch our breath back, their take on "psyche" is a more relaxed, atmospheric one. With a debut album Gorilla set to be released next week, it's a surprise not to hear more from that although we do get the majestic opener Go Cry To Your Mama and Art Collector and we do get last year's beautifully blissed debut single The Green Whale as well.

Their songs take their time to build, always on the edge of exploding but with delicate control of the detonator and an attention to detail in the guitar work that entrances the audience. It's the intricacy of the songs, and credit is also due to the massively improved sound at Gullivers, that holds us enthralled in their wake. Their final song She's A Livewire with its big swirling guitars hints at them breaking off the shackles, blowing our minds and creating something truly transcendental in time. 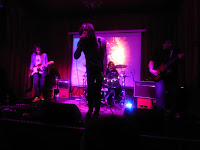 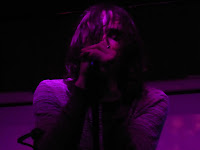 It's been a while since Purple Heart Parade played in town as they've been off winning over London crowds on a regular basis as well as spending time in the studio working on new material and Manchester gets its first taste of some of this tonight. Back to being a four-piece this gives them an edge that sometimes got lost in the sheer weight of what had been going on up on stage previously, it creates the space for Ste Woods' bass and Mike Bee's guitars to let loose and take centre stage.

They start with two new ones - the first Shadow Dance and the second with the working title New Romper Stomper - and it's clear that they've developed so much as a band whilst they've been burrowed away. They've retained everything that made us fall for them after a long courtship when we weren't sure whether they were the real deal and their vision is expanding before our eyes. They've ripped down the sonic boundaries, upped their ambitions and looked upwards and outwards. Gullivers feels way too small for their ideas, the scale of their sound and where they're heading. Desolation Angel is the best case in point here - an understated piece that builds slowly and rather than bowling us over with sheer power seduces us with its subtlety.

Of course you're never able to take your eyes off front man Pete Cowap, who completely loses himself in the music, oblivious to everything and everyone around him except the music. At one point he leaps into the crowd and finishes a song head down on his knees, completely lost in the moment and the music he and his cohorts are creating.

Purple Heart Parade are on a major upward trajectory at the moment. New songs that build on the already impressive foundations, a line-up that feels and looks settled and a ever-growing fanbase both in Manchester and further afield. Exciting times lie ahead.

Email ThisBlogThis!Share to TwitterShare to FacebookShare to Pinterest
Labels: Purple Heart Parade, The Jungfraus, The Other Kingdom, Velvet Morning