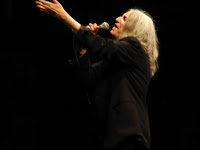 The word legend is one that has wormed its way into common parlance to such an extent that its usage is practically meaningless. However, a packed Manchester Apollo had gathered for Patti Smith to witness someone truly worthy of the monicker play their timeless classic debut album Horses album in full.

This is no cash-in run-through though, nor is it an exercise in blithely recreating the album note by note or smashing it to pieces and rebuilding it to something almost unrecognisible. It’s a set that retains all that raw emotion that dripped from every single note forty years ago whether it be in the rock / punk art of Gloria that has the front rows bouncing around or the more reflective likes of the suicide lament of Redondo Beach, the nine and a half minute funereal tale Birdland that has them stood stock still in awe and even sees a few tears fall such is the raw nerve of paternal loss that the song communicates about. And that’s only three songs in.

Horses is a record that if released today would be met with mostly confused stares from a public brought up on low attention spans driven by the three minute disposable iTunes download culture. It flits and scurries around moods and atmosphere, from moments of intimate sparsity through to thrilling bursts of.  Whilst Smith, ably accompanied by Kaye and the likes of Tom Verlaine and John Cale and others from the New York set she hung out with, produced moments of real genius throughout the later part of the 1970s, nowhere is it as concentrated and persistent as it on her debut. Almost forty years on, the record is almost as unlistenable to in one sitting as ever without a strong constitution and absolute focus. 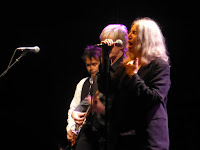 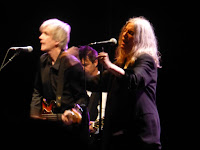 Fortunately, the 4,000 or so in the Apollo have that focus and the live performance opens it up in parts, making it more palatable, yet without diluting the passion it embodies.  Never have I been at a gig in this hallowed venue where there’s absolute silence and respect from the audience, both during the songs and between when Smith starts to speak in streams of consciousness about being hit by paranoia mid-song, how she never does what the artist tells them to do when she’s in a gig audience and how her baby grandson looks up at her and wonders what he’s looking at.

As she leaves her band to perform a medley of Velvet Underground songs, she moves down to the barrier to meet her adoring generation-spanning audience and soak in the love that’s flowing towards her. She also recognizes where she is – talking of the 1978 Apollo show that was attended by the likes of Morrissey, Marr and Booth, just some of the disciples that she made an indelible mark on as well as a Rickenbacker she bought at the time here that’s lasted longer than any husband.

It isn’t just about Smith though. Her trustworthy sidekick Lenny Kaye is still there on guitar, providing those moments that make Horses not just about Smith’s words as are the band she’s been touring with for almost a decade now. Tony Shanahan on bass and keyboards, Jack Petruzelli on guitar and keyboards and Jay Dee Daugherty on drums do more than simply replicate the sonics of the album, but embellish it and manage to give it a contemporary sheen without compromising that unique dynamic spirit of the original.

As Elegie moves to the conclusion of the Horses section of the set, Smith recites a list of departed contemporaries from the time the New York scene she was part of formed the most important music and art movement of its time and you reflect that she might be the last one standing.  It feels like she’s channeling their spirit and energy as a conductor of the scene of which she formed such a central part in the mid-seventies, staring skywards as she recalls peers, collaborators and lovers, all departed. Kaye adds Tony Wilson to the list and a cad in the audience shouts Frank Sidebottom back. 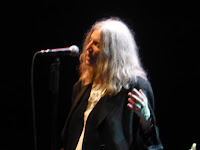 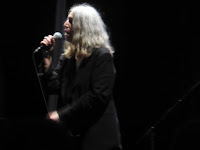 The Horses set is followed by a series of later period Smith tracks that are carefully selected to bring the evening to a rousing conclusion. The likes of Privilege (Set Me Free), Dancing Barefoot and Because The Night are what I guess you’d call the hits reprise section of the evening, had Smith ever traded in such things. Here they’re exciting thrilling visceral moments of communion as is the set closing People Have The Power – a glib call to arms in the possession of others, but a standing on the barricade leading the revolutionary charge over the top in the hands of Smith and her band.  She recites a minute or so of spoken word Piss Factory to placate a repetitive request from the audience to almost total silence. The evening is concluded by a cover of The Who’s My Generation, completely transformed into a sprawling 1970’s punk epic, Smith adapting the words and finishing the set guitar in hands ripping the strings from their bed.

At sixty-eight, Smith still has the unquenchable energy and desire to perform. She’s no perfectionist, as she quite freely admits as she tells us she’s not a record, she’s immersed in the music and the tidal wave of energy and love that flows from audience to stage and sends it back magnified, captivating each and every person in the room. You see why she’s inspired so many – male and female. Horses is a moment she never managed to recreate, but then no one else has done since.