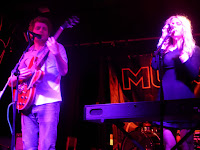 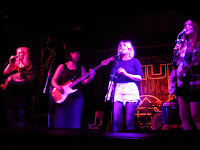 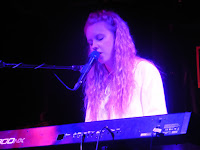 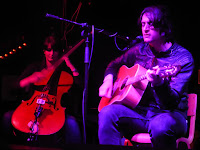 Tonight’s gig is the latest in a series of MUK Records club nights at the Night And Day. Featuring a varied and eclectic line-up, the evening also doubles up as a charity fundraiser for the Mustard Tree charity. Headliners Bird To Beast reveal nine songs from their yet-to-be-recorded second album and are supported by the eclectic mix of Reid Anderson, Megan Dixon-Hood and Foxtales.

Opening up is proceedings is Liverpudlian singer-songwriter Reid Anderson. He starts off by introducing opening track Rise And Fall as a song about a pregnant transvestite.  What’s immediately obvious is his songwriting craft and the beauty of the interaction between his acoustic guitar and his cellist Steph’s interventions which lift this out of the traditional realm of this genre. On Oh My Dear, his acoustic guitar is on the verge of going disastrously out of key but this raw rusticness combined with the rougher edges of his vocal range accentuate his storytelling. 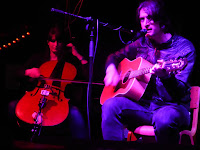 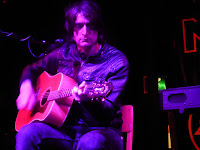 His set is full of interesting anecdotes – Cross Over The Road is a nod to the 1930s delta blues singer Robert Johnson and his album Crossroads whilst The Wait is an Ennio Morricone inspired cowboy break up song where the cello takes the lead in creating the atmosphere of the track as it does in providing the dramatic effect on Lonely Boy that follows. He invites Sam and Hannah from headliners Bird To Beast on stage to sing backing vocals as he moves to the keyboard for a couple of tracks that show another impressive string to his bow – the ten year-old Where You’re From, a song about the birth of his son and Pure Imagination, one of the most interesting cover choices we’ve heard as it’s from the Willy Wonka movie and was penned by Bowie inspiration Anthony Newley.

We’re hugely impressed by Reid. The opening slot at the Night and Day isn’t probably as suited to him as it could be, we’d imagine him right at home in a dark dimly-lit bar where he has the time and space to expand on his stories behind the songs.

Next up is Megan Dixon-Hood, a Cheshire-based singer whose two EPs – last year’s Early Morning Rider and January’s Siren had impressed us. We were expecting her to perform solo, but she’s accompanied by a guitarist and a bass player which add shape and depth to her sound that sometimes can get lost with just a keyboard. It also shifts the focus of creating the framework from the songs away from her as well. But it’s her voice that stops us in our tracks as opening song The Storm soars and swoops beautifully. 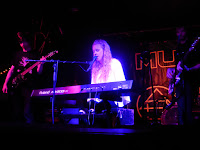 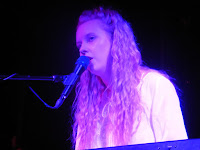 I Am A Thief starts with a beautiful rippling keyboard that feels like it’s dancing around the room.  We can hear a lot of Rae Morris’ early work in here, a raw innocence mixed by an innate songwriting craft that points to great things.  A Year From Now has the guitars and bass up in the mix which means Megan’s voice has to be more forceful than the previous songs, but there’s little doubt that she pulls this off.  Debut single Early Morning Riser starts with a mournful solo keyboard that allows her once again to demonstrate that range of vocal that she possesses as it dictates the mood and tempo of the song. She concludes with Siren and a new song called Time that suggests that her creativity is still burgeoning and that she’s a name to keep an eye out for.

Next up are Foxtales, who describe themselves as four non-boys and one non-girl. Three of them – Amy, Angela and Cassie - are instantly recognisible to us as of Literature Thieves though and some of the songs in the set we remember from their later shows just before and after they’d recorded their debut album that never saw the light of day. Whilst their shows were usually drunken and shambolic, but a whole load of fun nonetheless, the name change and the additional members seems to have added a focus and pulled together the unquestionable talent that was there and the stunning impact that their three voices had in any combination of lead and harmonies. 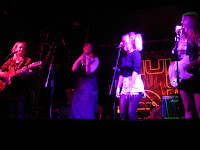 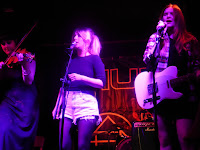 The presence of a drummer gives the songs additional form and substance – opening track Work No More being a prime example - and accentuates the differences between the girl’s voices. Whilst there’s still a mandolin and the non-boy non-Literature Thief plays violin on some songs, guitars are much more to fore and this accentuates the Celtic influence that was always there in their songs even prompting a couple of the audience to perform a jig at one point.

By the end of the set and after they play a couple of brand new songs, including one possibly called Drink From Your Lips that’s a delirious mix of stop-start verses and ascending / descending vocals that show they’re not afraid to experiment with their sound, it feels like they’re finally getting their shit together and out of the majestic chaos that prevailed previously is coming something a little more focused yet no less exciting. 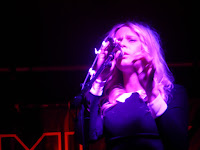 Bird To Beast make a telling statement of intent before they even play a note when Sam tells us that they’re just going to play new songs tonight as they prepare to record their second album.  They’re also joined tonight by a third member who plays both drums and additional guitar on selected tracks. They’ve recently been adding new songs to their set but always had the likes of triumphant singles Elephant and Catacombs to fall back on. Tonight, that safety net is removed.

Immediately though we’re reassured. As Hannah starts to sing the opening line to Hold Me Tonight and then Sam comes in, the delicious warmth of the interaction of their two voices calms any fears. On the evidence of tonight’s nine songs their second album promises to be one of those classic albums that are loved by everyone that has the luck to hear it. They point to a more balanced split of vocal responsibilities than the first album, particularly when Hannah plays the beautiful ballad Crazy solo and unaccompanied on the keyboard.

In Love With Another Time is introduced as a song about “pining after the past” and there’s something in what Bird To Beast create that’s rooted in classical songwriting structures and boy/girl harmonies. It’s got a sense of drama running through it that permeates all their best songs.  Old Fashioned Girl nods in the same direction, Hannah leading and Sam adding harmonies to the chorus – its ultimate beauty is in its simplicity, its warmth and timelessness as it builds slowly. Skin is a bit darker, more foreboding as it starts and hints at Radiohead OK Computer atmospherics in parts albeit laced with Hannah’s soaring voice piercing through them. And when Hannah channels her finest Edith Piaff on Final Bow as Sam plays a hopelessly off-key violin that melts our hearts, we’re transported to a Parisian piano bar. 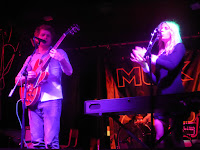 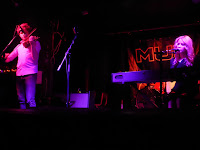 The one concern we’d had with the new songs we’d heard previously was that there wasn’t an obvious successor to the likes of Elephant as a single that would get the album the attention it’ll deserve when it finally sees the light of day. We needn’t have worried. Forever Yours is that song, propelled along by Sam’s acoustic guitar and charmed by tongue-in-cheek lyrics such as “I want to know if my body’s pleasing, I want your tits, tell me I’m well hung” before it explodes in a huge chorus with the simple message “I’m forever yours, and you’re forever mine.” It’s a brilliant three-minute pop song.  Similarly closing song Sorrow screams single out as well - upbeat, laced liberally with those delicious vocal harmonies, tambourine and an acoustic guitar that has you involuntarily tapping your feet in time.

Whether Bird To Beast ultimately get the recognition the ecstatic mixture of these two contrasting yet perfectly matched vocalists and their perfectly crafted songs deserves or whether they end up sitting alongside the likes of Liam Frost and Stephen Fretwell in the ranks of the criminally ignored, their forthcoming album is going to something exceptionally special.