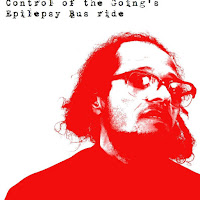 Control Of The Going describe themselves an "psychedelic / shoegaze alternative sounding band" and they've just released their debut EP Epilepsy Bus Ride following a number of demos revealed on their Soundcloud.  What we found is an interesting proposition, a sound that instantly feels familiar, but not like anyone else around the Manchester scene at the moment.

Opening track Reflection kicks in with three guitars creating a loop with an insistent hook that isn't in your face, but which manages to burrow its way into your conscience even before Liam's voice comes in. That theme is repeated across the three songs here, there's a vein that they tap into, you can hear echoes of some of the sparser darker elements of Joy Division at points and on the EP's highlight The Message we can also hear Pavement banging against the walls begging to be let out. They're far from copyists though, they appear to have found a niche around which they can evolve - and with a little of bit of research you can find another fourteen songs on their Soundcloud that amply demonstrate that they're doing their development as a band in public rather than hidden away in a rehearsal room somewhere.

Front man Liam's vocals are intriguing too. On first listen, they feel a little deadpan, droll even (and there's plenty of lyricists who have a catalogue of wonderful records forged around that), but as you become familiar with it, the warmth starts to exude out even when the subject matter of the song is dark ("page is wearing thin, how will I ever win, desire fades away, fire burns away" on If Only as an example) as you make the connection between voice and music and between the music and the words. In The Message the half-spoken, half-sung approach around which the insistent guitar hook is wrapped is perfect in pitch and tone for the mood that the song creates. It's to be hoped that this isn't something that they lose as they develop further.

Epilepsy Bus Ride is a stunning debut EP from a band that's been prolific in writing, demoing and previewing songs over the last few months. It gets better on every listen too, so needs time to fully appreciate its modest charm. The title of EP is, of course, awful, but everything else around it suggests that, just like Ist Ist, they're going to be a band that's going to stand out from the crowd and make people sit up and notice them.

Their debut live show is at The Night and Day in Manchester on July 10th.

The EP is available to purchase from their Bandcamp page.