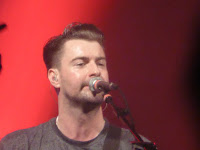 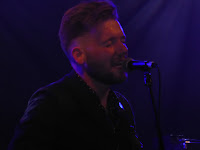 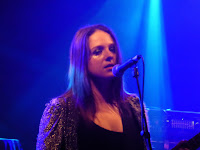 Ahead of their huge sold-out Heaton Park homecoming gig on Friday, we caught Courteeners in an intimate warm-up show at Liverpool's O2 Academy mixing together a set of songs from across their four albums to date as they strive to pick the perfect setlist for the biggest gig of their career. Support came from the people's poet Liam Frost and his band and thrilling Manchester-based newcomers Louie Louie. 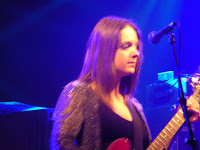 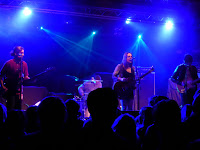 We're delayed getting into the venue so we only manage to capture three songs of Louie Louie who had come highly recommended to us and, even from the limited amount we saw, lived us to the promises that people had made us. The focus is around the dual vocals of Rita and Pedro bouncing off each other over guitar riffs that are big, bold and exciting. They add a third vocalist for their closing track Lighthouse, a song destined to win them over a whole load of new fans, but already their stage presence and the three songs we heard have us excited to see them again very soon.

Liam Frost was hand-selected for the support slot for these two gigs. He and his namesake Fray have history and as he stands on stage tonight you might even mistake him for the elder brother of the pair. Touted years ago as the next big thing for a few weeks by the press, he's destined to go down as one of those songwriters that will only be appreciated later in life, quoted and referenced by people who end up more successful than him with a fraction of the talent. 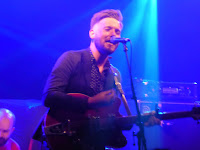 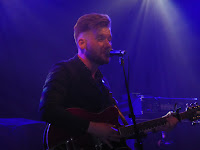 Accompanied by bandmates from their recent Tokolosh project, his set is a mix of tracks from his two criminally under-rated (on a FIFA scale) albums Show Me How The Spectres Dance and We Ain't Got No Money Honey, But We Got Rain and two from last year's comeback solo EP The Wild Places. Christian Madden's slightly off-keyboards make for an exciting new take on the songs, not heard with a band backing for so long and Liam moves around the stage uninhibited by being the sole focus of attention.

The crowd respond politely, some stop their conversations and watch, drawn in by the strength of the songs from the vibrant upbeat Held Tightly In Your First and The City Is At Standstill, before he bravely takes it down for two songs from last year's EP. He encourages the audience to hug their brother before the beautifully emotive Skylark Avenue, before the mouth organ of Shall We Dance and the false duet of Your Hand In Mine (originally recorded with Martha Wainwright) bring a too-short half-hour set to a close.

Liam Frost played Held Tightly In Your Fist, The City Is At Standstill, The Wild Places, Who's Gonna Love You?, Skylark Avenue, Shall We Dance and Your Hand In Mine. 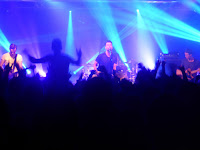 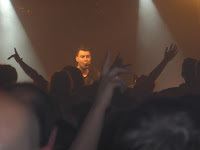 Courteeners are the Rugby League of the music world. Far superior to their  more lauded equivalents that the Southern media fawn over yet most loved in the cities and towns of the North of England where their roots speak to the people. They appeal to the human side of their fan base, most evocatively evident by the way normally too cool for school teenage boys are reduced to a dribbling mess by a glance, a word or an acknowledgement from Liam Fray, the leader of their gang, the one they look up to for inspiration and whose words echo around this hall tonight long before and after they're on the stage.

The fact that they're ending this week playing to 20,000 people at Heaton Park is a triumph in itself given the way press and radio steadfastly ignore them. But when you look around the room at the sea of bodies bouncing along, singing along to every word of the likes of Cavorting, Acrylic and the double headed beast of Not Nineteen Forever and What Took You So Long that bring the evening to a close, the connection they make with their audience is undeniable. It's something so few bands can even come close to approaching in these days of sterilized major-label driven “indie” guitar music that glares at you from the front of the NME and sits as the token nod to the alternative on the Radio 1 playlist.

They're completely unashamed of their roots as well. They come on to the sound of Oasis' Morning Glory, a move equal parts ridiculously brave and confident, and they add in sections of The Stone Roses' Standing Here, Ian Brown's If Dolphins Were Monkeys and James' Tomorrow into parts of songs as a nod to the bands that they grew up with the way so many here are growing up with them. 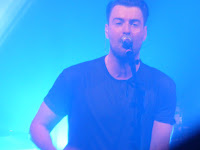 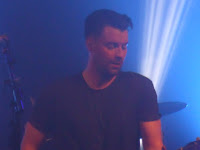 Unsurprisingly, it's the songs from St Jude and Falcon that get the most rapturous reception. Whilst the masses down the front sing along to every word, even drowning Liam out at points, the more reflective, less adrenalin-powered songs from Anna and Concrete Love don’t quite grab the more casual fans around the fringes in the same way.  This does give the set a stop-start feel in parts, but it's more down to the attention span of parts of the audience than the performance of the band.  The likes of International and Small Bones might lack the immediacy of their earlier singles, but it doesn't mean they're any lesser songs for it. It's an age-old dilemma for a band though when they've moved on creatively and tonight they get the balance just about right – the simple route would have been trotted out more of those first two albums and stood back and bathed in the glory, but they're rightly proud of all their albums.

As the opening strains of Not Nineteen Forever strike up, the whole place erupts and the almost sauna-like conditions inside the Academy almost reach meltdown levels. We've already had chants of Manchester la la la in a not unexpected display of urban parochialism, yet this song, which was the unofficial anthem of Manchester United superseding Liverpool as the team with most league titles, is stripped of that unpalatable connotation for the hometown elements of the crowd as we’re all joined together in a mass communal celebration. There is the ubiquitous dickhead who belies his negative IQ by managing to light a flare and let off a smoke bomb that puts those around him at risk and threatens to bring proceedings to a halt because the power of music isn’t enough for them. It's not big and you're very definitely not clever. That's swiftly forgotten as What Took You So Long, its calling card refrain having been sung throughout between songs, lifts the crowd still further as the inevitable conclusion to the evening.

Courteeners strip music back to what's important – songs that mean something to the people who listen to and buy them with lyrics that people can relate to and can sing along to with their comrades in arms in the crowd.  It's the power of community, of a peculiar spirit that exists in the parts of the country where they're revered. Their success is a flicked V-sign to their doubters, to those who put them down and dismiss them – they’re a band of the people that the media don’t talk for or to.

Courteeners played White Horses, Are You In Love With A Notion, Cavorting, Please Don't / Standing Here, How Good It Was, Summer, Lose Control, Next Time You Call, International, Take Over The World, Small Bones, Why Are You Still With Him,  If Dolphins Were Monkeys / Cross My Heart And Hope To Fly, Acrylic, Yesterday Today And Probably Tomorrow, Aftershow, Here Come The Young Men, Beautiful Head, Not Nineteen Forever and What Took You So Long / Tomorrow.