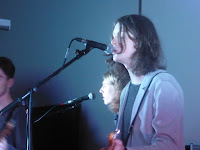 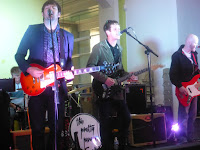 A Blossoms gig in a library? In a summer of increasingly important festival appearances and before they make the step up to venues like The Ritz on the back of the forthcoming Blown Rose single, there's no way we were going to miss a gig in such an interesting location. We made the trip up the M62 and were rewarded with the debut performance of a new song as well as a great support slot from local heroes The Pretty Pennys.

First of all, it's important to mention the venue and the organisers of tonight's event. If the austerity that our esteemed government is enforcing on the North of England ever meant the closure of this library space, it would make an exceptional live music space (except for the lack of a bar at present). But for now these intermittent live shows are a fabulous way of utilising a public space and bringing music to a town and a demographic - the lack of bar means this is an all-ages show - that isn't usually reached by the current workings of the music industry and the organisers should be applauded for this and supported in doing more. This is put into even starker contrast as we walk past a number of town centre bars belting out Whitney Houston and all sorts of chart pap as we pass. Everything runs like clockwork, everyone is exceptionally polite and helpful and the sound set-up puts a number of established venues to shame. This is part of a series of events - and the ongoing Loud In Libraries project - and there's an as-yet-unannounced follow up to this in September. 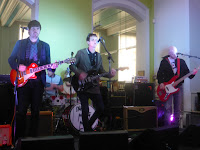 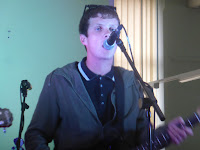 Opening up at St Helens' own The Pretty Pennys and they've brought a decent following with them that know the words to most of their songs. The four-piece have crafted some excellent songs such as Never Too Lonely, Head First and Tongue Tied and their live set accentuates this. Front man Ant Critchley has a voice and a stage presence that holds the listener, even if they're not familiar with the songs and when guitarist Phil Harrison takes over lead it provides an interesting contrast.

They've got the look of a million lad bands, but what makes you think that they've got something that might break them out of playing local gig here and in Liverpool is the consistent quality of those songs - classic structures but with a personality of their own, hooks that grab your attention song after song. 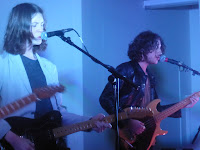 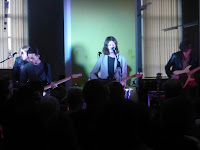 After the celebratory nature of their recent sold-out Club Academy show, it's strange to see Blossoms in this environment, but you sense at present that they'd set up and play anywhere you'd ask them to such is the unstoppable momentum that's building behind them and the way that every time you see them, there's something new. It's often subtle like tonight the way the guitars are higher in the mix and turn the likes of Madeleine, Lava and the concluding section of Blow into big belligerent beasts of songs without compromising on the groove that underpins them, but it's turning them from a band with huge potential into one that's fully formed and ready to conquer the big halls of the nation.

What Blossoms have is something that appeals to everyone and tonight's crowd ranges from girls who might not yet even be classed as teenagers, through the lads that have piled in from the pub minutes before the band come on, the thirty and forty somethings who see an reincarnation, reinvention and a remodelling of the music they fell in love with as well as the patrons of the library who are there just to support the event. Future single Blown Rose and the melancholic longing My Favourite Room are songs that it's OK for parents and kids (and grandparents) to love - simple melodies that evoke all sorts of memories. There's the darker side of their oeuvre, Smoke and Lava in particular, dark psychedelic claustrophobic and brooding but with gorgeous melodies protruding out of them and the radio-friendly singles Blow, Cut Me And I'll Bleed, You Pulled A Gun On Me and the aforementioned Blown Rose.

Then there's the new - On The Beach At Night and Charlemagne (which may not be the correct spelling) - which sees them expanding their horizons, experimenting with a different sound without losing sight of their basic appeal.  It's the debut of the latter - sparse in the verses, piercing shots of keyboards and flashes of guitar in the lead-in to the chorus and a gloriously loose feel to it before the guitars kick in and take the song off to its conclusion. Tom tells us that if it goes massive, the audience will be able to say they heard it first. If Blossoms continue to progress at this rate, they'll be able to point at a blue plaque on the wall and tell their kids that they were at the show that it celebrates.

Email ThisBlogThis!Share to TwitterShare to FacebookShare to Pinterest
Labels: Blossoms, The Pretty Pennys