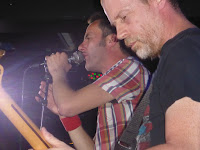 Twenty-three years since they last played a gig, Thousand Yard Stare staged a one off show at London's Borderline. At Even The Stars there was much excitement at the news of a reunion and we made the journey south to catch them. We, and the rest of the crowd, were not disappointed.

Back in the early 90s Wednesday mornings meant a trip to the newsagents to snap up copies of the music weeklies. We would read about new bands and in late 1990, Thousand Yard Stare caught the eye. They were championed by Steve Lamacq in his weekly NME column and by James, who took them out on a massive UK tour in late '91. Hailing from Slough, the 5 piece released a host of well received EPs and two albums but never made the leap to Top of The Pops or to the higher parts of the charts. Tipped as the new Smiths, they had called it a day before the much hyped Britpop scene began. They could and should have been household names. 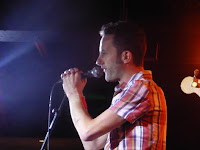 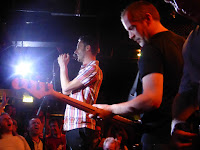 Tonight's show sold out months ago and by the time Dom, Kev, Sean and Giles take to the stage to run through instrumental opener Junketing, the venue is jam packed to capacity. From the off, it is clear that band are not just going through the motions. They certainly don't sound like they haven't performed in public for over 20 years.

Frontman Stephen joins the stage amid great cheers from the crowd. Version of Me, their last single from 1993 is up next and is as fresh now as it was back in the day. It is power charged and throwing it in the set so early demonstrates the wealth of material they have. Before Cottager, Stephen announces it as an old one, before correcting himself as all the songs are old ones. Half Size, one of the few songs aired tonight from the long lost second album, is every bit as good as their earlier material, featuring an energetic rhythm section and some great lead guitar too. Thousand Yard Stare were purveyors of pop and they have lost none of their charm or appeal.

Seasonstream slows things down a little. It is one of those epic tunes they do so well. The funky wah wah driven Three Doors Down, from their debut EP shows their versatility. I had forgotten just how good their back catalogue was. Comeuppance is another epic, epic song, giving the band time and space to showcase their craft whilst upbeat tunes like Keepsake and What's Your Level keep the crowd dancing and we get a little bit of surfing too. Someone even loses a tooth mid set, given the excitement in the crowd.

Wonderment, the classic debut single, ends the set with Stephen dedicating it to his late mum. Heavily influenced by early James, it is dominated by Giles Duffy's soaring guitar. Tonight's version is stretched out to around 8 minutes. A fine ending to the main set and the crowd loved every minute of it. 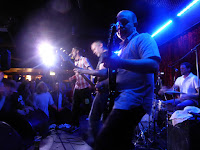 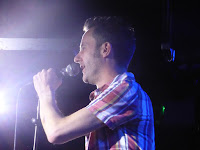 Spindrift is a late addition to the set and starts the encore, the band joking that they might not remember how to play it. It is another rousing instrumental track and adored by the crowd. No Score After Extra Time sends the crowd into yet another frenzy before a cover of Wire's Strange sees the band at their heaviest. Stephen asks if they have missed anything, and thanks the crowd, saying it has been amazing, before promising another show in twenty-two years.  The epic Wideshire ends proceedings and everyone goes home happy.

The gig exceeded our expectations. The band delivered a fine set, packed with classic, timeless pop nuggets and plenty more besides. The audience reaction throughout surprised us and the band too. It would be a shame if they didn't play a few more shows.

We interviewed them here ahead of the show.