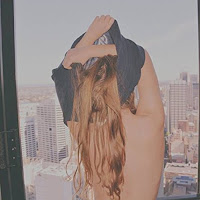 Kid Wave first came to our attention last year with their Gloom EP and we caught them earlier this year supporting Heavenly label mate Jimi Goodwin and again at Live At Leeds. All this whet our appetite for their debut album Wonderlust, but what they've delivered has way surpassed our expectations.

It takes just seconds of the opening track of Wonderlust to convince us that we're about to listen to a truly special debut album. It feels so perfect the minute the guitars chime up and that feeling never leaves the record to the very end. Whilst almost every song gets ushered in this way with a blast of guitar that sets the tone for the rest of it, this never gets tired or feels repetitive because of the melodies that underpin the dual guitars, bass and drums that get mixed together perfectly throughout the album to the point that there isn't a weaker track on the album, let alone a weak track.

The likes of Honey and Best Friend are huge songs, vociferous in their intent and in their delivery. In the choruses, Lea's vocals, layered in parts with drummer Serra's backing vocals, lift the songs up and recall the heyday of the likes of Belly and Sleater Kinney. For a band to strive to such ambition in the range of their sound on a debut album has to be commended especially when it hits the spot every time. It's a blueprint that's adhered through most of the second side of the album - but, as we stated earlier - it's done without ever sounding like they're going over old ground, especially the magnificent Sway, which makes its case for being the standout track on an album full of them. And those guitars make the hairs stand up on the back of your neck the way all great guitar music should do.


Even when they slow things down mid-album on Walk On Fire, which being over a minute longer than anything else on here allows them to let go and point us towards a more progressive future if the mood takes them, it displays an assurance and control that so few bands can master so early in their development - and they do it without compromising any of their raw spirit and energy in the process.

The standout track at the live shows, I'm Trying To Break Your Heart, doesn't even enter the fray until track ten and then it takes us aback slightly as we'd forgotten all about it such is the enduring, consistent quality of what's preceded it. It slaps us around the face though at the insolence we've shown. On record it's even bigger, bolder, those guitar riffs accentuated to just about the perfect point where any more and it would be excessive.   Dreaming On concludes the album and is an apt title as the song feels much longer than its three and three-quarter minutes as the extended outro takes the listener to a world that's dream-like in the effect it cleverly creates.

For a label that's constantly released classic albums for the past twenty five years, Wonderlust is another addition to a canon that includes early Manic Street Preachers singles, most of Doves' recorded output, The Magic Numbers' debut, Saint Etienne's finest pop moments. It's so good that it stands comparison with all of this.