Track Of The Day : Black Casino And The Ghost - Age Of Contagion 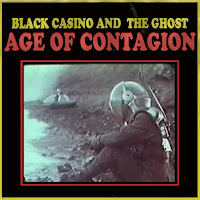 Black Casino And The Ghost are back with a new single Age Of Contagion from their forthcoming second album Until The Waters Run Clear.

The song, backed with a video featuring footage Bogdanovich’s 1968 sci-fi movie Voyage to the Planet of Prehistoric Women and retains and expands upon the dramatic sonic experimentation that characterised their debut album Some Dogs Think Their Name Is No.

The song starts with a throbbing pulse over and travels through various phases on its way to its conclusion, showing a mastery of both claustrophobic frantic electronica in the chorus and an ear for beautiful melody as the song dances through its breakdown section. It's as varied, exciting and as expansive as the debut album, but with an enhanced focus and purpose that suggests Until The Waters Run Clear will be a very special album indeed.

Black Casino will unveil tracks from the album at The Finsbury in London on July 10th.