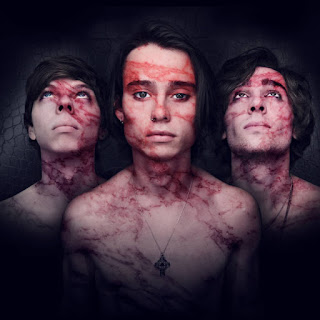 Carnival Club's debut five-track EP Magdalena's Cape is one of the most anticipated debut releases of the year so far and delivers on the promise shown in their rampant raucous live performances.

Those already familiar with Carnival Club will know opening track House Of Cards, the assured opening shot they fired across the bows of the Manchester scene late last year. The riff that introduces themselves to the world sets the tone for what's to come; there's no holding back in the exaggerated over-emphasized guitar work that runs through the song as if Jimmy Page stumbled into the Night And Day and joined a local band on stage while Kai tells us about an "infestation in the back of my mind." You've got to be very good to pull this off without sounding piss weak or hackneyed and fortunately Carnival Club can more than back up their youthful swagger.

Mistakes, Troubles and Kisses is similarly ambitious in its scale; whilst so many young bands' debuts feel like they're scratching the surface and need to eat a full meal and bulk up, this is fully-formed rock and roll with a production that screams big budget but which doesn't temper any of the cocksure arrogance of a band that's fully cogniscent of the impact of what they've created. You're So Hostile does the same, but differently, and again that's crucial. They have a sound here, but it's not one that simply repeats the song before. You know the guitars are coming but not where they're going to take you and in the middle Kai stands tall, imparting his message with a voice that feels far more lived in and world wary than his teenage years would suggest.

The title track is possibly the highlight of the five, a lazier hazier track that allows a pause for breath without compromising on effect especially when the solo kicks in before the final "last night I slept with my shoes on, I won't do that again, three letters branded into me" chorus is delivered with a staggering confidence that more established bands that talk of saving rock and roll or pioneering could do well to listen and assimilate.

The EP concludes with Headache and a full-on battle between guitars and vocals where they'd kept at sparring distance beforehand. The impact though is similarly impressive and as Kai demands "if you tell me the sun is love then explain to me why am I so pale" and just when you think they're going to leave us with a solo that goes off into the distance the song stops dead, testament to the fact that there's still an element of unpredictability and surprise in this record.

Magdalena's Cape is a triumphant debut from a band that looks at the scene they're part of and its seemingly endless celebration of three-minute bangers that in the main couldn't set off an explosion in a fireworks factory, cocks its nose, turns its back and delivers a record that's a frightening statement of both the here and now and potential and intent for the future.

Carnival Club are on Facebook and Twitter. The EP is available on 12" vinyl and CD from their Bandcamp page.  They launch it with a gig at Manchester Deaf Institute on Friday May 12.