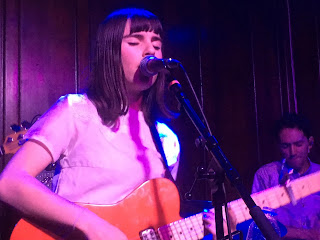 Hazel English's debut Manchester show to a packed sold-out sweaty Castle Hotel music room was a resounding success. An attentive, respectful audience paid their dues to an eleven-song set culled from her recent Just Give In / Never Going Home double EP plus a cover of The Go Betweens' Streets Of Your Town.

Hazel has become somewhat of a secret sensation; initial pressings of her debut EP Never Going Home selling out and becoming Ebay gold without her gathering huge amounts of airplay or major label backing. This is her first trip to Manchester from California where she now resides and like the rest of the room we'd been drawn in by the beautiful yearning dream pop of that first EP and its follow-up which have been combined together for release.

Tonight her and her band play all ten songs from those EPs as well as a Go Betweens cover that's a tribute to her native Australia and create the wonderful warm glow that runs through it. There's no show, no special effects or histronics on show, just beautifully crafted and evocatively delivered songs that do their own bidding. 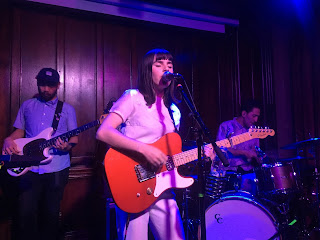 The band alternate between guitars and keyboards throughout the set to ensure that each song is perfectly matched to Hazel's soft evocative voice that brings out the nuances in the words that she's singing. As the set progresses, there's a more electronic feel to the songs as keys come to the fore, and Hazel encourages us to sway around if we choose to and it's hard to resist the urge to lose yourself in the beauty of the songs and performance. Whilst this is a modest start in terms of venue size, this tour is designed to create a buzz to capitalize on later and word of mouth is sure to do just that on the basis of tonight's performance.

Hazel English played It's Not Real, Make It Better, Streets Of Your Town, Other Lives, Fix, Control, Love Is Dead, Birthday, More Like You, I'm Fine and Never Going Home.