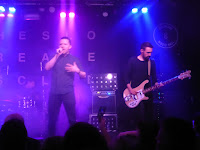 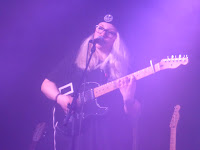 All good things must come to an end. But when they do, the key is to go out in style and that's exactly what The Slow Readers Club did at the biggest date of their UK tour at a sold-out weeks in advance Belgrave Music Hall in Leeds to an expectant, boisterous and dedicated audience that left the place ringing to the echo of the now ubiquitous READERS chant. Support, as on the rest of the tour, came from the brilliant Folkestone duo SKIES.

As The Slow Readers Club did on the James tour last year, SKIES have charmed the audience, most of whom would have had little knowledge of them just two months ago. It's almost impossible not to fall in love with the boundless energy of Alie and Jericho and their songs, each one of them a hit and run assault on the ears that lifts you up on their wave and carries you along with it. Whether it be the insistence of recent single Afterwards or the buoyant infectious stomp of Drone and Hold On, they get the feet tapping and the rest of the body moving involuntarily, always the sign of something special. 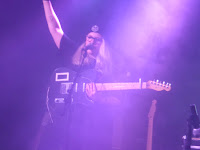 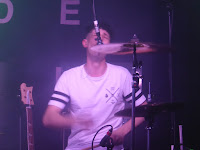 There's moments, particularly when Alie takes to the drum at the front of the stage and the two of them stop the song dead before crashing back in, that they have the audience eating out of the palm of their hands, even those unfamiliar with them before the start. It's something few bands can do, but SKIES make it all look and feel so effortless and hopefully big things are just around the corner for them.

This is the biggest venue on this tour for The Slow Readers Club and it sold out weeks in advance, testament to the ever-increasing pull they've got around the country these days even in cities where they didn't support James last year. And once the cry of READERS dies down and they fix a mischievous bass amp and kick into Fool For Your Philosophy it's easy to see why they're becoming an increasingly unstoppable force as they head into a summer that will expose them to new audiences before returning with new material and bigger dates later in the year. They're a band that now know just how good they are; weeks of people singing back every word as if they're the meaning of life itself and the accompanying unflailing adulation had clearly made them realise the impact their music is having on a growing number of people. Often when a band breaks, the front man becomes the centre of attention, but the other three have also made their mark. The slightly muddy sound can't hide the nuances in Kurt's guitar playing, the groove that Jim's bass calls the tune for and the strident beat with which Dave orchestrates Aaron's now infamous Starkie stomp. 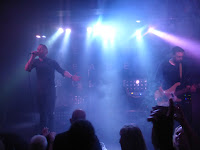 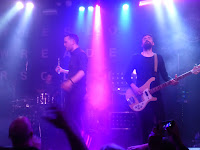 And those words are now being sung back louder than Aaron at times - the uncertainty of "stop right there for one more minute, I'm not sure that I want in it" from One More Minute, one of their oldest tracks, the unflinching but dark declaration of love - "you are my inspiration, future and my past" - that is the set-closing Forever In Your Debt or the self-revelatory newer Lunatic "I know that I'm a lunatic, in days of old I'd be chained to the floor" that people already know off by heart. The faster songs reduce the front few rows to a mass of hot, sweaty bodies hollering at the tops of their voices, whether it be the words, declarations of love to one or other of the band (or even Justin, their merch guy who gets his own song) or the now de-rigeur READERS chant that would make an outside observer wonder if they'd walked into the middle of some cult therapy session. When Jeremy Corbyn spoke less than twenty four hours later about the cohesive power of music, he might have well been watching the live stream of this show as he mulled over what he was going to say.

Whilst 2015's Cavalcade and its singles that preceded it might have been the record that started the love affair for many of those in the room, the songs from their self-titled debut are steadfastly refusing to be outdone either. Sirens, Feet On Fire, One More Minute, Lost Boys and Block Out The Sun have blossomed as the band have and when the rest of the new songs come it's going to be an almost impossible task picking a set list. 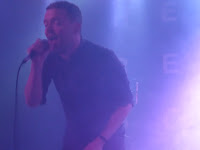 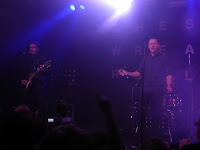 Looking around the room, everyone seems to have a different favourite song from the person next to them, testament to the lasting legacy they seem set to leave as they hit the bigger stages. The other new song Through The Shadows shows that they're also able to master something that's a little slower without losing any of the intimacy of the connections they make with the crowd. And as they hit the end of the epic-sounding Know The Day Will Come, the beams spread across all four faces as they take in the acclaim and the inevitable chants that head their way. If anyone had any doubts about The Slow Readers Club making the next step up, the last few weeks will have dismissed them out of hand.

The Slow Readers Club played Fool For Your Philosophy, Sirens, Start Again, Days Like This Will Break Your Heart, Block Out The Sun, Lost Boys, Lunatic, One More Minute, Plant The Seed, Through The Shadows, Feet On Fire, Forever In Your Debt, Cavalcade, I Saw A Ghost and Know The Day Will Come.

They play Dot To Dot Festival in Manchester (26), Bristol (27) and Nottingham (28), the main stage at the Isle Of Wight Festival on June 10, support James at Manchester Castlefield Bowl on July 7 before heading to the Victorious Festival in Portsmouth on August 27.