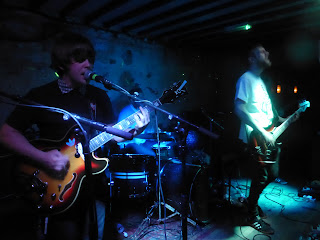 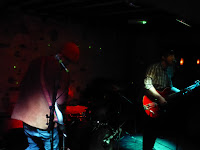 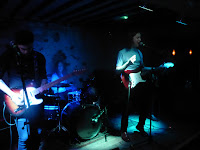 Fresh from the traumatic experience of having all their gear stolen whilst on tour in Paris, The Lucid Dream roared back with a scintillating show at Liverpool's Shipping Forecast on Saturday night to an adoring crowd that helped crowdfund them to carry on. Support came from Strange Collective and Pale Rider.

This is apparently only Pale Rider's third gig but you wouldn't guess that from the stunningly cohesive and uplifting five-song set that they grace us with. With a front man with a voice that can soar off into the stratosphere and drop us back down into the grime and dirt and a drummer who dictates the songs with a subtle change of pace or a brash bold explosion of power, they look set to become a fixture in the North West's flourishing underground music scene for months to come. The rest of the audience seem to have the same revelatory moment as we do as they deliver delicious psych-tinged moments such as One Beat and their set-closing Chlorine Eyes. Pale Rider are definitely one to keep a very close eye on.

Strange Collective are next up and the hometown four-piece deliver an impressive set of garage-influenced rock that's far from as strange as their name might suggest. Songs are carried along on the weight of their own momentum, often by the power of two vocals, and there's a innate sense of melody underpinning their songs like Supertouchy and Frog Eye that charm both their gathered friends, and they've brought an impressive crowd with them, and those of us hearing them for the first time.

The stage is set for The Lucid Dream though, a band that defies any sort of categorisation and now defies anyone who dares to try and finish them off by stealing the tools of their trade. There's an old saying that what doesn't kill you makes you stronger and it feels like there's more than just a triumphant air of survival tonight, but a new sense of clarity and purpose as they play these final shows supporting last year's third album Compulsion Songs before heading into the studio to make album four. Mark quips "Up to two months ago we all thought you thought we were wankers" before thanking those of us in the room that contributed to the crowdfunding program that lifted them out of that dark moment in Paris. 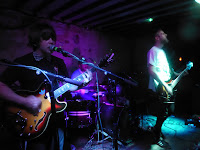 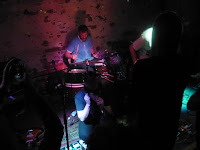 They start in their traditional manner with nine minutes of the instrumental Mona Lisa that ushers in their second album. It's typical of their raw uncompromising approach that their hour and a quarter set only covers nine songs, yet for those in the hot and sweaty basement of The Shipping Forecast, they're one of the most compelling and important bands around. Bad Texan and I'm A Star In My Own Right, the two stand out tracks on Compulsion Songs, feel like more than mere songs, they take the listener on a journey through their creative minds, heading off at unexpected tangents, but with all four of them together as one. Their final three songs - 21st Century, Nadir and Epitath - run together into one half hour trip of pulsating, hammering drums, expertly controlled pedal and fret board work and changes of pace and direction that send the front rows into delirium and almost over the amps.

Their encore goes back to Sweet Hold On Me from their Songs Of Lies And Deceit and Morning Breeze from the second album and as the clock strikes eleven you sense neither the band or the crowd want them to stop. The good news is that they have no intention of doing so despite the heartbreaking moments they endured so recently. You can sense the huge appreciation of the outpourings of love towards them, both in the room and outside it. The Lucid Dream are a very special band to those that get them, that love them for their absolute refusal to conform, to tone themselves down and their willingness to stand and fight.

The Lucid Dream's website can be found here. They are also on Facebook and Twitter. They play Manchester Deaf Institute next Saturday (13 May) with tickets available here.