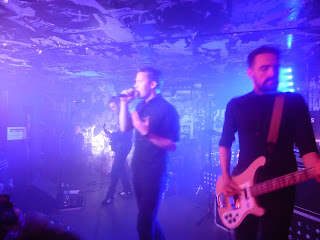 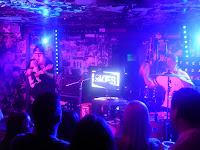 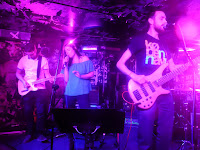 The penultimate night of The Slow Readers Club’s UK tour saw them head to the North East for an intimate sold-out show at Newcastle’s Think Tank. An ecstatically received set of both old and new songs served to confirm the growing belief that they’re going to be a major player nationwide once they’ve hit the festival fields this summer and completed their third album. Support came from Folkestone’s brilliant SKIES and local three-piece Denature.

Despite being very different from the two bands that follow them, Denature get a good reception from the growing crowd during their set. With no drummer, their sound is heavily based around synths and guitars, but at the centerpiece of it is Anna’s affecting voice. They don’t try and be too showy and this accentuates the simple quality of songs like Loss and Time, the title tracks from their two EPs. Equally impressive yet understated is their cover of Radioactive and they leave a really positive impression. 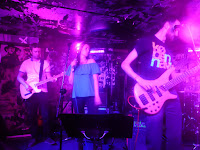 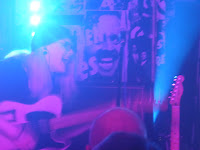 SKIES are next up and they’ve already built a rapport with the Readers audience on the tour dates so far with their magnificent high-energy set and the absolute joy that Alie and Jericho clearly get from performing to crowds of this size. Their visual impact is almost as impressive as their sonic one. In moments they’re almost a pop band, in others they channel big rock and roll monsters. They use programmed tracks to add to their guitars and drums to fabulous effect whilst the light show simply adds to the powerful impact of their set. It already feels like a collection of big singles, some of them like Leave Me, Hold On and their most recent one Afterwards already are but the likes of Monday and Drone are no less outstanding.

Their energy is infectious and catching, Alie bounding around with the hugest grin on her face, whilst Jericho stands arms aloft ready to deliver the killer blow to songs with his drums. They share lead vocals throughout a set that makes it impossible for you not to warm to them. They make music fun without it ever being throwaway and the audience respond to that even those to whom they’re a new experience. 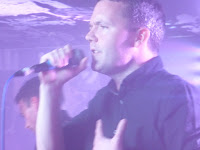 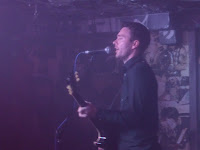 The anticipation is at fever-pitch by the time the Readers make their way to the stage, the intro music almost drowned out by the bellowing of their name, something that continues throughout at the end of each every song.  It’s testament to the bond they’ve built with their ever-growing fan base that they inspire such devotion. When Aaron says mid-set that it’s amazing for people to be singing along in such numbers, you have to wonder whether it’s fully sunk in the impact his words and his band’s music have.

It’s an impact that spreads across the set. The tracks from their 2011 debut feel fresher, more potent and powerful than ever – Sirens, Block Out The Sun, One More Minute, Feet On Fire and Lost Boys – and fit in seamlessly with those from Cavalcade which form the bulk of the set. The two new songs Lunatic and Through The Shadows demonstrate that the success they’ve had in the past eighteen months thankfully hasn’t dampened their creative spirit; in fact they point to their third album at least matching if not surpassing the enormous high they created with Cavalcade.

It’s easy to see why this band mean the world to those singing back every word to them. These are dark songs if you sit down and read the lyrics out of this context, but like so much of the very best music, the context of the song and the live performance make them talk to people, to share experiences, to show that you’re not alone, those fears, worries and troubles are not something that just you face and by joining together with like-minded souls you can fight them.  The best music is that which makes a connection and it’s impossible to deny that is exactly what The Slow Readers Club do. 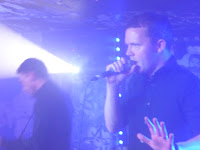 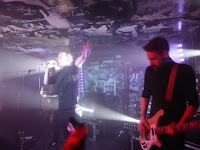 You sense that they’re loving the gig as much as we are. Aaron has developed into a confident, assured and engaging front man, leaning over the front rows as he delivers his words, his trademark stomp being replicated by many of us down on the floor. Jim smiles at cries of devotion from a man in the front row whilst delivering bass lines that are so razor sharp they cut through the stunning light show that they’ve brought with them, whilst Kurt, effortlessly cool as ever, even cracks a smile at one point. Drummers are often overlooked, but David’s contributions, particularly at the breakdowns where his beat provides the timing for everyone’s clapping, should never be overlooked.

As two hundred and fifty pairs of hands are raised skyward and the clapping and singing back almost drown out Aaron on the main set closing Forever In Your Debt, possibly their most direct and affecting song in a set where all of them are, you can’t help but sense that there’s now an unstoppable momentum behind them. For an unsigned band with no management or label, with day jobs, to be able to have achieved what they’ve done so far, is remarkable in an industry that’s often more about who you know than about what you can deliver. It feels like the whole thing is going to get much much bigger very soon.

The Slow Readers Club played Fool For Your Philosophy, Sirens, Start Again,  Days Like This Will Break Your Heart, Block Out The Sun, Lost Boys, Lunatic, One More Minute, Plant The Seed, Through The Shadows, Feet On Fire

The Slow Readers Club can be found at their website.  They are also on Facebook and Twitter.  The tour continues at Leeds Belgrave Music Hall (19). They also play Dot To Dot Festival in Manchester (26), Bristol (27) and Nottingham (28), the main stage at the Isle Of Wight Festival on June 12, supporting James at Manchester Castlefield Bowl on July 7 before heading to the Victorious Festival in Portsmouth on August 27.