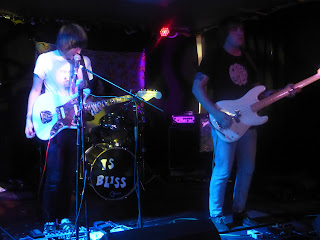 Portsmouth's Is Bliss have been making waves across the country with the release of their two EPs Velvet Dreams and The Honeycomb Explosion and they stopped off in Manchester as part of their tour with Flying Colours for a Sunday night show that had brought a decent crowd in to see what all the fuss was about.

For a three-piece Is Bliss make quite a phenomenal amount of noise, yet out of it comes melodies and hook lines that could melt the hardest iciest of hearts and it's for that reason that they're being so highly tipped at the moment in the underground recesses of the music industry. It's why there are many bands in the audience tonight to check them out, to see what the fuss is about, and despite sound problems which exacerbate after they've played, they deliver a set that is sure to just heighten the excited whispers going round about them.

Ostensibly they're here to promote their The Honeycomb Explosion EP and three of the songs from it form the centre point of tonight's set. Dreamy atmospheric moments where they reach for the upper corners of the room, all widescreen in their ambition, merge into cacophonies of guitars and drums fighting each other for space within the blink of an eyelid. The repetition at the end of the six minute plus Alive (Baby Come On) feels like a mantra being chiselled into our consciousness, whilst Inner Soul takes a softer, more alluring way to our hearts and minds but is no less successful in its pursuit.

They're just highlights though of a set that's ambitious in its scale, in the way they twist their sound many different ways, but on each turn come up with something that makes the ears tingle with excitement, whether it be the deep rumbling bass, the vocals set back in the mix to the point where they're almost inaudible or the final twisting of the effects pedals at the end of an expansive Lure off Velvet Dreams to leave us impressed by the sheer scale of their sonic ambition.

Email ThisBlogThis!Share to TwitterShare to FacebookShare to Pinterest
Labels: Is Bliss