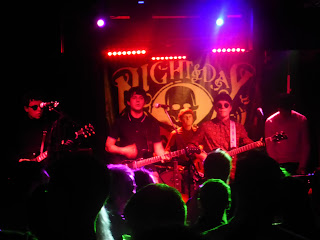 Scotland's Vida concluded their This Feeling tour with a headline slot at Manchester's Night and Day Cafe on Saturday night. A band that wears their influences loud and proud on their sleeve, they're smart and accomplished enough though to avoid sounding like a tribute band.

Thirty seconds into Vida's set we fear the worst. Two of the band are wearing sunglasses, we've been greeted by a "hello Manchestah" straight out of that Kevin and Perry scene, but then something happens that allays our fears.

Vida are actually pretty damn good. We can forgive them their debut single that takes its name from and sounds and lyrically rips Oasis's Fade Away because it's so damn blatant yet incredibly powerful in its impact "the dreams we had as children fade away" versus "our childhood dreams fade away" whilst another grabs that Columbia riff and makes it all their own. We forgive them because despite the reservations that creates we can't help be impressed by the swagger and style with which they pull it off.

Whilst other bands are making a career out of being a piss poor pastiche of big names, Vida are no such thing. Jamie has that sort of vocal style that begs to be sung along with in big halls and fields and the rest of them deliver the riffs and the big uplifting tunes that set off crowds in those places. Even their cover of Bitter Sweet Symphony, and let's face as a group of five lads you need a massive set of bollocks to even attempt it, feels like that end of the night pissed up singalong with mates hugging each other and that captures the essence of what they and This Feeling are about.

We leave thinking we probably shouldn't like them but we do.

Email ThisBlogThis!Share to TwitterShare to FacebookShare to Pinterest
Labels: Vida