Siv Jakobsen / We Were Strangers - Manchester Gullivers - 1st May 2017 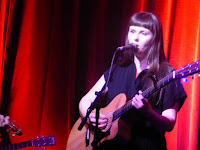 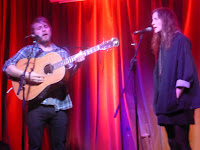 Touring in support of her recent single Like I Used To ahead of the release of her debut album, Siv Jakobsen and her band provided a welcome relief to the bank holiday blues with an intimate delicately constructed set at Gullivers in Manchester. Support came from We Were Strangers, fresh from the release of their own debut album Beneath A Broken Sky.

We Were Strangers are Stefan Melbourne and Chloe Leavers, a pair of finely matched vocalists who, live, perform together to the sound of Stefan's acoustic guitar alone, which gives those two voices all the space they need to accentuate and pour emotion into the words of songs like Giving It All and Darling I from the album. The contrast between Stefan's rough-edged to Chloe's softer tones adds real gravitas to the songs, which, although being played solely on the acoustic guitar, have a sense of depth to them that comes from the intensity of the performance which is mirrored in the way you can hear a pin drop in the pauses such is the way they hold the attention of the audience, which is no mean trick. 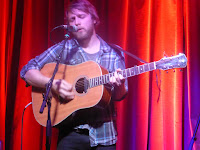 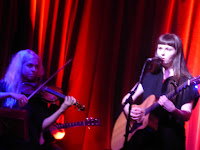 Siv's set-up is her on acoustic guitar with Einar on keyboards and backing vocals and Sophie on violin and tonight is apparently the first time they've played together in this set up and the other two had only just flown in from Norway today for this run of dates. It'd be difficult to tell that from the intuitive way the three of them create the perfect atmosphere for Siv's delicate, softly-spoken songs as well as creating a very very different take on Britney Spears' Toxic mid-set. These are songs that need you to listen to them and, again, the Gullivers audience treat them with the respect they deserve much to Siv's delight.

The combination of violin and keyboards gives the songs the feeling that they're piercing your skin and claiming control of your senses and imploring you to give them your undivided attention. There's no need for the volume dial to be turned up, despite the bass from the downstairs bar, as it's the quiet understated power of three musicians playing in perfect harmony that gives Siv's songs their undeniable impact.

Whether the songs come from her recent EP (Dark, How We Used To Love, Bullet and Fix You) or from the forthcoming album (To Leave You, Black And White, Crazy and single Like I Used To), the end result is the same as the smitten audience fall under her spell. This isn't lost on Siv as she becomes more engaging between songs, asking us to move forward to fill up the spaces at the front, joking that they've showered, telling us to dance or do what we want to the songs "within reason." For us, we stand and listen, soaking in the moments where the real beauty of the songs permeates through and disarms us completely. Without the need for grand gestures or big statements Siv Jakobsen uses much more subtle, yet no less successful, methods to win us all over.

Email ThisBlogThis!Share to TwitterShare to FacebookShare to Pinterest
Labels: Siv Jakobsen, We Were Strangers