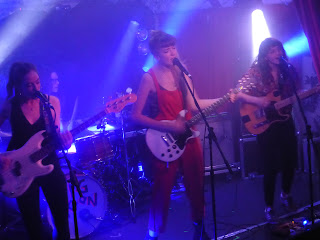 In tour in support of their magnificent debut album Love In The 4th Dimension, The Big Moon's debut Manchester headline show was a triumphant sold-out gig at the Deaf Institute, a venue that will soon feel like an intimate warm-up once they've charmed and slayed festival fields all summer.

They pull no punches right from the off. Silent Movie Susie, one of their early singles, is a firecracker opener, with Celia and Soph's vocal harmonies providing the wave on which to lift up Jules' lead somewhere into the stratosphere. It's the sound of sixties girl groups crashing head first into the riot girl tourbus with spectacular results. That they repeat the trick but never the outcome is testament to their inate understanding of what makes great alternative pop music; like all great pop music you'll find yourself involuntarily singing one of the hooks for days in your head yet this is everything but throwaway or disposal. And when they let loose on Formidable, Bonfire, and the album's title track, they dispel any suggestion that they can't mix in a harder heavier edge too. 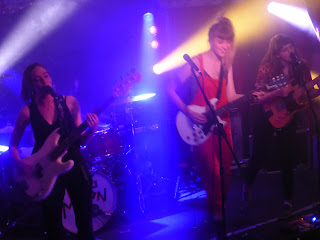 It's also a huge amount of fun. You can see how much Jules, Soph, Celia and Fern, eyeballing each other one minute, the next turning round bumping backsides and moving away. Whilst the between song chat with the crowd might be a little awkward at points, it's genuine, unscripted and, in a world where you feel bands know exactly what they're going to say, it's a breath of fresh air. Jules even jokingly starts to try and play Wonderwall at one point before her bandmates' laughter stops her.

The live sound is much heavier than the recorded version on Love Is The 4th Dimension, from which they play all eleven tracks, but never loses the buoyant joyful spirit of it. They also play early single Nothing Without You, slow things down with Celia and Fern playing keyboards on b-side Something Beautiful and deliver their wild stop-start-bang cover of Madonna's Beautiful Stranger that makes the song their own. 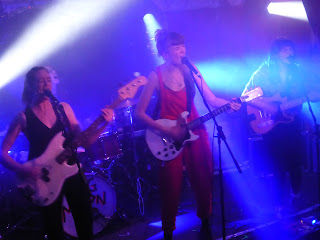 One look around the crowd and people, girls and boys alike, are singing every word back at them. The Big Moon matter, they mean something to people whilst being a whole world of fun in the progress and they're about to kick through and destroy the industry's glass ceiling that so many other female bands hit their heads against.  That makes them the most important young band around. As well as delivering the album of the year to date, this was the gig of the year so far.

The Big Moon played Silent Movie Susie, Nothing Without You, Happy New Year, The Road, Cupid, Love In The 4th Dimension, Beautiful Stranger, Zeds, The End, Pull The Other One, Formidable, Something Beautiful, Bonfire and Sucker.

Email ThisBlogThis!Share to TwitterShare to FacebookShare to Pinterest
Labels: The Big Moon