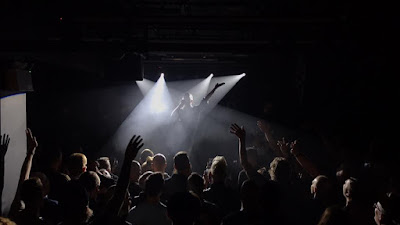 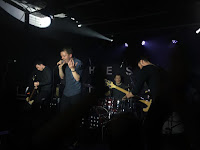 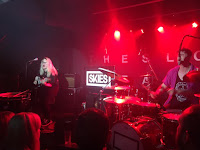 The seemingly unstoppable rise of The Slow Readers Club continued with their highest profile headline London show to date at a sold-out revamped Borderline on Tuesday night and a set that had the packed tight crowd singing back every single word of every song, even the two that are as yet unreleased. Support came from Folkestone's brilliant Skies.

Skies open up proceedings as they are doing on each night of this tour amidst a set of their own dates to promote their new single Afterwards. The two-piece of Alie and Jericho go down a storm with the crowd and it's not surprise given that it's impossible not to be drawn in by the infectious beats and grooves of their songs and the sheer overpowering breathless energy of their performance. With Alie on guitar and Jericho on drums, sharing vocals and making judicious use of backing tracks to set the feet tapping and the pulses racing, there's a lot of love for them in the room by the end of the set, which they finish with the magnificent Drone. It's rare to see a band having so much fun up on stage and that transmits back to us too. You can keep all your preening and posturing for other times, Skies don't pretend to be cool, but that is exactly what makes them it. 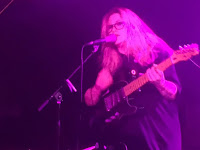 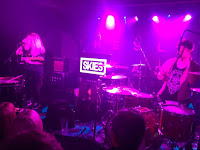 The now omnipresent READERS chants strike us as the music is turned down and the band make their way on to the stage. There's hardly room to move down the front, testament to the pulling power that The Slow Readers Club have these days and everyone appears to know every word of every song, even the two new ones - Lunatic and Through The Shadows - that have appeared on the web streams of previous gigs. Aaron has problems during the first song with a dicky microphone connection, but such is the confidence in the band at present, it doesn't him faze one bit.  Fool For Your Philsophy is a great opening salvo, a punishing drum beat ushering it in and continuing to drive the song throughout, the line "this is my darkest moment, I feel my fear take over me" gets spun round into a celebration, a collective banishing of demonic spirits and it's this that means they can take their place at the end of the line of great Manchester bands that have the magic to do just that.

Whilst that theme runs through the songs, like those giants of Manchester's musical past and present, it never once feels like they're rehashing the same ingredients. Sirens, from their debut, talks of going crazy, yet when the chorus kicks in and Aaron points out into the darkness at the back of the room, it feels like an exorcism that we're all party to with the kiss-off "I've had enough, some day it's got to stop" that feels like a mantra being chanted. Start Again, with the crowd aping Aaron's clock-like arm movement in the chorus, is similarly an expulsion of dark thoughts into something more uplifting. 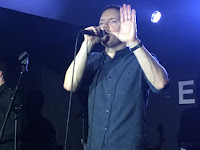 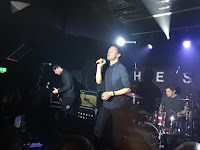 Days Like This Will Break Your Heart slows things down, revealing another string to their bow and a more soulful richer sound and a broader range to Aaron's voice. It's another reason why they stand out, the change of pace doesn't in any way anesthetise the impact they have.  Lost Boys sees Aaron share vocal duties with brother Kurt, an interesting contrast that we hope they might look at again on the third album they're in the process of recording. It's also interesting to note that whilst Cavalcade has gained all the plaudits and made the breakthrough for them, people here know all the words from the debut too. The first of the new songs, Lunatic, again has Aaron exploring the outlying ranges of his voice to great effect and David's once-underrated drumming and Jim's exciting rhythmic bass lines taking control in the instrumental sections. If this is representative of the new material they're currently writing then their future looks in very safe hands.

One More Minute threatens to steal the show. It's a very old track, dating back to the pre-Readers band Omerta who released it as a single in 2006, but it doesn't betray its age at all, a soaring verse with the ominous "I can't look back, I close my eyes to the world" exploding into the chorus "stop right there for one more minute, I'm not sure that I want in it" being echoed back by the three hundred or so acolytes hanging on every word. The READERS chant is almost deafening.  It's followed by Plant The Seed which has the same delirious effect as does the second new song Through The Shadows, which already feels like an old friend to the assembled masses.

The main set finishes with the two big singles from each album - Feet On Fire from the debut packs so much of a punch live than it does on shiny disc, from Aaron's now infamous Starkie stomp to the chorus whilst Forever In Your Debt is a triumphant exultant unashamed declaration of love that should have put The Slow Readers Club in venues like this when it was first released a few years back.

Once the ritual is dispensed with to chants of READERS from all corners of the venue (as well as a strange declaration of love for Jim from the front row and some idiot shouting RATS), the band start the encore with the title track from Cavalcade, a claustrophobic brooding building song that often gets overlooked with the powerful anthemic songs around it, but it still has that undeniable power that all their songs posssess. 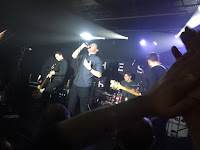 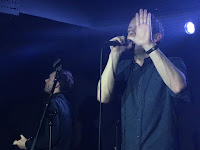 They have a false start on I Saw A Ghost, understandably given the heat got too much for one gentleman at the front who hits the deck a few feet away and has to be carried out in full view of them, but once they restart it, it's very evident why the song means so much, carved from a deep, dark part of the mind and opening it out into something which everyone here in the room can relate to. It's brave, raw and revelatory "I am wasted, I am useless, come and dig my earth", but out of the darkness comes light in the way the chorus does what so much before it has and expels the demons in the words.  They finish with Know The Day Will Come, which also finishes Cavalcade, a brooding yet uplifting finale which hints at a more positive time in the future.

There are a lot of great bands around, there are only a few whose music can be life-changing, that get you through all the shit life throws at you and makes you feel like you're not alone in those moments. The Slow Readers Club are one of those bands. And very soon a lot more people are going to know that name.

The Slow Readers Club can be found at their website.  They are also on Facebook and Twitter.  The tour continues at Sheffield Plug (April 29), Newcastle Think Tank (May 13) and Leeds Belgrave Music Hall (19). They also play Dot To Dot Festival in Manchester (26), Bristol (27) and Nottingham (28).