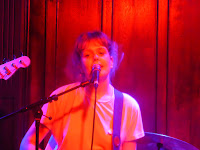 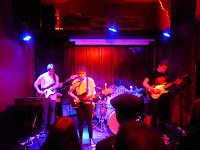 Pip Blom recently supported Surfer Blood at Soup Kitchen and impressed enough of us to pack out The Castle for her return a few weeks later. A nine-song set full of hooks, melodies, energy and some genuine rock music power from the nineteen-year old Dutch singer and her band left us all hotter and sweatier than when she started and went down a storm with a crowd waiting to be impressed.

The songs focus heavily around the vocal interaction between Pip and Tender, often working in tandem and other times almost fighting for space, but never getting in each other's way. There's an immediacy to them as a result that's often missing from songs that you don't know too well. Songs start at breakneck speed, stop dead in their tracks, catching the audience out who think they're done, and then spin back round in the opposite direction.

There's an insistent quality to the likes of opener Taxi Driver, recent single Think I'm In Love, Truth and Feel Nothing that it's impossible not to get caught up in. Pip never stands still throughout, hair flying from side to side as she steps from side to side, breathlessly belting out these three minute gems that feel perfectly formed, classic sounding (hence their accessibility to the new listeners) but with a personality all of their own that comes from the coming together of the four of them.

A smile never leaves Pip's face throughout, even when she's complaining about the ridiculous heat in The Castle, something not helped by the lighting which normally never stands out here, but which is perfectly atuned to what the band are creating.

The set flies past way too fast; the songs themselves adhere to the mantra that less is more and don't hang around longer than they need to. Pip Blom are producing a serious urgent frazzled mix of rock music with great poppish undertones to some of the songs. They're like a breath of fresh air.