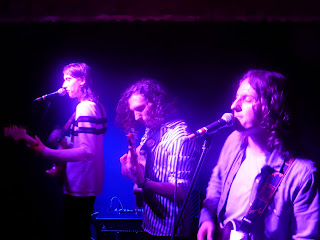 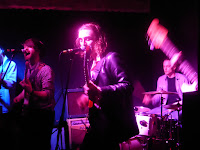 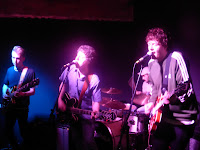 Dantevilles played two sold-out shows at Jimmy's in Manchester over the weekend after announcing their biggest headline set at Sound Control for June. With the recent buzz being generated around latest single Graffiti, it feels like their star is in the ascendancy and we went along to see whether the growing fuss is worthwhile. Support came from The Nix and Cleargreen.

The Nix open up proceedings and leave a very positive impression. The five-piece don't hold back with three guitarists yet their songs aren't simply an overpowering six-string onslaught, but they're laced with infectious melodies that draw in even those not familiar with them prior to the set. They save their recent single Fear Of Change until the very end, and whilst it's a set highlight, there's plenty more here that suggests, like the headliners, they've got a bright future ahead of them. A song called Space Between in particular stands out a real potential future single. In the same vein, they use two vocalists to great effect, allowing them to offer something a little different in style and intent to many of the bands around. Their songs also have a delicious groove to them that makes you want to tap your feet (or dance if you're brave). The already packed Jimmy's crowd love them and rightly so. 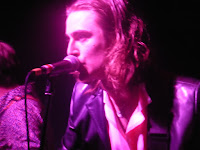 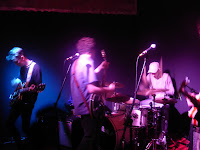 Cleargreen have brought their own crowd with them and there's chants of "Cleargreen" even before they've started playing. Their approach is a little more direct than the other two bands on the bill, full on and headlong in direction but they deliver it with an energy and a ferocity that means not just their gang at the front are drawn into songs like Too Fast, Washing Machine and Stargaze as a mosh pit develops. Front man Aleister has a strong powerful voice that fills the room, passionate, urgent and delivering his words like he means them more than anything else in the world.

Dantevilles have been on the road for the past month on their first UK tour and it's immediately obvious as they break into opening track Mould This Shapeless Grass that it's brought them even closer together and those insistent grooves that run through the very core of everything they do are even more fluid than ever before, Conor and Jamie's vocals act in unison and lift the songs and give Dantevilles a distinctive sound all of their own. They're more than just that call and response combination though, that would be doing a disservice to Paul and Cory - as early track The Fighter reaches its conclusion the drummer has left his kit and is stood on one of the guitar amps egg shakers in hand. Connor's out amongst us at this point, having fought his way into the packed crowd that know the words to most of these songs. 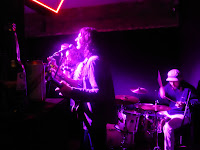 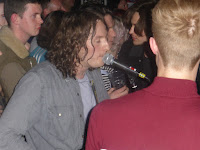 Recent single Graffiti is a natural stand out as are crowd favourites It Might Be Tomorrow and the set closing Perfect Place and there's a new song that's untitled on the setlist that feels like it could also be a future single. As they progress we suspect some of the other songs, particularly the earlier ones, might fall by the wayside as their songwriting throws up more and more new material that matches those highlights and surpasses it. There's a real sense that they're building up to that, the response they're getting would seem to confirm that too, an unstoppable momentum that's going to send them to the places they dreamt of playing when they first started a band. For now, the dark decadent basement of Jimmy's is their perfect place.

Email ThisBlogThis!Share to TwitterShare to FacebookShare to Pinterest
Labels: Cleargreen, Dantevilles, The Nix