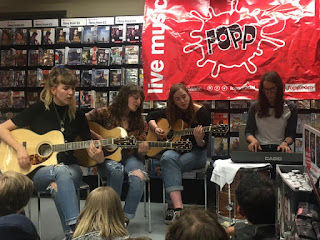 In support of their excellent debut album Love In The 4th Dimension, The Big Moon played an intimate completely unplugged eight-song acoustic set in the basement of Fopp's Manchester store. Fighting colds and the shop going about its business, they delivered beautiful stripped-down versions of the songs that retained the hooks and melodies of the originals but gave them a completely different spin.

These in-stores are often dull and uninteresting three-song things that are there to promote the record that's just come out, but it feels like The Big Moon believe that would be short-changing the hundred or so fans that are sat or crouched between the aisles to watch them. Despite Celia telling us that her and drummer Fern are suffering from the flu, none of this detracts from the way they translate the versions of the songs from Love In... to this format; often the songs will stop dead and then kick back in with one, two or three of them using their voices as an instrument to accompany the three guitars and improvised drum kit that they have at their disposal. 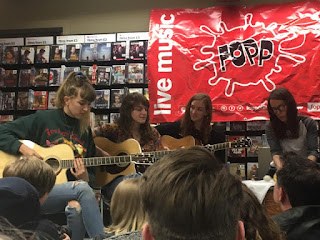 The reason all this works so well is simply the quality of the songs. Each of the eight they play have an intrinsic simplicity and joyfulness to them that they work equally well with the layers removed as they do on the album, despite Celia telling us that the album versions are much better and Juliette telling us that they haven't even rehearsed The End. The playfulness of songs like Formidable, Pull The Other One and Silent Movie Susie, that make the album such a pleasure to listen to, full of ear worms that are guaranteed to lighten your mood and make you smile, is retained in these versions, the grins on their faces throughout mirrored by those sandwiched between the shelves. There's also a real feeling of togetherness between the girls, a knowing glance leading to giggles, but also a sense that they're a tightly-knit gang that have each other's backs and the tightness of the performance, despite the unusual circumstances is testament to that.

In Love In The 4th Dimension, The Big Moon have produced an album of the year contender. This stripped-down performance of eight of the songs from it simply confirmed that fact, but also provided a different slant on songs that will have people singing them back to them in their thousands come the summer.

The Big Moon played Silent Movie Susie, The Road, Cupid, Pull The Other One, The End, Formidable, Happy New Year, and Sucker.

Email ThisBlogThis!Share to TwitterShare to FacebookShare to Pinterest
Labels: The Big Moon