Once in a long while a band that comes along that breaks the mould, refuses to play by the rules and stands aside from everything else around it. Those bands might not get the recognition they get at the time. Ist Ist are one of those bands and we went down to the basement of one of Manchester's newest venues The Peer Hat to witness their latest trail of destruction.

There's a sense of anticipation in the crowd ahead of the band coming on stage from both seasoned Ist Ist followers and those drawn in by their burgeoning reputation as the most intense live music experience in the city. They start with their last but one single Silence, the one that had people comparing them to Joy Division. They play a snippet of Digital later in the set, then stop and Adam laughs that "because we sound just like Joy Division right?" Whilst the rest of the songs don't sound like them at all, they do have that same untamed wild spirit and ferocious inner core that draws in any one who likes music played loud and in your face and in their not very sweet way they're every bit as important at a time where the mainstream of music is blanding out with every Ed Sheeran or Adele takeover of the charts.

The tools at their disposal are quite simple - guitar, bass and drums - aided by a frankly astonishing light show that isn't for the faint-hearted such is the power of the white lights that feel like they're hurtling towards you from the stage, carrying the music in their wake, sweeping you off your feet and into the euphoric reaction that the devoted audience give them. 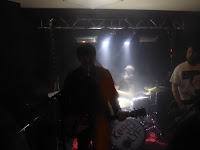 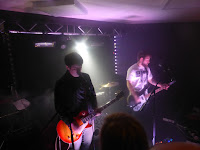 Those songs put any comparisons to the sword. There is no one like Ist Ist around. Things Will Never Be The Same again is a majestic cacophony of noise with the song's title repeated over and over again, one second softly sung, the next at a blood-curdling, eardrum-splitting scream before the bass comes in and takes the song off in another direction. Love Song is one of their earliest songs, but it's been transformed from the early demo that introduced us to the band - and we have to be straight here, listening to Ist Ist's recorded output can only mildly prepare you for the live experience. Emily is dedicated to Adam's wife and is one of the strangest love songs you're likely to hear "Emily, I'm sick of crying over you.... one day we'll get it right" whilst 1-2-1 also adopts the lyrically less is more philsophy to stunning effect with Joel's almost tribal drumming dictating matters whilst guitar, bass and vocals roam looking for their next victim.

Recent single Strangers feels like a welcome respite when it hits towards the end of the set, the big soaring chorus something we've not heard from them previously, but they do it without compromising. White Swan, with its "ist ist" sample running through it is equally as potent and they finish the night off with fan favourite Rats, which people have been shouting for all night. A guy in a rat mask goes over the monitor, Adam comes out into the crowd, they slow the song right down into something very sparse and dramatic before letting loose in a whirlwind of drums and strobes that threaten to imprint themselves on our eyes and ears for life as everyone goes wild for one last time.

Ist Ist are a phenomenon. They are the most exciting and best unsigned band on the local circuit in Manchester at present by some distance. Words don't do justice, and never will, to the live experience which isn't for the faint-hearted. You may hear them and hate them, that's your loss. It feels like there's a growing movement behind them though, that people, once they get over the initial terror, are falling for their horrific slaughterhouse charm.

They play a free entry show at London Shacklewell Arms (May 12). There are limited edition CD singles of Strangers available, limited to 100 and more than 80% sold before launch, at their merchandise store.