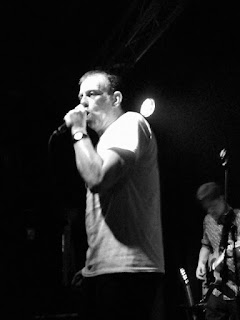 A capacity crowd embrace an energetic Tom Hingley and his band The Kar-pets as they deliver a 90 minute Inspiral Carpets tribute.

Before headliners Tom Hingley and The Kar-pets take the stage, they are ably supported by local lads The Apparells, a 5 piece who deliver a well received set, creating a Hammond infused sound. Opening with Touchdown, they bare a passing resemblance to Indian Rope era Charlatans. Other tracks like Runaway have more of an REM flavour before the epic Disposition brings their set to an end. We look forward to hearing more from them.

Tom Hingley is no stranger to Glasgow, a city that always took Inspiral Carpets to heart. Celebrating the 25th anniversary of The Revenge of The Goldfish album, Tom and his band - Malc Law and Ste Pierce from his rock n blues trio The Tom Hingley Band - are joined by Philip John on guitar and Dickon Kyme-Wright on keyboards, playing the album in full.

More accustomed to solo shows, Tom Hingley is positively ecstatic as he pogos around the stage backed by his band as they soar through album opener Generations. There's a mutual love and respect shown from both audience and Hingley from the off and the big tunes from the album - Generations, Bitches Brew, Dragging Me Down and Two Worlds Collide - sees the crowd sing along with every word.

Revenge of The Goldfish, Tom’s third Inspirals album released in 1992 was packed with songs that could easily have been singles -  Saviour, Smoking Her Clothes and Mystery have all stood the test of time and it is a real treat to hear them presented live. Here Comes The Flood sees Tom augment the band by adding additional acoustic guitar. Album closer Irresistible Force is for me the pick of the bunch tonight.

To round the evening off, the band sail through an eight song best of set, with Tom's first outing for the Inspirals, Joe, starting things off and closing with a rousing Saturn 5. In between the audience are treated to the power pop of Find Out Why and classic album tracks Directing Traffic and Sackville. Sackville sees rhythm section Malc and Ste at their best. I Want You is a treat with a menacing vocal from Tom. She Comes In The Fall even sees Tom improvise the ending before the biggest audience singalong of the night, This Is How It Feels.

Throughout the show, Hingley has as much energy and vigour as he displayed a quarter of a century ago. The Return of The Goldfish tour continues intermittently over the coming months up and down the country with another visit to Glasgow mooted for Christmas time.

Email ThisBlogThis!Share to TwitterShare to FacebookShare to Pinterest
Labels: The Apparells, The Kar-pets, Tom Hingley