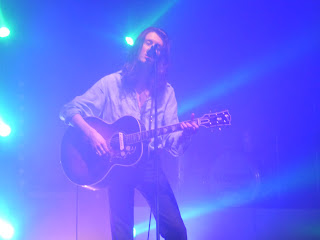 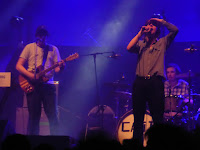 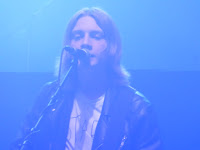 The final night of this year's NME with V05 tour (yeah, whatever) rolled into Glasgow's O2 Academy on Saturday night. We caught up with Blossoms, Cabbage and Rory Wynne's three-carriage Greater Manchester express in a packed out crowd of delirious teenagers.

Rory Wynne has problems right from the start. The sound is shit, the worst I can recall at any gig in any sized venue. It was so bad you couldn't have blamed him if he walked off, it got to the point where you couldn't hear any separation on the instruments apart from the drums and his vocals were too low in the mix. Undaunted he rushes through the tracks from What Would Rory Wynne Do? EP, stopping only to admonish some idiots throwing what look like Nazi salutes, quite rightly demanding security dispatch them. Things get slightly better with the sound so that final track Why Don't You doesn't sound like it's being played on a bluetooth speaker hidden under pillows. We know enough about Rory to know what he's delivered to date and his immense potential but he got the rawest of raw deals that was none of his doing in the Academy. 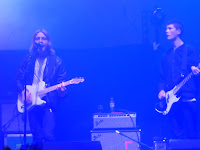 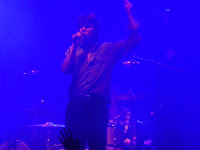 Things are thankfully much improved for Cabbage as clearly the message had got backstage. Lee now seems far more mobile since his broken pelvis although he doesn't brave coming down into the heaving mass that greets Uber Capitalist Death Trade, Necroflat In The Palace and a particularly wired Dinner Lady. Recent single Gibraltar Ape has worked its way back into the set, particularly apt given the weekend's news, and shows that Cabbage have many strings to their bow. A big mosh pit forms and people are singing along to every word of these powerful angry songs about exactly what's wrong with the world these days. Against all the odds, their slightly bonkers approach seems to be making a crossover to kids starved of a band with such an uncompromising approach to their art.

Blossoms' weapons of choice are far more conventional of course, wearing their influences on the sleeve of the cd that provides the soundtrack to the set up of their stage. Their magic is in how they fuse so many classic elements from across the decades to create something that feels timeless. Getaway and Blown Rose are wistful musings on lost love that everyone in the room sings back to them at a volume that drowns out Tom to the point he stops singing in awe and simply conducts. At Most A Kiss, Blow and Cut Me And I'll Bleed have a harder psyche pop edge to them as the bouncing masses lay testament to, whilst their customary set closer Charlemagne sees semi-organised chaos on the floor as circles are formed then closed.

Unlike so many bands at debut album stage, Blossoms have so much more to them than a few singles and a lot of padding. Their revival of the classic EP means we also have the dark brooding Smoke and the eighties dance floor nods of Polka Dot Bones, Across The Moor and Fourteen to supplement album tracks like Texia and Deep Grass that mere mortal indie bands on the circuit would kill to have just one of. 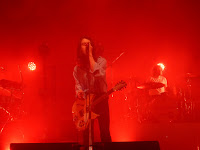 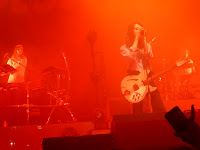 They pull it off with style too. They've been on tour long enough to be a well-oiled machine, but it never feels like they're going through the motions. Tom has developed into a front man who the boys and girls look up to and hang on to every word, especially as he seeks a recently dumped audience member to dedicate My Favourite Room to and then leads us through a medley of You're Gorgeous, Half The World Away, Last Christmas and Don't Look Back In Anger.

They're far from a one-man band though as Charlie demonstrates with backing vocals that lift the songs at just the right moment and Joe's unflappable driving energy on the drums. Josh is a little more reserved but on Deep Grass and Smoke his often overlooked prowess comes right to the fore, whilst Myles, perched up at the back, provides their signature electronic wizardry.

There's an unstoppable feel to Blossoms right now, every step up is shrugged off with a confidence and ease that suggests they're on the way to being the biggest young band in the country by the time they get to album two.